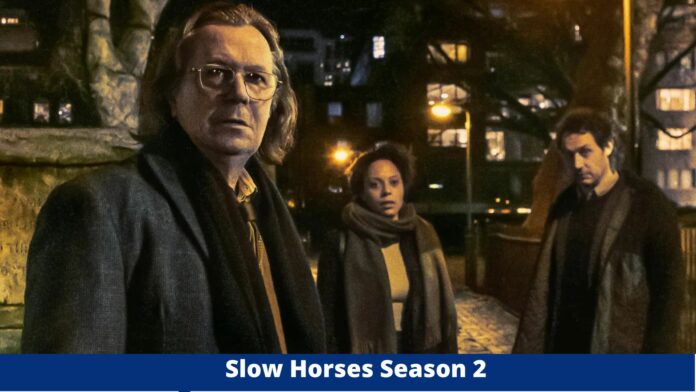 Slow Horses is a British espionage thriller television series based on Mick Herron’s 2010 book of the same name. The series’ first two episodes debuted on Apple TV+ on April 1, 2022.

Slow Horses season 1 has concluded, after an intense and stunning ending.

While Hassan has been released, the kidnappers have been killed or imprisoned, and Lamb and his team have cleared their names, there are still a number of loose ends, not the least of which is the shocking flashback explaining how Lamb ended up at Slough House and why he harbors such a grudge against River.

Naturally, fans are already clamoring for more from the Apple TV+ espionage series, and those who stayed to the end may have gotten a hint as to where things may head next.

Continue reading to learn all there is to know about Slow Horses season 2.

All bets are off now that it has been disclosed that the actors and crew filmed two seasons consecutively; Apple TV+ may release the second season whenever it pleases. There is no need to wait a whole year.

If, however, the first season’s audience reception is favorable, Apple TV+ is likely to want to begin production on a third season immediately.

If this happens, the second season will almost certainly be published midway between the first and third seasons. At the moment, we’re forecasting late 2022.

Who will return for Slow Horses season 2?

The majority of the Slow Horses cast has already been confirmed to return.

At the conclusion of the first season, Jackson Lamb and the rest of ‘Slough House’ were instrumental in freeing Hassan, the Pakistani youngster abducted by the right-wing organization Sons of Albion.

This has huge ramifications for numerous of the characters, which will most certainly be addressed in the future second season. With that stated, let us take a look at what fans might anticipate.

With Jackson as the boss, there are certain to be some power struggles between him and Diana of MI5. After all, the latter attempted to implicate him for her undercover operation’s errors, which almost resulted in Hassan’s death.

Will both of them maintain their promise to stay out of each other’s business after agreeing to send over Diana’s incriminating images in return for Charles Partner’s file?

Equally, with the audience now aware that Jackson murdered Charles, would Jackson’s refusal to inform Catherine of the truth haunt him? She was sceptical of Jackson’s version of events, and this could always be revisited.

How will River deal with being trapped at Slough House, from one guy to another? After assisting in the rescue of Hassan, it was expected that he would return to work at the Park.

However, when it became evident that this was not the case, might there have been another reason for his continued confinement at Slough House? Apart from his career difficulties, there is an ongoing mystery surrounding Sid’s location.

Throughout the first season, it was evident that the two have chemistry, although one is defined by Sid’s mockery of River’s ineptitude.

While they did not proclaim any interest in one another, River expressed profound regret when he first believed she was dead.

However, now that it has been shown that she may have restarted her life, would River attempt to search her down with the assistance of Roddy, as foreshadowed in the season 1 finale?

In keeping with the pair concept, Louisa and Min Harper experienced their first kiss in the first season. Their shared loathing for Struan evolved organically into a friendship, which later blossomed into a relationship. Will the pair survive, or will Slough House be lured into other enterprises at their expense?

Finally, how is Robert Hobden doing? M15’s chief of security, Nick Duffy, shoved him in front of an oncoming automobile in the season one finale to quiet him.

After all, Hobden was aware of Diana’s involvement in Hassan’s abduction, which he wanted to publicize. Will Hobden return after the audience was held in suspense as to whether he survived or died? And, if he does, will he expose MI5 in the process and take on politician Paul Judd?

Let’s take a look at the Slow Horses trailer below.

Where can I catch a screening of Slow Horses?

Slow Horses is an Apple Original and is available only via Apple TV+. Apple TV+ offers a seven-day free trial to new customers.