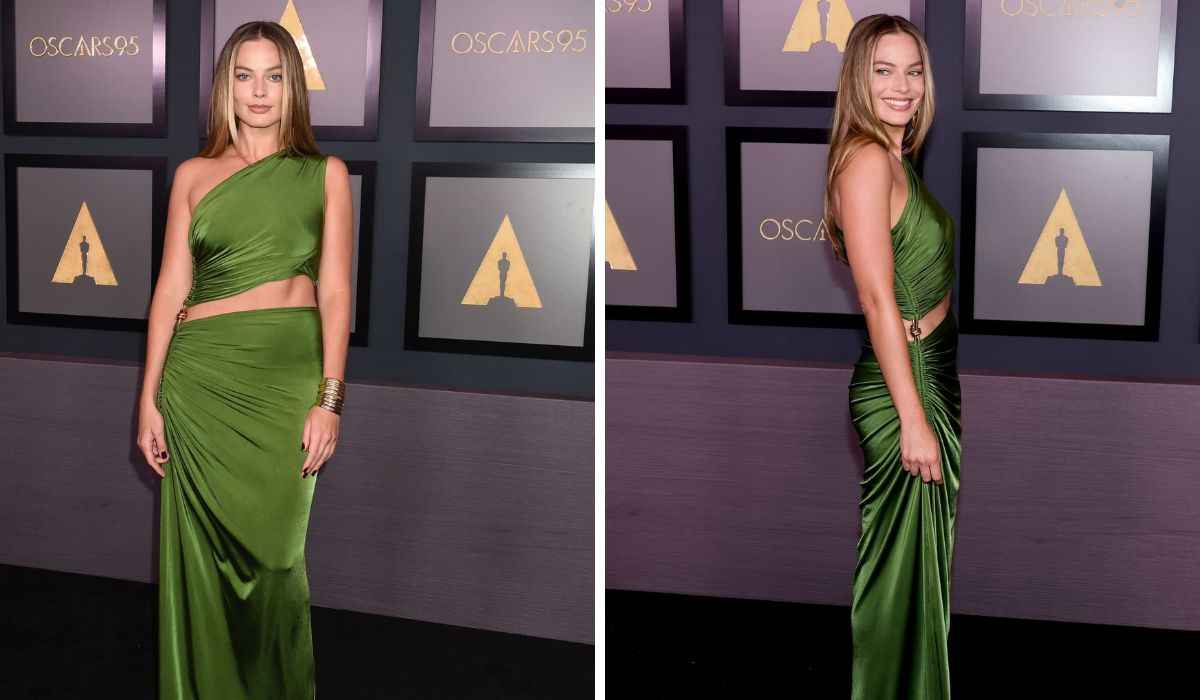 Margot Robie Stuns the event with her astonishingly bewitching beauty by making herself comfortable in an ostentatiously green attire thereby being the cynosure of the event. At the thirteenth annual Governors awards that were held on November 19, 2022, which took place in Los Angeles, CA she became one of the enrapturing stars who really stole the show.

The awards granted by the Academy’s Board of Governors included the Irving G Thalberg Memorial award, The Jean Hersholt Humanitarian Award, and the Honorary Award. Margot Robbie in the satin green outfit posed on the carpet and the entire camera lens was absolutely on her and clicking her from umpteen angles.

The fashion choice of her attire included a cutout section in the middle and one over-the-shoulder sleeveless section which made her look inexplicably stunning.

Moreover, the beautiful bird had decided to her hair down and parted in the middle complementing her accessories to the satin green dress with thick gold bracelets and earrings. Her nail was painted with black nail polish which further added to her beauty and she also wore shoes that were concealed by the long bottom of the dress but in spite of all these things her nonchalant smile was the main appealing factor and she flaunts her dress with the effulgent smile she possesses,  stole the entire camera lenses.

In the star-studded event, being the cynosure of the event Margot Robbie really gave a mind-blowing effect to the eyes that looked at her. Moreover, besides Margot Robbie other stars who made the event even more stupendous includes, Jennifer Lawrence, Olivia Wilde, Cate Blanchett, Kala Gerber, and more.

The resounding event took place at the Fairmount Century Plaza Hotel in Los Angeles. The event was followed by an after-party which made the event even more amazing by making the attendees familiar with each other.

By appearing in a highly astounding way Margot Robbie, alongside the most handsome and sophisticated actor, Brad Pit was promoting her new upcoming movie titled Babylon. So now Margot Robbie being the cynosure of the event really helped to put a spotlight on her even more and thereby gaining more love and affection.

Moreover, before entering the mega event and vowed at the Governor’s award she made another spectacular appearance on the cover of Vanity Fair earlier this month. On the cover of Vanity Fair, Margot Robbie made herself again the epitome of exquisiteness by wearing a tight black short-sleeved bodysuit where her hair was down which even made her look fabulous by all means.

Among these trending pictures of Margot Robbie, she was lately clicked when she was leaving one of her friends’ home, by one of the paparazzi in which she seemed really perturbed and talked about her stance in one of her open interviews.

Morgan Freeman in World Cup Opening Ceremony: Why Was Freeman Wearing a Gloves?

Margot Robbie At A Glance

Margot Elisa Robbie is one of the bewitching and enrapturing Australian actresses and producers are best known for her riveting roles for which she has garnered a plethora of accolades.

The stupendous actress was born on July 2, 1990, and she is now at her golden age of thirty-two. She was born on the outskirts of Dalby, Queensland, Australia and she stepped into her career in early 2008.

Her parents were Doug Robbie and Sarie Kessler, her father was a former farm owner and her mother was a physiotherapist. She has three siblings including, Anya, Lachlan, and Cameron. Being one of the energy-packed children from a very tender age itself Margot Robbie harbored her deepest passion for acting.

Margot Robbie surprisingly excels in trapeze and the credit goes to her mother for enrolling her in a circus school when she was a small child. She attend Somerset College where she studied drama and acquired a graduation degree and a few commercials and films on her resume, Margot Robbie decided to move to Melbourne to take her passion seriously and professionally.

The career milestone of Margot Robbie came when she got the golden opportunity to star as the wife of the protagonist of Jordan Belfort in The Wolf of the Wall Street a biographical comedy by Martin Scorsese. She got the opportunity to star next to Leonardo Di Caprio and one of the iconic scenes in the film where Margot Robbie slaps Di Caprio ultimately gave her the path to conquer all her dreams.

The film Wolf of the Wall Street was an irrefutable massive hit and Margot Robbie was nominated for her mind-blowing performance in the film and she won the Empire Award for Best Newcomer. After the major success, she decided to spread her wings in producing films and she aimed to produce more riveting female-driven projects.

LuckyChap Entertainment was the production company that she co-founded along with her husband Tom Ackerley, Sophia Kerr, and Josey McNamara who were their long-time friends. After that Margot Robbie got another chance to star along with Will Smith in Glenn Ficarra.

Other remarkable roles of Margot Robbie include Jane Porter in The Legend of Tarzan, Harley Quinn in Suicide Squad, Birds of Prey, and Tonya Harding in I, Tonya one of the biopics where she received tremendous critical acclamations.

She was undoubtedly one of the riveting and enrapturing actresses who really had hordes of fans across the globe for her nuanced performances which really portrayed her immeasurable caliber as an actress.

The Daily show is one of the highly acknowledged American television shows with a paramount amount of viewers across the globe. So now the current change that happened in this late-night talks and satirical news television program is that...
Net Worth

Wendy Williams is a broadcaster, media personality, businesswoman, writer, and actress from the United States. She has hosted the nationally syndicated television talk show The Wendy Williams Show since 2008. As per reports Wendy Williams' net worth is...
Net Worth

Jenna Ortega is one of the most effulgent rising stars of the industry who just rose to prominence for starring as Wednesday Addams one of the most riveting roles that she had ever portrayed, in the comedy horror Netflix...