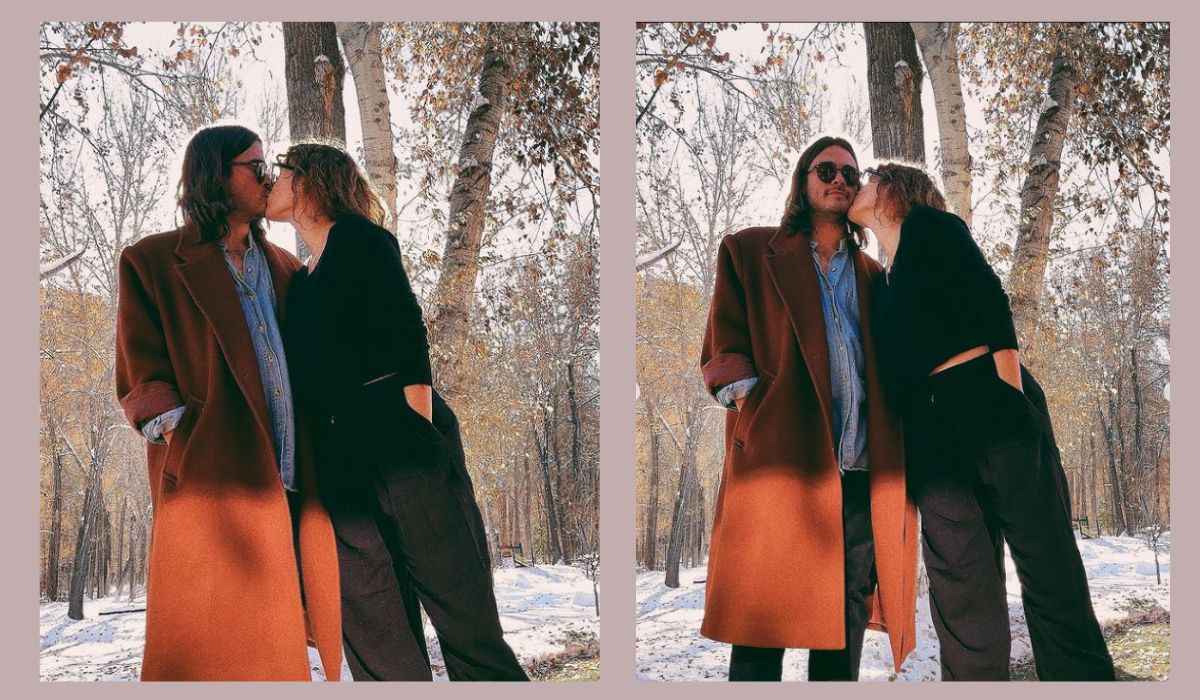 The snaps which showed some sweet moments between the couple amidst the gorgeous fall outdoors were posted by the actress on her Instagram account about two days back. The photo was posted with no specific notes but was accompanied by a series of smileys like two hearts, a scorpion, a ladybird, and a few more.

In one photo Rumer plants a kiss on her boyfriend Derek’s cheek and in another one, the couple is seen sharing a smooch. In some of the pictures, their dog can also be spotted posing with the stars.

In the photos posted, Rumer is spotted wearing an all-black ensemble which also included a pair of black sunglasses, while her boyfriend was seen wearing a denim button-down which was paired with dark jeans. He also wore a burnt orange full-length coat and paired it with dark sunglasses. With the addition of a stunning fall backdrop, the couple looked gorgeous and they both seemed very happy to have each other’s company.

The relationship between Rumer and Derek was made public amid her father, the A-list Hollywood actor Bruce Willis’s battle with aphasia.

In August 2022, the musician was spotted sharing a birthday wish for Rumer Willis where he wrote that, in the short time they had been together, Rumer has filled his life with joy and peace. He also added that everything was just easy with her and she was such a magical human being. He ended the note by thanking her for coming into his life and for the moments they had spent together.

Rumer also hinted at their close relationship when she mentioned Derek in one of her Instagram stories earlier this year. On May 27, she wrote that @derekrichardthomas and @thehailmaries are the most talented singer and songwriters that she had heard in a very long time or even ever.

Even though both the stars have mentioned each other, and their close relationship over social media a few times, nothing has been mentioned about their relationship until now.

Who is Rumer Willis?

Even though Rumer Willis is popular as an actress, she had been in the spotlight right from her childhood as Willis is the eldest daughter of A-list Hollywood actors Bruce Willis and Demi Moore.

She was born on August 16, 1988, in Kentucky. Rumer Willis completed her formal education at Wildwood Secondary School, LA, California and she was also enrolled at the Interlochen Arts Academy in Michigan. Rumer also attended the University of Southern California but she dropped out after one semester from the University.

Following the footsteps of her father and mother, Rumer Willis also took up the career of an actress and made her debut in acting along with her mother Demi Moore in the 1995 film ‘Now and Then.’ Rumer also appeared in three movies with her father. One of the most notable performances of Rumer Willis can be seen in the 2009 movie ‘Wild Cherry.’ Willis has also appeared in different hit TV shows like ‘The Secret Life of an American Teenager,’ ‘Miss Guided,’ and many more.

Before her association with the musician Derek, Remur Willis was known to have relationships with people like Armie Hammer, Jayson Blair, and Maeve Reilly.

Who is Derek Richard Thomas?

Derek Richard Thomas is an upcoming musician who is a member of the music band Vista Kicks. Derek is the frontman of the band. The band focuses on indie music and Derek generally promotes his music through social media platforms like Instagram. Derek Richard Thomas has almost 4,000 followers on Instagram.

The band of Derek Thomas named Vista Kicks is a trio which is based in Roseville, California and the band members of Derek are Trevor Sutton and Nolan Le Vine. The band has released four albums and one EP as of 2022.

Not only just a singer, but Derek also takes up the role of a producer for the band ‘The Hail Maries’ which comprises sisters Victoria and Makayla. The young musician gave a hint about his relationship with the actress on her birthday in August when he added a post describing the relationship he shared with Rumer.