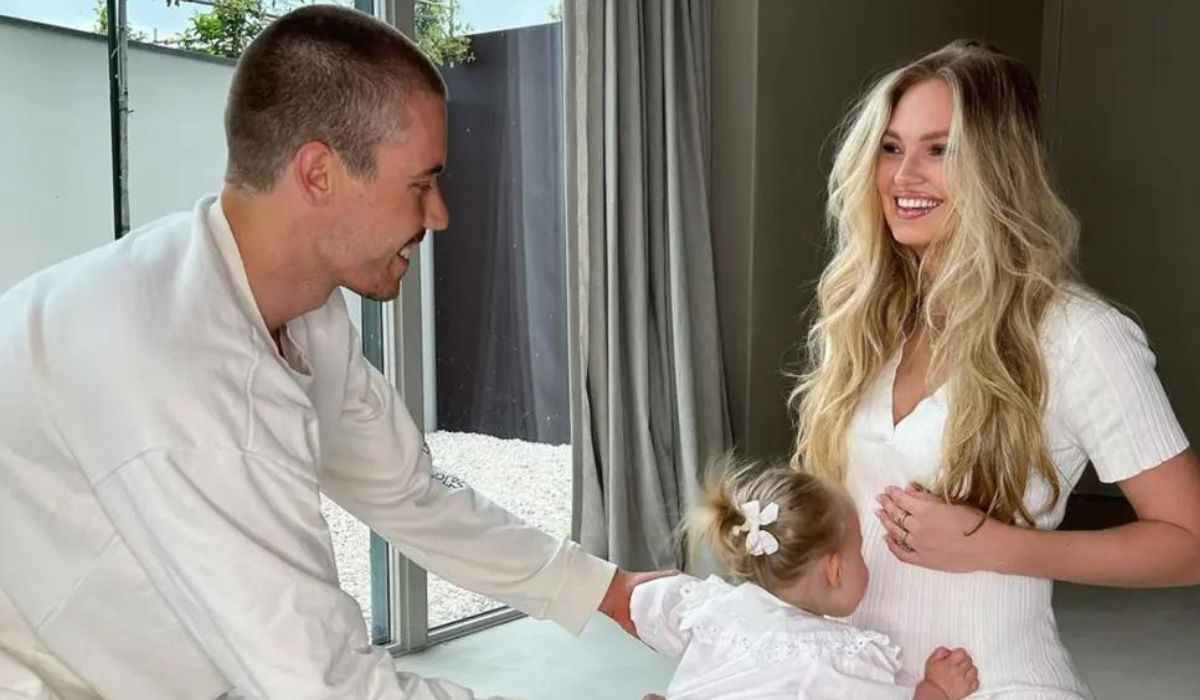 Victoria’s model Romee Strijd announced on Nov. 16, 2022, that she has welcomed her second child with her fiance Laurens van Leeuwen. Apparently, she has entered the second round of motherhood.

She made their baby’s Instagram debut on her page where she has 7.9 million followers. The new mama captioned the post, “June van Leeuwen 11-11-22.” The model mogul revealed her pregnancy back in May with a photo of herself showing her baby bump. She also told her followers that she was expecting “baby No. 2.”

The Victoria’s Secret Angel further wrote about her excitement about being a family of four and attached a family photo where she posed along with the Party Pants co-founder and their elder daughter Mint, who just turned 1.

Under the post, many were seen commenting, and apparently, she must have received tens and thousands of “congratulations” under the latest post.

Next in the grid was a picture where Romee’s first daughter was seen kissing the baby’s forehead. One among them had a snap of Laurens kissing the baby while June is sleeping peacefully in the arms of Romee. The picture appears like it was clicked at the hospital bed, right after the delivery.

In each of the photos, the infant is seen posing with each of the family members. Her comment section is filled with red heart emojis and heart-popping face emojis.

Rome’s first pregnancy was announced 2 years ago. Back then, she also shared about the struggles she had with polycystic ovarian syndrome (PCOS).

At the time she wrote on Instagram, “I was diagnosed with PCOS two years ago after not getting periods for the last seven years.”

She disclosed what exactly she went through initially as people told her normal pregnancy was not her thing, which devastated her the most.

She said that she was nearly overwhelmed to know that she would never be able to become a mom, whereas her dream itself was to start a family with Laurens.

Romee elucidated how she got her periods back as she continuously checked up on certain behaviors including food restriction and adding high-intensity workouts.

She was initially miseducated saying a woman with PCOS can never have a baby, whereas in reality, having PCOS doesn’t mean a woman cannot bear a child, instead, the process becomes a bit difficult as PCOS causes infertility, but is certainly curable. A healthy lifestyle can keep the ailment away and if a moderate weight is also managed, the risk is said to be reduced.

“We (Romee, her fiance, and their baby) are going to be a family of 3,” she wrote. Apart from sharing her happiness, Romee also shared a valuable message with every woman attempting to conceive. She said, “Love yourself and be nice to yourself,” which is the key to any door.

She asked all the other women reading her post to love themselves and their bodies and requested them to keep negative thoughts as away as possible.

“Feeling so blessed,” Romee gushed on Instagram back in December 2020. On Mint’s first birthday bash, the parents arranged such a cute setup in a grey and white theme. Romee shared an array of photos and under that, she wrote, “Cannot believe Mint is already 1. It was a special year.

Our lives have been entirely changed, from always being busy with work to being your parents in the Netherlands. We wish to take you to every place where we want to travel when everything gets sorted. You always make us smile. Love you.”

“I said yes,” the beauty mogul captioned alongside the proposal pictures. She was wearing an all-black and white attire and rocked her look with black shades. With open hair, her facial expressions spoke for her. The excitement she had for the moment was clearly visible on her face.

In the picture, Laurens was seen on his knees with the ring box in his hand, extended towards his love. They were apparently having brunch together, but it turned out to be one of the most memorable days of their lives.

She separately snapped the giant diamond ring that her fiance got her and received more than a bunch of comments for it.