Barry Season 3 Release Date, Cast, and How to Watch and More 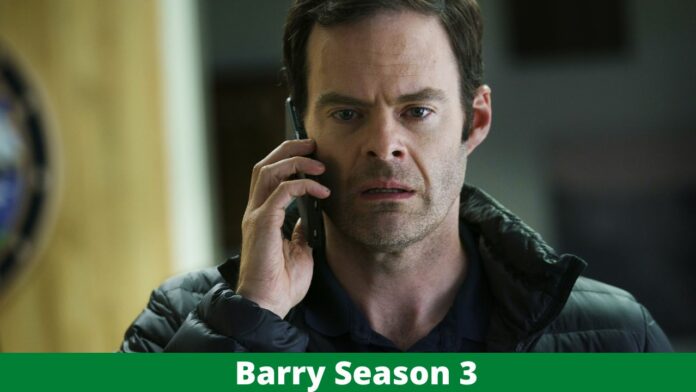 Barry is a dark comic criminal television show that premiered on HBO on March 25, 2018. Alec Berg and Bill Hader came up with the idea. Barry Berkman (Hader) is a Cleveland hitman who travels to Los Angeles to kill someone but ends up enrolling in an acting class taught by Gene Cousineau (Henry Winkler), where he meets aspiring actress Sally Reed (Sarah Goldberg) and begins to question his life path as he deals with his criminal associates such as Monroe Fuches (Stephen Root) and NoHo Hank (Anthony Carrigan). The second season premiered on March 31, 2019. In April 2019, HBO renewed the series for a third season, and a fourth season has been written. The third season, consisting of eight episodes, will premiere on April 24, 2022.

Barry has received critical acclaim, with the majority of praise going to its writing, humor, characters, and performances (particularly Hader’s and Winkler’s), as well as numerous accolades, including 30 Primetime Emmy Award nominations; Hader won Outstanding Lead Actor in a Comedy Series twice, and Winkler won Outstanding Supporting Actor in a Comedy Series for his performance in the first season. For the second season, Winkler, Root, and Carrigan all received Emmy nominations for Outstanding Supporting Actor, while Goldberg received a nomination for Best Supporting Actress.

Fans were yearning for more episodes following the Season 2 conclusion, but now that the program has been off the air for years, Barry couldn’t be more eagerly awaited. As Season 3 approaches, we’re breaking down what we know thus far.

When will Barry Season 3 be released?

After a lengthy wait, we now know when Barry Season 3 will premiere. HBO started in February 2022, and the show will return on April 24, 2022.

Its release, like many others, was pushed back owing to the epidemic. The program was in pre-production when COVID-19 struck, causing everything to come to a halt. In April 2020, Henry Winkler told PeopleTV that the cast was all prepared to conduct their second table read when they were informed of the postponement. The series wasn’t able to go through production and filming until the summer and fall of 2021. While it has been a while, the good news is that the program is finally returning, and Season 4 will not be far behind. In a January 2021 interview with Seth Meyers, Bill Hader said that, despite the fact that production had not yet begun, he had already written Season 4 in its entirety. We’ll take as many Barrys as we can get!

What will the third season of Barry be about?

It’s probably going to be sad and dark. If you recall, Barry Season 2 concluded on a sour note. There’s no doubting that a titular character is a terrible person with a big B. He is not a repentant murderer; he is a killer-killer, as proved by the monastery full of criminals that he slaughtered in cold blood in retaliation for his handler Fuches (Stephen Root). Furthermore, he permits his acting instructor, Gene Cousineau (Winkler) to be jailed for the death of Cousineau’s girlfriend—a crime that Barry committed. Cousineau discovers his pupil is a cold-blooded assassin in the last minutes of the episode, stating, “Oh my god,” before the credits roll.

According to Variety, Hader teased this ambiguous promise when accepting an award from USC in April 2021: “So much of it is about following your emotions and remaining loyal to your personalities. You get both hilarious and terrible results when you do this.” Anthony Carrigan, alias Noho Hank, predicted “very risky stuff [coming], but the scary stuff makes for the most wonderful stuff” in an interview.

Barry Season 2 had a resoundingly enthusiastic reception from the audience. At the end of the second season of the show Barry, we see Hank go to Barry for aid, but Barry refuses to appear.

Following that, Fuches seeks protection from Barry and mediates peace between all three gangs, bringing Hank and Cristobal back together in a wonderful and heartfelt reunion.

Later, after looking for a Chechen pin of Hank near the corpse of Moss, which was hidden there by Barry, the police released Gene to his son, Leo.

Following that, Barry attempts to contact Gene but instead speaks with Leo. Leo informs him that Gene has been cleared of all charges and has been freed.

Barry subsequently informs Leo that his father was correct and that the people murdered all of the gang members, including Mayrbeck and Esther, because he chases Fuches.

Fuches makes a successful escape. Noho Hank Batir’s successor, dispatched from Chechnya, discovers Hank alive and at the temple, and is later delighted with him for murdering Esther.

After that, Gene recalls what Fuches said to him right before leaving Gene with Moss’s body — Barry Berkman did this.

Let’s take a look at the cast of Barry’s third season.

The cast of the upcoming television series Barry Season 3 is listed below.

The trailer for Barry Season 3 has not yet been published. It will be available soon. The official trailer for the second season of Barry can be found below. HBO released it on February 22nd, 2019. Let’s have a look.

Where can I see Season 3 of Barry?

Season 3 will have eight episodes, five of which will be directed by Bill Hader. The series will air on HBO and will be accessible to watch on HBO Max.