Joey Defrancesco, the munificent Jazz Organist, saxophonist, and trumpeter of America died on...
HomeEntertainmentLove Is Blind'...

Love Is Blind’ Season 2 Release Date: Everything We Know So Far! 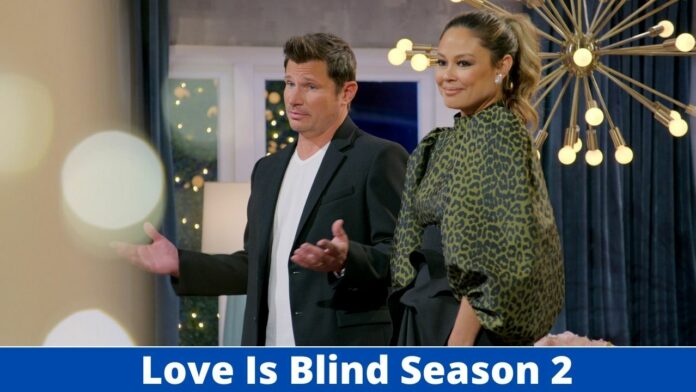 Love Is Blind will return to Netflix for a second and third season. The Vice President, Unscripted Originals & Acquisitions at Netflix confirmed the announcement, saying, “It’s been fantastic to see Netflix members everywhere respond to the raw, realistic stories of real people and real stakes.”

“We take pleasure in crafting a favorite program for every taste, and we’re happy that fans embraced all of these shows with such zeal and shared passion.” We look forward to bringing even more excitement to our members.”

From the premiere date to the trailer, here’s everything we know about the second season of Love Is Blind.

Love Is Blind fans will finally see a new crop of singles enter the pods after a long wait. The burning question, of course, is whether they will find whether love is genuinely blind.

Following its launch in early 2020, the series became a major sensation for Netflix. Love Is Blind, hosted by Vanessa and Nick Lachey, follows a group of singles on their adventure to find love without ever meeting their possible mates.

“With no outside distractions, the singles converse to a stream of potential love interests, and when a significant connection is forged, they propose and then lay eyes on their fiancé for the first time,” according to a Netflix synopsis. “Now that the couples are engaged and back in the real world, they will rapidly learn whether they can transfer their emotional connection into a physical one before the fast-approaching ceremony.”

In an announcement video released on Tuesday, the streaming service revealed the season 2 cast. Shayne, a Chicago-based realtor, teases those who tune in for the 10-episode series that they will be “in for quite a ride.”

Some contestants have high expectations for their possible mates.

“I hope they prefer big dogs because I have a really big German Shepherd,” communications major Mallory adds, while executive assistant Salvador says, “I’m most enthusiastic about finding a best friend; somebody to share adventures with.”

Contestants like Abhishek “Shake,” a veterinarian and DJ, admit to being nervous about entering the pods. “One thing I’m concerned about is falling for someone only to discover they’re not in this for the proper reasons,” he says.

Danielle, an associate marketing director, admits she is “terrified” that her personality will be discovered to be “insufficient.”

“I’ve always been insecure about how I looked,” she continues, “and have taken pride in how I act with people.”

Following the first season of Love Is Blind, only two couples were married at the altar: Lauren Speed-Hamilton and Cameron Hamilton, as well as Matthew Barnett and Amber Pike. In November 2021, both couples celebrated their third wedding anniversary.

Despite not making it past the altar, Giannina Gibelli and Damian Powers choose to stay together. However, after their marital problems were highlighted as a major plot point in last year’s Gibelli, 28, revealed the couple’s split to Entertainment Tonight after the Altar special in August 2021.

According to reports, Gibelli is dating Bachelor in Paradise alum Blake Horstmann.

The second season of Love Is Blind takes place in Chicago. The first several episodes will be available on February 11, followed by four more on February 18. The season finale will be shown on February 25.

Scroll down to meet the 30 individuals looking for love in the pods ahead of the second season debut of Love Is Blind:

When will the second season of ‘Love Is Blind’ be released?

Season 2 of Love is Blind will launch on Netflix on February 11, just in time for the show’s two-year anniversary (and, I suppose, Valentine’s Day). The first five episodes will be released in conjunction with the debut, followed by four more on February 18 and the finale on February 25.

Is there a Love Is Blind Season 2 trailer available?

Yes! On the 13th of January 2022, Netflix released our first look at Love Is Blind Season 2, and while it doesn’t disclose any of the new participants, it does remind us of what pod life is all about.

What is the best way to watch Love Is Blind Season 2?

On Netflix, you may watch all of Season 2’s episodes. The season begins on Tuesday, February 11th.

Who will host Season 2 of Love Is Blind?

This season’s hosts are Nick and Vanessa Lachey, a married couple.

Season 2 of Love Is Blind has how many episodes?

The second season of Love Is Blind will have ten episodes.