Joey Defrancesco, the munificent Jazz Organist, saxophonist, and trumpeter of America died on...
HomeEntertainmentLegends of Tomorrow...

Legends of Tomorrow Season 7 Release Date Updates: Will There Be A New Season? 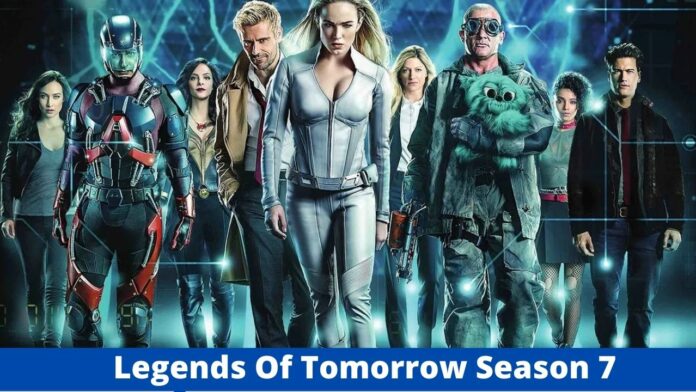 The seventh season of DC’s Legends of Tomorrow is now airing, with the tenth episode premiering on Wednesday, January 26.

The Legends have been battling their robot clones while trying to find their way back to their own time in Season 7.

There are three episodes left in the CW show, but they will not be released on a weekly basis as is customary. Everything you need to know about the season’s final episodes is right here.

The season will consist of thirteen episodes and will premiere on The CW on October 13, 2021.

Eobard Thawne (Matthew Letscher) will appear in next week’s episode of DC’s Legends of Tomorrow, and fans now know what his role will be in the next season thanks to yesterday night’s episode. The team flies back in time to save Archduke Franz Ferdinand’s life, therefore ending World War I, in the episode “The Fixed Point.” They didn’t want to save Ferdinand since it would cause irreversible damage to the timeline. Instead, they intended to save him for a short time, attracting the attention of the corrupted Gideon and “evil Waverider,” the season’s main antagonists. The plan was to seize control of the parallel Waverider while the evil robot Legends were occupied trying to fix the timeline anomaly and their Gideon was left alone.

One minor issue: in the DC Universe, time develops a sort of immunological response to the alteration of major events. As a result, Sara Lance (Caity Lotz) spends most of the episode attempting to save Ferdinand and failing, then attempting again and learning from her mistakes. Sara’s regenerative talents allow her to, as she says, “live, die, repeat,” despite the fact that a never-ending line of time-travelers have done it before and most have died.

Sara finds the nature of time’s “immune reaction,” which turns out to be a familiar face fighting against her interests, and things become a little more complicated than they appear. That’s when Eobard Thawne enters the picture.

This is not the Thawne who recently appeared on The Flash, but a version who is taking up right where he left off in Legends of Tomorrow’s second season finale when he was killed by the Black Flash. And, as previously stated, he is played by Matt Letscher, who is the “real face” of Thawne, rather than Tom Cavanagh, who plays the character with the face of Harrison Wells.
He doesn’t have access to the Negative Speed Force here, but the Time Wraiths have given him a technology that allows him to freeze time. He is stationed on the day of Ferdinand’s assassination and tasked with preventing any time travelers from attempting to travel back in time.

Enter Sara, who devises a method of evading the device and defeats Thawne in combat. Rather than killing him, she enjoys a drink with an old foe and tells him about her plan, as well as the fact that she has no desire to truly break time. He agrees to make it appear as if Ferdinand has been rescued, giving the Legends 40 minutes to face off against the Evil Robot Legends.

We’re guessing there’s more to Thawne than this. He is, after all, Thawne. What are the chances he isn’t planning to hitchhike on the Waverider to avoid his time-consuming public service? But, at least on the surface, we now know exactly what his function is in “Rage Against the Machines” next week.

The Legends are stuck in 1925 Odessa, Texas with a destroyed Waverider after battling the aliens and preserving Earth. Astra tries to use her skills to help solve problems, which attracts unwanted attention from the town and the incoming Director of the Bureau of Investigation, J. Edgar Hoover, as well as a surprise no one expected. Sara and Ava realize they need to get away, so they go on a crime spree with Hoover on their tail. Meanwhile, Zari is having trouble getting over Constantine, so Behrad offers the only solution he knows of.

Caity Lotz, Tala Ashe, Jes Macallan, Olivia Swann, Adam Tsekhman, Shayan Sobhian, Lisseth Chavez, Amy Louise Pemberton, Nick Zano, and Matt Ryan are among the main cast members who have returned. Dominic Purcell, who plays Mick Rory / Heat Wave, announced in February 2021 that he would depart the series after the seventh season because it was the final on his contract.  However, he stated two months later that he would be departing the show after the sixth season, but would return on a limited basis in the seventh.  In July, it was revealed that Ryan would be playing a new character named Gwyn Davies instead of returning as John Constantine and that Pemberton, who voices Gideon and has played a human version of her character on occasion in previous seasons, would be portraying human Gideon full-time  Former series regular Wentworth Miller was announced to return for the 100th episode in October.  Victor Garber, Brandon Routh, Courtney Ford, Arthur Darvill, Franz Drameh, and Falk Hentschel, all past series regulars, were announced to return the next week.

Season 7 of ‘DC’s Legends of Tomorrow’ is now available to watch online.

In the United States, new episodes are available to stream on The CW app the day after they premiere on television.