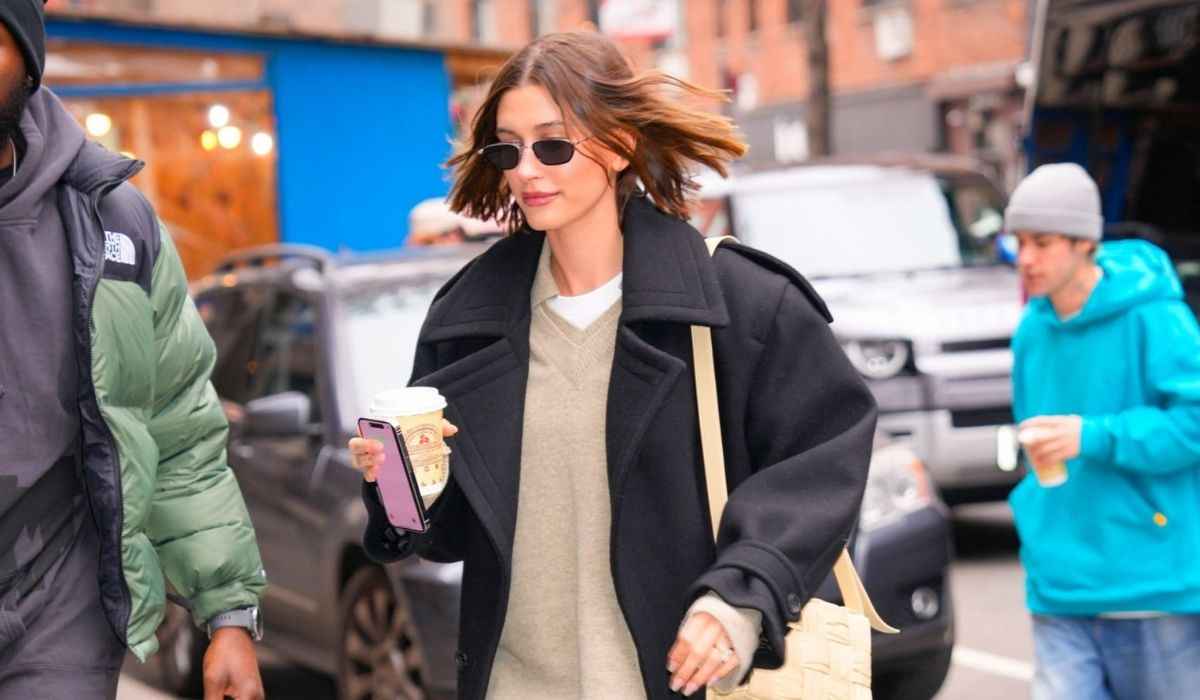 Hailey Bieber stuns her fans with her new haircut. The unbearably beautiful and compelling American model flaunts her new haircut to her eleven million Tik Tok followers captioning in a dramatic tone. It didn’t take much time for her fans to swoon over the new enthralling look which was so perfect for her.

It was on Saturday, the American model showed off her new look to her beloved fans on her Tik Tok. Her video captioned “oops” went viral within a matter of time and it was liked more than 286, 000 times.

In the video shared by Hailey Bieber, first, we could see her blue sneakers and then changes the angle of her camera to her backyard and suddenly flips the video thereby seeing her new bob haircut. She complemented her looks with rock shades and wore a black leather jacket where the University of Miami logo is emblazoned in green and orange.

Her new blunt bob haircut look would definitely prompt her fans to check out her style because the comment section was flocked with her fans. Among the umpteen comments, some of the comments were really catchy and interesting.

One of her fans wrote: “Hailey cuts her hair short, now everyone will cut their hair shot”. While another fan commented: “Now all the TikTok girlies are about to have this haircut in the next 5-7 business days”.

As we all know it is not the first time, that Hailey Bieber made her fans stunned with her new looks. She is not at all a stranger when it comes to new trends and looks. Last summer, she made her glazed donut nails and it became immeasurably viral on social media and it even draw the attention of Vanessa Hudgens.

Her nails were created by Los Angeles-based nail artist Zola Ganzorigt and they really complemented her silky white Saint Laurent gown and made her bewitching undeniably at the 2022 Met Gala.

Hailey Bieber made her new trends to acclimate to each season and each time she comes up with a new trend and her fans would be so pleased to see new innovative trends and that really makes her one of the beauty gurus.

So by having a new bob haircut, Hailey Bieber joined the club of short bob-cut groups of girls by joining with Zendaya, Idina Menzel, and other A-listers actresses.

Hailey Rhode Baldwin is the most stupendous and highly influential American model, media personality, and socialite. Her major highlight in her career as she got the golden opportunity to feature in major ads for Guess, Ralph Lauren, and Tommy Hilfiger.

Hailey Baldwin was born to a Brazilian of Italian and Portuguese descent mother and to a father of English, Irish, Scottish, French and German descent. Hailey was the cute youngest one of the Baldwin brothers and she was named after Hailey’s comet.

Hailey was homeschooled during her childhood and attended American Ballet Theatre in New York when she was in her teenage years. Hailey really aspired to become a professional classical ballet dancer, but an unexpected foot injury made her take a diversion from what she desired.  But her hard work made her one of the most intriguing and stupendous models of her time.

Hailey Rhode Baldwin is very appealing in her career and she had made her own space in the industry beyond being the label of Justin Bieber’s wife. But it was actually her relationship with Justin Bieber that made her mass entry into the spotlight.

Besides her incipient modeling career and other programs, Hailey’s name was known to some and unknown to many. But when she had a relationship with the world’s most popular Canadian singer, her name just started to reverberate in the whole world.

Because Hailey’s entry into Justin Bieber’s life was a bit dramatic, as it ended a long-term relationship between Selena Gomez and Justin Bieber who was the most acknowledged pair at that time. Even though Hailey had nothing to do with their break up, it really created internet strife all over social media.

So after having an on-again, off-again relationship, finally Justin Bieber and Hailey Rhode Bieber married on September 30, 2019. After the first encounter, both of them tried their best to keep their undeniable romance out of the hawk-eyed people. But fans were so obsessed with both of them and they were constantly in pursuit of making news.

So after their sudden unexpected reconciliation and big engagement announcement, their fans were so shocked and overwhelmed to process all this information within the snap of their fingers. So after many speculations, Justin Bieber made Hailey his love of life forever and they actually made it official in September 2018 at, New York City courthouse ceremony.

So after a dramatic relationship graph, they both are really leading a good life together so happily.