Andor Episode 1 Cast- What Are Their Specific Roles? 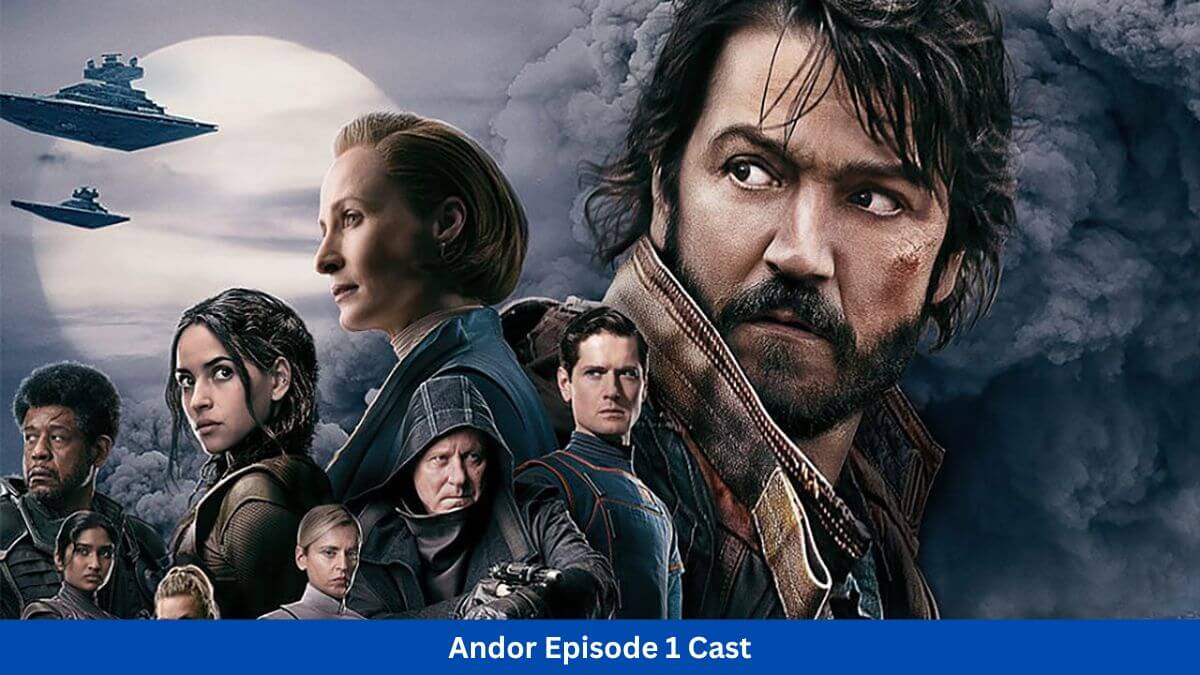 It is high time we get a prequel to the Star War spin-off film, Rogue One. We are finally returning to the galaxy after a long hiatus. This time, it puts plenty of meat on the bone as we are about to witness something like a return of Cassian on Disney+’s Andor- a thief turned-rebel spy.

Andor Episode 1 Cast! What We Know So Far!

The ensemble of Andor Episode 1 cast has already enthralled us coupled with its suspense and origin. Although we were expecting a continuation of Rogue One, we are getting a detailed history, which some of the enthusiasts must have hoped for.

Andor has only displayed his baby steps by far and is yet to disclose what it actually has in store, maybe not what we expect but what is beyond our creative insight. Whet your appetite to receive the endearing 24 generously sized episodes.

However, we recommend you be familiarized with the Andor episode 1 cast and characters before turning into the show on Disney Plus.

So far you must have realized that the show must have too much doom and gloom as well as light and cheer. But who are the cast chosen by the creators? What are their specific roles? Find it after the jump. The latest Star War series Andor Episode 1 Cast was unveiled!

Have you heard the name Cassian Andor in Rogue One? Cassian Andor is one of the members of the Rebel Alliance, someone who was adamant about acquiring the Death Star plans. However, he was not that kind of a guy earlier but turned out to be a strong freedom fighter over the course of years. But how would Cassion Andor, who had no idea of rebellion, change himself and turn out to be the extremist?

Luna is better known for his roles in Elysium, Milk, If Beale Street Could Talk, and League of Super Pets, other than Star Wars. Although he was only in countable projects, imagine how finest he would be, as he has been chosen as the lead of Andor.

Mon Mothma is a galactic senate and a politician who has pledged allegiance to the Empire since the Republic. However, she has got plans to secretly aid resistance forces and stand against the oppressive regime. In the Rebel Alliance, she would be a leading figure.

In an exclusive interview, O’Reilly stated that although her role carried importance as a senator, previously, this time, she would be focusing on the woman within her in Andor, which will be quite different from her past encounter. We will probably get to see what Mon Mothma will sacrifice, what she will risk, at what cost, and ultimately what she will fight for.

O’Reilly as an actor is versatile enough to pull off comedy-centric roles on Matt Leblanc’s sitcom Episodes as well as dramatic television roles in The Honourable Woman, Three Families, and Tin Star.

You will be new to the name “Luthen Rael” as he is a new addition to the franchise of Star War. All we know so far about the character is that he will eventually damage the burgeoning Empire, no matter what. However, the potency of his role is neither delegate nor terrific, leaving us more suspicious of his true potential in Andor.

When enquired about the role, Skarsgard replied that he is a person who is not appreciating the idea of good people and evil people for he believes the aforesaid sort of binary way to be the most dangerous one ever.

That is one of the major reasons why he is grateful for the ambiguity of the character. Even Skarsgard lacks a deep idea about his role, which might possibly have double life por triple life in Andor. In actuality, Skarsgard portrays two individual characters in Andor which make it interesting as well as fun to play.

We know that an incredible star, like Skarsgard, would astonish us in Andoe similar to how he left us flabbergasted through his major role in Marvel Cinematic Universe as Dr. Eric Selvig. The Pirates of the Caribbean’s Bootstrap Bill recently starred as evil Baron Vladimir Harkonnen in the sci-fi iconic Dune.

Although anyone might misunderstand her to be not having a good relationship with Cassian when the show begins, Bix is actually a longtime pal of Cassian. She is a skilled mechanic and owns a salvage yard, which she inherited from her parents following their death.

To RadioTimes.com. Arjona revealed bits of her character details, including Bex’s bravery and smartness. That was only a couple of traits, to begin with. Bex manages her salvage yard and goes well when it comes to negotiating, yet something must have happened between the duo, it seems quite complicated at times.

The two know each other, but when the trust is broken, the entire beads of a relationship would wither away. But he keeps coming back which compels her to stay strong.

Arjona, who is yet to be renowned among sci-fi and thriller enthusiasts, has credits for the films, Morbius, Good Omens, True Detective 2, and Sweet Girl under her belt.

Dedra Meero, as the power of her name, is the Empire’s authoritarian Imperial Security Bureau supervisor., who is hellbent on finding Cassian Andor.

Unlike the former Star War villains like Admiral Hux and Moff Tarkin, Dedra and fellow villain Syril Karn are different in their entirety.

About the two characters, Denise Gough said that both Syril and Dedra are mid-level villains and not the top, which will eventually bring more excitement to the show. Baddies ultimately get into the shoes of determined people. As for Dedra, she is on the mission of saving the world or at least saving their empire.

It is certain that Gough is going to be known for her role as Dedra as soon as the essence of her character is revealed. Until then, Gough will remain to be remembered for her distinct roles in Too Close, Under the Banner of Heaven, Stella, and The Kid Who Would Be King.

In the beginning, we saw Syril Karn assisting the corporate authority which is partnered with the Empire with an aim to enforce order on Morlana One.

She is the adoptive mother of Cassian Andor, who is disappointed with the way her son has grown into.

Shaw is a popular actress who has recently amazed us with her incredible performance in Killing Eve as well as her roles in the Harripotter film series, My Left Foot and Baptiste.

For decades, B2EMO, the salvage droid, has been with Andor’s adoptive family. Since it is old, B2EMO is not in impressive condition, instead, it is still there with a leaked battery, malfunctioned parts, and an unusual speech pattern.

Chapman who is known as a puppeteer in the Star Wars sequel trilogy is also renowned for his characters in The Dark Crystal: Age of Resistance and Spitting Image.

Gerrera is another freedom fighter introduced in Star Wars: The Clone Wars, who made his live-action debut through Rogue One: A Star Wars Story. As his tactics seemed too violent, Gerrera was disowned by the Rebel Alliance although he had previously fought alongside heroes Ahsoka Tano and Obi-Wan Kenobi.

If you haven’t watched Whitaker before, then you are missing the legendary acting of an Academy Award winner, who won it for the movie, The Last King of Scotland. His other credits include films, Black Panther, Vietnam, Arrival, The Butler, and Good Morning.