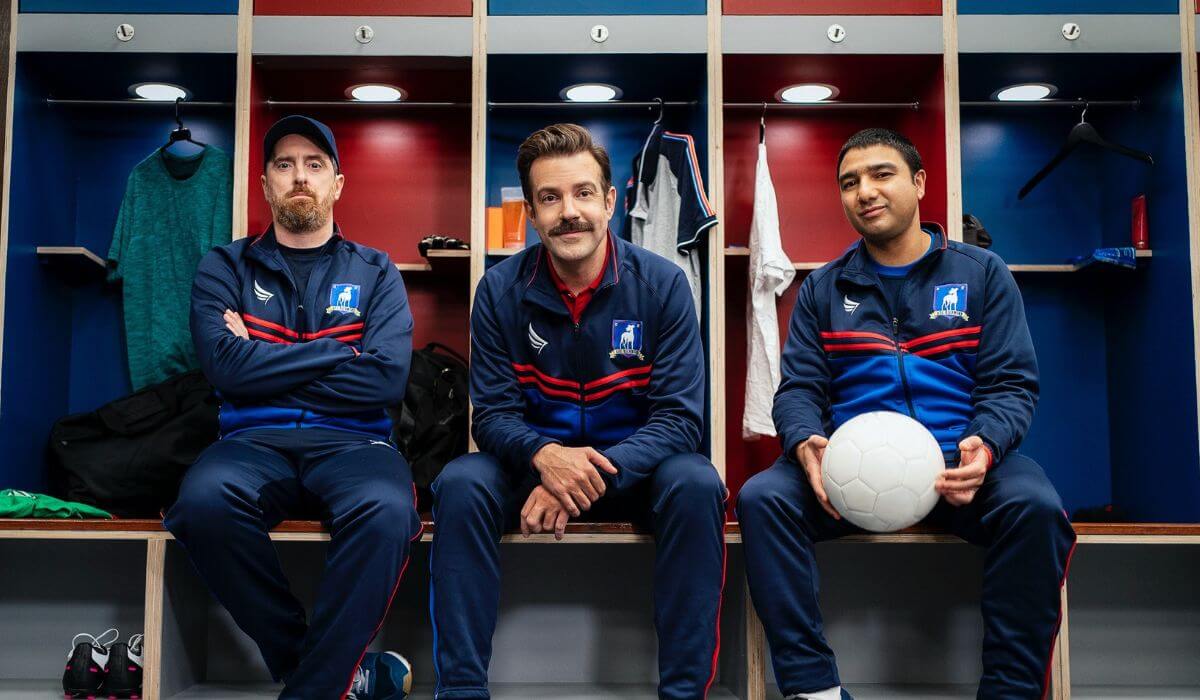 The resounding drama series Ted Lasso Season 3 would hit the release window this upcoming spring season. Although an exact date has not been announced, people are thrilled to bits to see the avidly waiting for Ted Lasso season 3 premiering on Apple Tv+. Without making any delay, let us have a comprehensive look at more interesting facts about the Ted Lasso series.

Tedd Lasso has finished filming its third season and the AppleTV+ has unveiled this piece with the happy news that the much-awaited season 3 would hit this coming spring season. It was today that the Apple TV+ decided to unfold the first look of the highly anticipated season three of Ted Lasso.

This coming spring would be a medley of visual feasts for all the fans of Tedd Lasso and definitely, its upcoming season would also become an iconic one just like its second season did. So it is time to root for our favorite characters and fingers crossed, let’s just wait for Spring to arrive.

Also Check: We’re The Millers 2: renewed or canceled? everything you need to know

Where Can We Watch Ted Lasso Season 3?

The release date of season three took unusual delay due to some sort of production delays, and script changes. But rectifying all the issues and overcoming the encumbrances, this spring would be definitely a way to laugh to death. The fans could not control their excitement to have their favorite show back with another season and actually not announcing an exact date is just sensing the finitude of their patience.

What would be Tedd Lasso Season 3 about?

As per sources, the editors of the American sports comedy-drama, AJ Catoline, and Melissa McCoy shared some shred of petite pieces of information about what to expect from season three or what is actually waiting for its viewers.

Both of them shared that Rebecca Welton, played by Hannah Waddington, and Nate Shelley played by Nick Mohammed would be in a race for best character evolution in the upcoming season.

Catoline said: “it’s hard. Jason Sudeikis is so very generous as a producer and creator. He gives all of the characters a storyline. I think that’s why the episodes are so full. He wants every character to have an arc”.

As the editors of Ted Lasso said, the most important character Rebecca would have to overcome two challenges that would really have a toll on both her personal and professional life.

This uncanny predicament of Rebecca would lead us to Nate, who has surprisingly turned into the show’s formidable villain. As season two concluded, it was Nate who tear down Lasso’s Believe signs and set across to be the head coach of West Ham.

People would hate him for what he does even though they love him at the same time, it is his quality in acting that makes his viewers hate him for his character portrayal and he is doing the best job on screen.

Even in one of the recent interviews, Nick Mohammed said about his character’s transition from underdog to terrific antagonist. He added how much he enjoys being a villain in the upcoming season three, and how lucky is to get a chance to relish different shades of character on the same screen.

Nick added: “it was fun, in a sense that, as an actor, you relish an opportunity to try something different. It was certainly challenging in that if I had a comfortable area, it was in doing the slightly bumbling, awkward Nate. And then to find myself be the villain of the piece, I guess second to Rupert, who is the ultimate villain. It’s a fun place to start season three from, that’s for sure”.

So season three would take its audiences to more than their anticipation and definitely it would be as enrapturing as its previous seasons.

Who Will Be In The Cast?

It is indeed a piece of good news, that all the favorite characters of Ted Lasso would likely return in the upcoming third season. Roy Kent played by Goldstein, Coach Bear, by Brendan Hunt, Higgins by Jeremy Swift, Jamie Tartt by Dunster, and Keeley Jones by Juno temple, would definitely appear in the upcoming third season of Ted Lasso that would hit the home screens on this Spring.

Most importantly viewers are avidly waiting for Jason Sudeikis who plays Ted Lasso in the show. Furthermore, the viewers would be introduced to two new characters: Girls’ Becky Ann Baker who will pull off the role of Ted’s mom, and Jodi Balfour, who will play a venture capitalist in the show.

Is Ted Lasso Available On Netflix?

Emily Ratajkowski is one of the astoundingly hottest American Model actresses and an amazing author. This charming beauty was born on June 7, 1991, in London, UK. Are Emily And Sebastian Bear Still Together? Her acting career began when she was...