Joey Defrancesco, the munificent Jazz Organist, saxophonist, and trumpeter of America died on...
HomeEntertainmentHouse Of The... 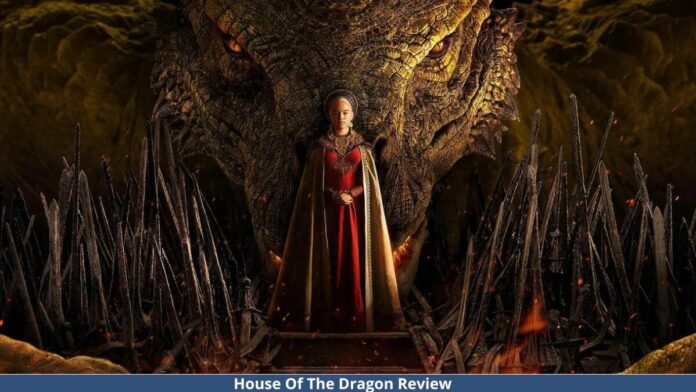 The most awaited sequel of Game of Thrones, ‘House of the Dragon’ has kicked off with an astounding effect by exploring tragedy as the quintessential. The plot for the first episode itself is mind-numbing where the new characters revealed their resounding acting skills.

The plot revolves around Rhaenyra Targaryen ( Milly Alcock) becoming the successor of the Iron throne after her father, which made a devastating impact on the King’s landing. The Targaryen at the start of abundant power, Viserys I Targaryen ( Paddy Considine) became the King of seven kingdoms after being named King Jaehaerys 1st successor. In order to thwart a war, Jaehaerys had to announce his next successor because he was pretty aware that the fall of the house of Targaryens is in his hands of themselves.

The story commenced 172 years before the death of King Aerys and the birth of Daenerys Targaryen. Rhaenyra, an appealing stringent princess of Viserys, always found happiness in dragon riding and exploring the world. Her mother queen Aemma was expecting a baby and King Viserys longed for a son so that he could be the heir to the iron throne. Viserys talks highly of his unborn child, despite Rhaenyra being the firstborn child. She believed that she would be completely degraded and disregarded after her brother’s arrival into the world. Rhaenyra confided in Alicent who was her confidante. Alicent knows that the princess is distraught over her father’s raving about having a son.

Rhaenyra finds her uncle Daemon Targaryen ( Matt Smith) sitting on the irone by not presenting at the small council. Daemon, the king’s commander of the city watch was a rapacious man who has hidden strong feelings for power and to grab the iron throne. He orders the knights to enact his laws which commiserate beatings, amputation, and decapitations.

These unscrupulous deeds of Daemon caused uneasiness in the council and Otto Hightower, the hand of the king stresses to King that Daemon’s action cannot be appreciated and if they delay taking any actions, it would lead the iron throne into deep contrition.

Thus the king was forced to take an imperative action. Otto and Daemon never concurred to anything; they always shared a rivalry between them. By any means, Otto decided to thwart Daemon from his heinous actions, and finally, the hand of the king Otto brought Daemon’s wife to the king’s landing. She was leading a forlorn life in the vale. Daemon calls his own wife a “Bronze B*tch”. As we all know, Game of Thrones was immersed in misogynistic attitudes and this sequel too explores that attitude they considered women as ‘demeaning objects’.

King Viserys always harboured love for his brother and Daemon always took advantage of it and he was left scot free for all his hideous deeds. Albeit having a wife, Daemon had an affair with Mysaria.

When things turned pretty bad for the king, he lost his wife and son which brought a cataclysmic hole in the Iron throne. Women were always at the hands of vultures and they were always deprived of their rights because of their gender. Here in the house of Targaryens Rhaenyra was facing the fate of all women in that era because of being a girl. “ Rhaenyra is a woman” this sentence shows the stark portrayal of the anti-feministic attitude of the men.

The council held a meeting and many opinions arose about making Daemon the next true heir to the Iron Throne. The person who caused ‘destabilisation of the realm’ is not supposed to be the true king. King Viserys was a stickler for the welfare of his pupils and he cannot allow his own blood brother to be the next king, by knowing all his deeds that caused misfortunes to the realm.

To everyone’s surprise, King Viserys decided to give the power and the Iron Throne to his daughter. This deed infuriated Daemon and he strictly opposed it and even addressed the king as ‘ weak and fragile’. His unabashedness to grab the power made him the devil and he flees from the king’s landing on his dragon back. Viserys says to his daughter that “ the Iron Throne is the most dangerous seat in the Realm”.

And now his daughter has inherited all of their enemies into their lives, with none of their defences by ascending the throne. He tells her “ The Song of Ice and Fire’ a top little secret that has been passed from king to heir since king Aegon’s time.

This series House Of The Dragon would cause nail-biting moments to the fans who were eagerly waiting for the Game of Thrones sequel. Violence, wars, insatiable hunger for power, killings, and rivalry between blood relationships are the themes around where House of Dragon revolves. The other following episodes will portray the malicious deeds of Daemon Targaryen who could bring peril to the Iron Throne.