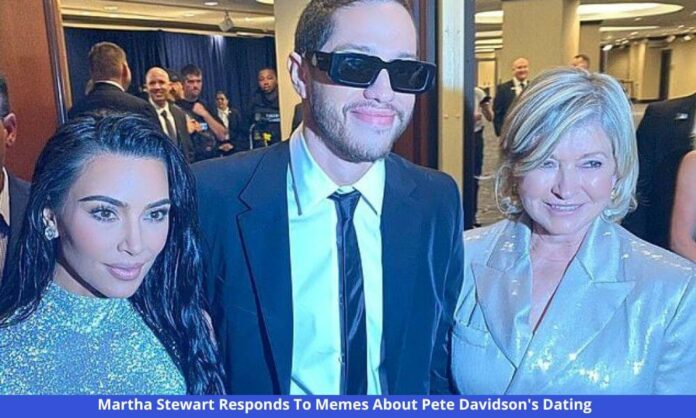 On Friday, the established merchant Martha Stewart stepped up to react to the trending news of the alleged split of the model mogul Kim Kardashian and her ex-boyfriend Pete Davidson. To the viral meme, Martha, 81 replied saying that she could be the Saturday Night Life star’s, next love.

The meme shipping Pete and Martha Stewart started gracing social media throughout the week which led the businesswoman to finally react by looking at the possibility that she could actually date Pete.

On August 12, Friday, Martha Stewart was asked about her take on the storming trend on the occasion of her brand new restaurant, The “Bedford”s promotion. She initially giggled when the question was raised to confirm whether Martha was about to be Pate’s upcoming lady friend.

Quenching the curiosity of the fans, Martha Stewart revealed that Pete,28, was a son she never had and that the young man was finding his way. Although the 53 years of age gap cannot be unseen, the gushed pair have considered hanging out in their past.

Reportedly the two were spotted together back in 2015, at the event of Justin Beiber’s roast and even the couple were clicked holding hands at the dinner party arranged by the White House Correspondents in Washington DC  on the same night when Kim K and Pete made their red carpet debut. The invite to the dinner was only for Kim considering the premiere of Hulu’s The Kardashians, to which Pete also attended along with his then-girlfriend.

In the hinted photograph, Kim was alongside Pete, which is not the case now as the couple has called quits on their romance a few weeks ago.

However, Pete and Martha Stewart would be seen in the same frame as Martha has already sent an invitation to Pete to guest on her podcast. Martha Stewart herself has shared that she would be longing for the moment to hear from him.

Must Read: Is Steve Martin Retiring From His Acting Career?

The romantic curiosity of the rumored duo will reportedly enter its advance as the lifestyle guru’s initial reaction was a hearty chuckle which itself indicates much more than what she actually said. Social media has been buzzing about the duo and trolling Kim Kardashian time and again.

It was never expected of Kim and Pete to wound up just after 9 months of their relationship which seemed like a Hollywood fairytale for anyone looking at them. The bond carried by the pair was incredibly magnetic which has been making the fans uncomfortable in digesting the fact that the two would not be seeing each other anymore. The breaking news of Kim’s split has left her buffs speechless and wondering.

The chemistry possessed by the couple was nothing to be looked down upon as it was truly impressive. Moreover, an insider stated that the pair was about to have a wonderful intimate time together in Australia, right before the baron booked her flight. However, it does not seem like they were really enjoying their privacy, in fact, it does seem like the couple might have had some heated argument relating to their future.

The official source then clarified the bafflement when they stated that Kim and Pete Davidson had a deep conversation about themselves and their coming days as a couple, which ultimately led them to break their months-long connection.

The source also spilled that the pair have ended things beautifully and not in a rush and thus there was still some sort of attraction between the couple. But still, Kim was firm and clear that she and her former boyfriend, Pete, have got nothing to do anymore.

It was also obvious to the fans that things would not be so good as the couple was bicoastal, with Pete in Australia and Kim in California. It ended up as the comedian was concentrating and committing to more of the projects including the movie Wizards!, which was being shot in Australia.

About their long-distance relationship, another insider happened to share that the space did nothing good but tangled up the things within the couple by putting extra strain on Kim. Pete initially expressed his desire for Kim to stay along with him in Australia which was barely possible for the model as she was not in a position to do so.

Since Pete had only begun his career it was not like he would be freed from the hustle and return forever to Kim, which eventually made them realize that the relationship was not about to work.