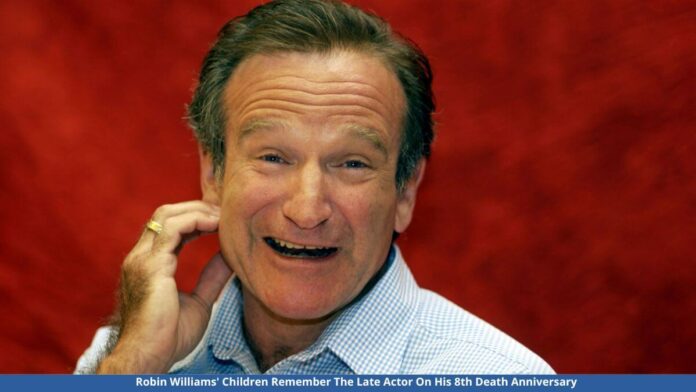 In remembrance of their lovely Dad, the late Robin Williams, Zach Williams, and Zelda Williams paid a tribute on the occasion of Robin Williams’ eighth death anniversary.

In the commemoration, Zelda, 33, showcased suicide awareness, since Robin William died in 2014 after committing suicide. To display the importance, Zelda backed her words with the support of the Japanese writer, Haruku Murakami’s quote that went well with her thought.

Stressing the importance of life, the lines of Murakami implied that when someone crosses the hurdles and finally makes it through, then the person would not even remember what the difficulty was as he would be baffled thinking about what he actually did to survive by looking at the evolved self.

“I deeply miss you you wonderful, hairy man and will be celebrating your life today. Love you so so much!”

Those words were enough to pass the desired message. However, Zelda went on to couple the brief note with information about a slew of resources that would ultimately aim in preventing suicidal thoughts.

Since she was overly concerned, Zelda welcomed the attention of the readers to mention anyone who would be in need of the exact sayings and details regarding the deadly ideas and beliefs. Zelda spilled her heart out by stating that she would only ask for the readers to be kind and gentle to themselves at least for the day.

Meanwhile, Zak took an old picture of Robin William who was unusually bearded and was posing by looking afar. Unlike Zelda, Zak made use of the day to appreciate and display his dismay in missing his dad and he noted how incredible of a person Robin was and his joyful gestures on the eighth anniversary of his passing.

Hinting at Robin William’s beard, Zak tweeted that he incredibly misses the “hairy man” and concluded the brief dedication by stating his love for the departed soul.

The homage seemed quite emotional for the fans as a mob was seen under the tweet who shared their shoulders for Zaka and Zelda to lay upon.

Zak and Zelda are not straight siblings for the Dead Poet Society star had Zak with his foremost wife Valerie Velardi and Zelda with Marsha Garces, Robin Williams’ second wife.

The legendary actor, who used to adapt to the character in the spur of a time, surrendered himself to death and was diagnosed with Parkinson’s disease at the time. But after the autopsy, the reports mentioned Lewy body disease, which is a rare form of dementia that affects the logical thinking and reasoning of the affected.

Both kids of Robin Williams were spotted doing the same last year, on the occasion of the Oscar-winning star’s seventh anniversary of his death, where Zak shared a similar note, picking up each tiny memory he had with his Dad, and Zelda spreading awareness and educating people on self-importance and self-destruction.

Since the early demise of his father, Zak chose the path of a mental health advocate and also was seen sharing his personal experiences in overcoming the long process of grief.

On Apple TV’s The Me You Can’t See, Zak opened up about his difficulty in sharing his despair with the general public as he found it quite hard to differentiate between grieving alone and sharing the same with the American crowd as well as the whole world. He ripped open his thoughts with Oprah Winfrey and Prince Harry while the trio was sharing the stage for the 2021 interview.

Zak said that he was totally blinded by the mob as he could not save time to grieve privately for the loss of his dad until almost a year and a half passed after the departure of Robin William.

Zak stated that he was happy to regain and gather himself together to set boundaries wherever that was necessary. Thus, Zac harnessed the opportunity to exhibit his gratitude and appreciation.

As for Zelda, she was also in the scene when the American stand-up comedian Bob Saget, who is better known for portraying the role of Danny Tanner in Full House, died on January 9, 2022, followed by unacceptable head trauma.

To the sudden death, the optimistic Zelda came up with a message that asked for privacy and respect for the mourning and sorrow of his family and friends while expressing heart-pouring love for Sagt who had already left for the heavenly residence.

At the behest of the dear and near ones, Zelda requested the Saget fans to prevent themselves from burdening them in their socials. She also utilized the time to share that invading and breaking the safety of the insiders would do no good as everybody was merely human.