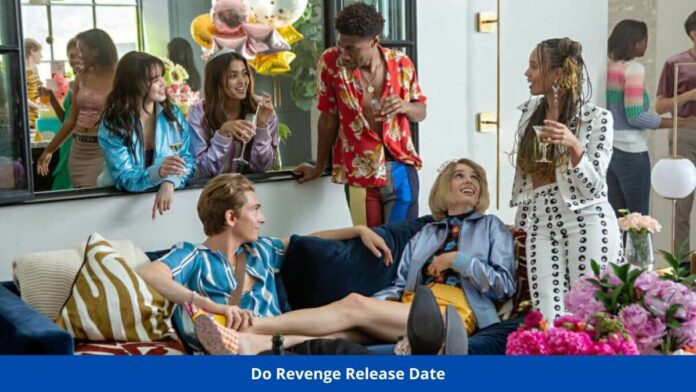 Do Revenge movie seems to feature an all-star cast of young famous actors. Do Revenge will be released on 16 September 2022. If you’ve ever wondered about what your next step should be after someone does you wrong, then the Netflix upcoming ‘Do Revenge’ has an answer to that.

This dark comedy has Maya Hawke (best known for Stranger Things) And Camila Mendes (best known for Riverdale) as leads and scariest protagonists of all time: teenage girls!

Do Revenge movie Director and writer Jennifer Kaytin Robinson, after finishing her last film in 2019, was looking for her next project and she was struck with the idea of a high school movie.

As she is a fan of John Hughes classics and 90s hits like 10 Things About You, Cruel Intentions, and Jawbreaker. Then she discussed the idea with her Producer Peter Cron and they started thinking about a twist and landed on the idea of making it Hitchcockian.

Does Do Revenge Tell About The Story Of Secret Friendship?

This dark comedy follows the story of two teenage girls who were unlikely to be friends, but as both of them faced bullying in high school, they finally team up to take revenge on their respective tormentors.

Director Jennifer Kaytin Robinson told in an interview that “there are different points in the film where everyone seems a villain and everyone seems a hero. And that is what growing up actually is. I wanted to be able to make something that’ll paint all the colors of adolescence.”

Camilla Mendes will be portraying the role of Drea who wants to get back at her boyfriend for leaking her sex tape. And Maya Hawke will be seen in the role of a transfer student Eleanor who became a subject of ridicule due to a rumor that she tried to hold down a girl and kiss her.

She comes to this new school and finds out that her old school bully goes to the same high school. Now both of them come together and form a plan to execute their vengeance.

The film is confirmed to release on September 16th, 2022 on Netflix.

The cast became a highlight of the film even before the trailer was released which seems to be full of actors from top shows like stranger things, Riverdale, Euphoria, and many more.

Director Robinson and co-writer Celeste Ballard have assembled a cast from what seems the hottest teen shows. Although they didn’t have any specific actors for the lead roles. Robinson told in an interview that signing up Camila for the role of Drea was a no-brainer.

Within the first 5 seconds of her audition tape, I knew this was Drea and I called up producer Peter Cron immediately. When it came to Hawke, it was the same thing. Robinson had a zoom call with her. But as she was scheduled to shoot for stranger things season 4 at that time, signing her up for Do Revenge was a conflict.

But as Robinson was still sold on Hawke, she decided to move the original shooting location from Los Angeles to Atlanta so that Hawke could work on both projects. Robinson said, “moving the production was a perfect idea because if we would’ve waited for Hawke, we would’ve lost Cami. And if we had stayed in LA, we wouldn’t have Hawke for the film.” Then for the film to be set in Miami, she re-wrote the script with Celeste Ballard (co-writer).

The production for the film has been handled by the production house Likely Story, with the CEO and executive producer of this film Anthony Bregman. The budget of the film is reported to be $10 million.

Leading the cast is Camila Mendes as Drea and Maya Hawke as Eleanor. While Mendes is known for her role as Veronica Lodge in Riverdale, Hawke is known for her portrayal in Netflix’s Stranger Things seasons 3 & 4. Game Of Thrones’ Sophie turner will also be joining the cast.

The cast has so many young actors aka ‘teen royalty’ of Hollywood, hence the nickname. Robinson said that they’re all really talented and were the best choice for the parts they played in the film. She also shared that the cast gave themselves a nickname, “they are calling themselves the revengers.”

Camila Mendes has starred as veronica in every season of Riverdale since the show aired in 2017. She has also starred in two Netflix films, Dangerous Lies and The Perfect Date. Hawke’s recently appeared in Mainstream, and a music video, her single- Therese.

Co-writer and director by Jennifer Kaylin Robinson earlier worked on projects like- Someone Great, Thor: Love and Thunder.

The Talk On Social Media About Do Revenge

Netflix’s official page blew up after the announcement of a release date for Do Revenge. The team posted a string of pictures showcasing some scenes and the main cast of the film. The post got almost 1.2 million likes and hundreds of comments. People seem to be very excited by the young popular actors and that too in a single movie. As we all know teen movies do get a lot of popularity.

Netflix shared the trailer on Twitter too which got more than 3000 retweets and 552k views, which is definitely going to increase by the way. Through the comment section, it can be concluded that people are really excited and looking forward to watching Hawke and Mendes together on a screen.

What To Expect From Do Revenge?

Robinson told ELLE in July 2022 that they backward-engineered this story of revenge. They wanted to combine the fun and thriller stakes of Hitchcockian movies with a high school theme.

Along with the trailer, Netflix also released the official poster for the film. Maya, Camila, and the rest of the star-studded cast can be seen over a pastel background which is very different from the movie’s dark-themed plot.

It is safe to say that this film may just be the Gen Z movie of the decade.

The girls team up to deal with each other’s tormentors, as can be seen from the poster with the subtext- “I’ll do yours if you do mine”.

For a short clip, like the teaser, we can see a lot of revenge going on. In the beginning, there are shots of Drea, showcasing her friends and boyfriend with the voiceover, “I spent 17 years meticulously curating a perfect life, I had the perfect friends and a perfect boyfriend.” Later on, there are a series of shots of Austin walking through the halls of their high school, having the voice-over of Camila yelling and calling him out as “a fake woke, misogynist hypocrite.” In the teaser, there are glimpses of a chunk of cut hair, a schoolyard brawl, and a paint fight which could be a part of the revenge and Eleanor’s makeover.

In an attempt to target the girl who started the rumor about Eleanor, she answers to Drea that she doesn’t just want to get even, but wants to burn her to the ground.