The much-awaited volume 2 of Stranger Things Season 4 is releasing today on...
HomeEntertainmentYellowstone Season 5...

Yellowstone Season 5 Release Date 2022, Cast, Where To Watch, And Much More 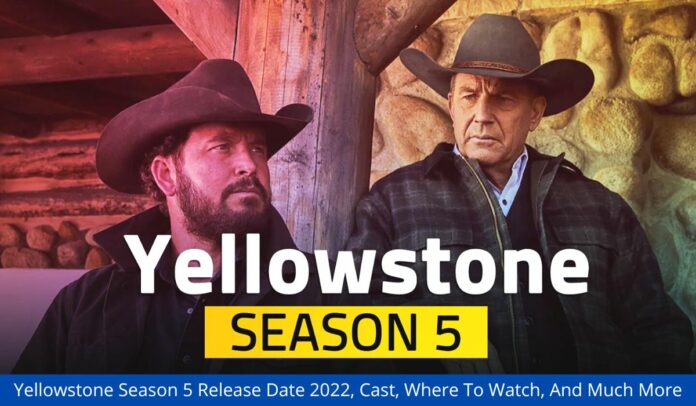 Who needs another original written series when Yellowstone is the only one now airing on the Paramount Network?

The program has been a rating powerhouse; in 2021, it ranked as the top series across broadcast, cable, and premium, with an astounding 11 million viewers turning in on average each week.

Not surprisingly, the show has been formally renewed by Paramount Network for a fifth season, with guest performers Jen Landon (Teeter) and Kathryn Kelly (Emily) being promoted to series regulars.

When will the fifth season launch? The potential season finale of Yellowstone will launch on Sunday, November 13, before Tulsa King’s season premiere, which Paramount Network finally revealed on May 18.

Since everything appears to be pointing toward the ideal storm, there is a good likelihood that Yellowstone season 5 might be the last. Sheridan is also working on other shows in addition to Yellowstone, which also points to season 5 being the finale.

There will be two blocks of seven episodes each in Season 5, for a total of 14 episodes. Although it’s the longest season to date, it’s not yet known how long the intermission will be.

Where Can You Watch Yellowstone Season 5?

You probably know about “Yellowstone,” which over the course of its four seasons has become an unexpected television hit (and counting). Because of how well-liked it is, a flashy prequel series has already been produced, with both of the show’s creators sharing Taylor Sheridan.

However, it can be difficult to locate a place to see “Yellowstone,” which stars Kevin Costner as the head of a wealthy ranch family in Montana. In response, we are here. New seasons of the Paramount Network original television program “Yellowstone ” is broadcasted there. Peacock is also streaming “Yellowstone.”

Only the first season is accessible on Peacock’s free edition, whereas the first four seasons are now streaming on Peacock Premium.

On March 28, 2022, “Yellowstone” Season 4 began streaming on Peacock. Unexpectedly, “Yellowstone ” cannot be streamed on Paramount+ because Peacock was granted exclusive streaming rights to the series in 2020.

The cast of Yellowstone season 5 is filled with stars. This is partly the reason for the series’ becoming the hot topic that it is.

The contemporary Western, which debuted in 2018 as a sort of kickoff for the network’s rebranding (it was formerly Spike TV), unmistakably touched a nerve with viewers. The Montana-based drama series centers on the struggles of the Dutton family, owners of the biggest continuous cow ranch in the United States.

In Taylor Sheridan’s Yellowstone, Kevin Costner plays patriarch John Dutton, a man fighting to keep the family ranch intact as they battle land developers, an Indian reservation nearby, and other adversaries in an effort to preserve their history.

When can we anticipate the first teaser now that we are aware of everything? Can we currently make an educated guess? The apparent first point to make is that the aforementioned trailer will be released soon.

We generally believe that we won’t have to wait more than a few weeks to see any significant footage because filming started in May. Is there a reasonable timeline to estimate after that? We could easily imagine something debuting in September or, at the very least, early October given that it helps a channel like Paramount (with no significant hits) to start the show’s promotion early. There will likely be a tonne of film in the can by then.

It would probably just include bits and pieces from the first few episodes and may show John Dutton in the thick of his campaign to succeed Steve Bullock as governor of Montana.

Even though he may not really want the position, he has no other options. Because of this, we start to wonder if there will be a scene where another character steps up to the challenge on his behalf. Be ready for countless trailers, or at the very least, numerous previews. The network has a strong incentive to spread the word about this.

The Yellowstone Dutton Ranch, sometimes known as “the Yellowstone,” is the largest ranch in Montana and is owned by the Dutton family, who are the subject of the television show.

Family strife at the ranch and the nearby Broken Rock Indian Reservation, national park, and developers are central to the story. The Dutton Family, which owns Yellowstone Ranch, the biggest ranch in Montana, is followed by Yellowstone.

John Dutton (Kevin Costner), the father of the family and the sixth generation Dutton to hold the ranch, guides his family through challenging times involving builders, the national park, the adjacent Broken Rock Indian Reserve, and also disputes within the family.

The drama series has plenty of melodrama, sinister secrets, murder, and other scandalous happenings, giving it the impression of Dallas’ entertaining 21st-century successor.

What To Expect From Yellowstone Season 5?

Yellowstone Season 5, has got a lot of hype around it. And with trailers expected in September, the hype is just going upwards.

The series is expected to end after this season but spinoffs are expected as well. But will the series stand up to the hype? We’ll know soon!