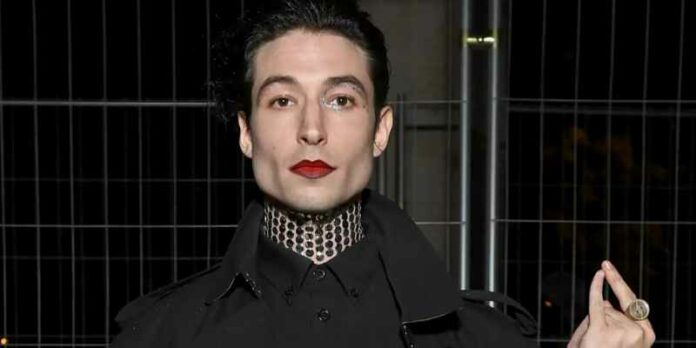 A new accusation is brought against Ezra Miller for giving drugs to a minor. Controversies happen to be an integral part of Miller. This time, however, things are quite serious as Miller’s name is now connected with grooming an activist.

A couple recently filed a case against this actor for giving their 18-year-old girl drugs and alcohol.  Sara Jumping Eagle and Chase Iron Eyes even submitted all the necessary documents to the police while complaining about Ezra. Furthermore, there are allegations of physical abuse also. Thus, it does not seem that the case will resolve very soon. Already the police are investigating the matter as it involves the life of a minor who is a present activist.

Ezra Miller Accused Of Grooming An 18-Year-Old Activist: Complaint Of The Parents

In one of the posts of Sara Eagle on Instagram, she stated that her family has been suffering a nightmare at present. Moreover, she even tagged it to Ezra Miller, accusing him of this unwanted phenomenon. It is the question of the welfare and safety of their daughter.

Tokata Iron Eyes, the daughter of Sara and Chase, is now 18. However, the parents have recently detected that their girl is completely addicted to alcohol and drugs. Moreover, it is not an incident of one night.

They also found out that Miller has been giving her drugs since the time she was just 12. When the public refused to hear such complaints against a famous personality, they showed all the evidence and filed a suit against Ezra.

The involvement of Ezra Miller in such cases is not a new thing. Hence, it will not be impossible for the artist this time to come out of the scandal clean. According to the victim’s parents, Miller met Tokata in 2016 and showed an interest in the girl of 12. At that time, he was 23 years old. A Standing Rock Reservation Protests took place at the same time in North Dakota.

The brainwashing started from those early years only and is still continuing. The emotional abuse has already ruined the teenage years of their child. Hence, it is high time that Ezra Miller must get the punishment that he deserves for grooming their daughter.

Corruption Of The Minor

The corruption of the minor girl began with the regular consumption of different drugs like Marijuana and others. However, the parents were unaware of all these incidents. Surprisingly, they even discovered that Miller paid Tokata’s college fees too. This was something unacceptable for the respected people like the Iron Eyes.

Recent reports say that Ezra Miller’s arrest occurred in Hawaii. Shockingly, Tokata also traveled to that place as well as Los Angeles. Of course, this behavior of the girl was completely manipulative. Psychological control is definitely not acceptable to any parent. Hence, they finally raised their voices against misdeeds of Miller.

Last December, the family decided to pay a visit to Ezra’s home after Tokata dropped out of school. However, the cards, keys or driver’s licenses, etc. all went missing at that time. Unfortunately, the 18-year-old gave a completely opposite statement on her Instagram account. She refused all the allegations made by her parents and wrote that due to the death of one of her close friends, she was grief-stricken. During that crucial period, she got the full support of her mentor Ezra Miller.

Hence, it is wrong to accuse such a person of ruining her life. The story is totally opposite and she is grateful to this comrade. Furthermore, she also added that Miller always provided protection and gave her the shoulders on those sad days.

After the release of the statement by Tokata online, their parents denied the fact and revealed that their daughter did not own any phone from January 2022. Sara Jumping Eagle took to Instagram only to clear out this fact and showed her concern knowing the whereabouts of her daughter. Furthermore, in the recent past, she also wrote that Miller is the controller and operator behind his Instagram page of Tokata. Hence, it is clear that the post has been made by Ezra or someone else, but definitely not Tokata herself.

In every post, the worried mom has tagged Warner Bros also. So, the real thing is still left to be revealed. Such news against Ezra Miller already left a chaotic impact on Hollywood and many people connected with the actor. It is after all a terrible accusation that needs an immediate solution. Of course, the laws of America are very strong to handle these situations.

But when it involves a top-grade personality like Miller, things get tougher. Psychological harassment and repeated manipulation of a little girl is never a thing that society will support. Moreover, even if the concerned girl is 18 now, she has been provoked to get the drugs from childhood. However, the final result is still waiting to be proved. It depends on what the investigation will say at the end. Police are still looking for Tokata and Miller.