Gautam Adani Net Worth 2022: Is Gautam Adani the Richest Person in Asia Amidst debt of Rs 12,770 crore From SBI? 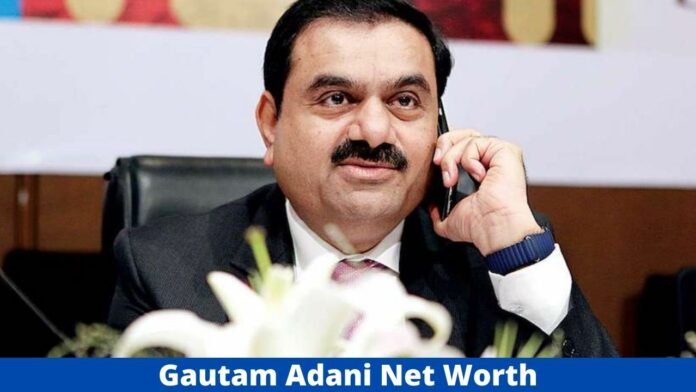 Gautam Shantilal Adani (born June 24, 1962) is an Indian industrialist and philanthropist worth billions of dollars.  He is the chairman and founder of the Adani Group, a multinational company headquartered in Ahmedabad that specializes in port development and operations in India. Adani also serves as the president of the Adani Foundation, which is run by his wife, Priti Adani.

According to Forbes, he is the richest man in Asia and India as of March 29th, 2022, surpassing Mukesh Ambani’s net worth of US$100.0 billion (Rs.7,60,000 crores +).  At the same time, Gautam Adani’s net worth increased by $49 billion last year, surpassing that of Elon Musk and Jeff Bezos.

As of March 7, 2022, he is ranked 9th on Forbes’ real-time billionaire’s list. In 1988, he formed the Adani Group, which has since expanded into areas like resources, logistics, energy, agriculture, defense, and aerospace, among others. Adani Ports & SEZ has a 74% share, Adani Enterprises has a 75% stake, and Adani Power has a 74% stake.

According to Forbes’ Real-Time Billionaires List, the combined net worth of India’s two richest men, Mukesh Ambani and Gautam Adani have surpassed $100 billion. However, both Ambani and Adani maintain the same global ranking.

“In the M3M Hurun Global List 2022, Gautam Adani, 59, is the largest gainer, having added USD 49 billion to his wealth last year,” M3M Hurun Global Rich List stated in a statement. “More than the top three worldwide billionaires, such as Elon Musk, Jeff Bezos, and Bernard Arnault,” according to his net worth increase.

His fortune soared roughly fivefold to $81 billion after the renewable energy business Adani Green was listed, up from $17 billion in 2020.

Adani was born on June 24, 1962, in Ahmedabad, Gujarat, to Jain parents Shantilal and Shanti Adani. He has seven siblings, and his parents emigrated from Tharad in Gujarat’s northwestern region. His father worked for a modest textile company. He attended Ahmedabad’s Sheth Chimanlal Nagindas Vidyalaya school. He studied at Gujarat University for a bachelor’s degree in commerce but dropped out after the second year. Adani was interested in business, but not in his father’s textile company.

Adani traveled to Mumbai as a youngster in 1978 to work as a diamond sorter for Mahendra Brothers.

Mahasukhbhai Adani, his elder brother, bought a plastics factory in Ahmedabad in 1981 and asked him to run it. Adani’s entrance to worldwide trading through polyvinyl chloride (PVC) imports turned out to be this enterprise.

He began importing raw polymers for small-scale companies in 1985. Adani launched Adani Exports in 1988, which is now known as Adani Enterprises, the Adani Group’s parent business. The corporation used to deal in agricultural and power goods.

In 1991, his company benefited from economic liberalization measures, and he began growing his business in the metals, textiles, and agricultural products trade.

The Gujarat government announced managerial outsourcing of the Mundra Port in 1994, and Adani was awarded the contract in 1995.

He built the first jetty in 1995. Mundra Port & Special Economic Zone used to run the operation, however, it was handed over to Adani Ports & SEZ (APSEZ). The firm is now the largest private multi-port operator in the world. Mundra Port is India’s largest private-sector port, capable of processing almost 210 million tonnes of cargo each year.

Adani entered the power generation business in 2006. He bought Abbot Point Port in Australia and the Carmichael coal mine in Queensland between 2009 and 2012.

A protester holding a sign opposing the Carmichael coal mine owned by Adani Group.
Adani won the world’s largest solar bid, worth US$6 billion, from the Solar Energy Corporation of India (SECI) in May 2020. Adani Green will take on the 8000MW photovoltaic power plant project, while Adani Solar will add 2000MW of solar cell and module production capacity.

He surpassed Mukesh Ambani as Asia’s richest person in February 2022.

In 1998, he was kidnapped and held for ransom, but he was freed without receiving the money.

During the 2008 Mumbai attacks, he was staying at the Taj Hotel.

Adani is the founder and president of the Adani Foundation, which is supported by the Adani Group. It was established in 1996. The Foundation also works in Maharashtra, Rajasthan, Himachal Pradesh, Madhya Pradesh, Chhattisgarh, and Odisha, in addition to Gujarat.

To combat the Coronavirus outbreak, he donated 100 crores (US$13 million) to the PM Cares Fund through his group’s charitable arm in March 2020.

Is Gautam Adani the Richest Person in Asia Amidst debt of Rs 12,770 crore From SBI?

The Adani Group, led by Gautam Adani, has persuaded the country’s largest lender, the State Bank of India, to underwrite its total debt of Rs 12,770 crores, allowing the greenfield airport in Navi Mumbai to be financially closed. SBI has chosen underwriters for an institutional share offering that is expected to bring in at least $1 billion. SBI chose Bank of America Corporation, CLSA Ltd., and HSBC Holdings Plc as its top three options. SBI Capital Markets Ltd. and Kotak Mahindra Bank Ltd. were also chosen to work on the acquisition.

Mr. Adani owns a palatial bungalow in Gurgaon, India, located on the Sarkhej – Gandhinagar Highway, Plot No. 83, Sector 32. Aside from that, he has a large number of real estate holdings around the world.

As one might guess, Mr. Adani’s car collection is extremely extensive. He owns premium vehicles such as BMWs, Mercedes, Ferraris, limousines, and other limousines.