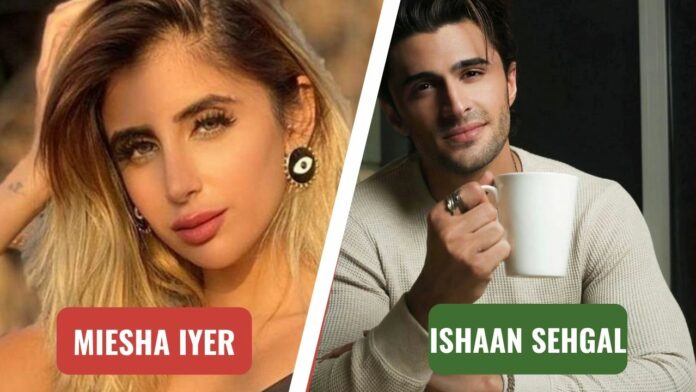 Within a week, Cupid has visited the Bigg Boss house, making it one of the fastest love stories ever.

Miesha and Ishan are getting closer to one another every day. In yesterday’s episode, Ishan and Miesha embraced intimately, as well as shared a passionate kiss, which was not shown on TV but seen by the live audience.

Miesha explained to all of the contestants in the first season about her relationship with Pratik and how he used to be aggressive with her, his sister dismissed it, and she clarified that they weren’t in a relationship.

During the live feed, Ishaan and Miesha are not communicating with one another due to a minor misunderstanding.

In the following episode, Ishaan is suspicious that Miesha informed Pratik about the maps and their locations.

He tells her that he is uncomfortable with the fact that she discusses everything to Pratik, especially because she had a problem with him in the past.

Meisha responds that there was nothing in the past and only excellent friends, but she tells him she’s glad they met again. She also has a solid friendship with him now.

What we should emphasize is that she claims to have been in a relationship with Pratik at various times, yet she says they were simply good friends at other moments. Is she employing both Ishaan and Pratik for her game?

It appears that Ishaan has fallen for her. If everything goes well, he said he would want to marry her.

To many of the house, Ishaan and Miesha’s romance remains a mystery. Some netizens even believe that they are just faking it for the show.

This conflict will be fascinating to watch as Ishaan and Miesha attempt to move their relationship ahead.

What are your thoughts on Ishaan and Miesha’s romance? Are they really in love or are they faking it?

Please let us know in the comments below if you’d like to see it.

Bigg Boss 15: Who is Miesha Iyer? Her Relationship Explained in BB15!