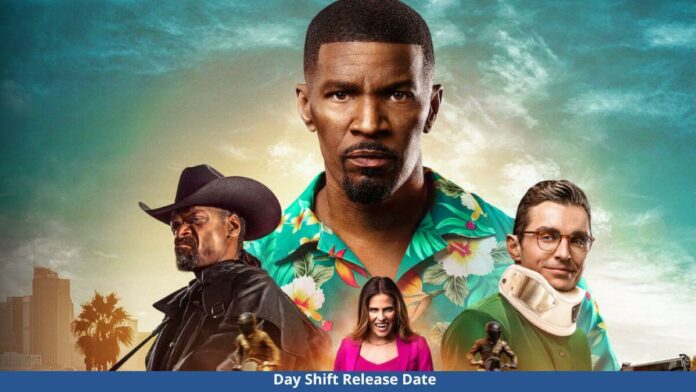 Day Shift was released on 12th August 2022. The movie is being considered an action film, but will definitely have comedic elements to it as shown in the trailer and given that the main lead is Jamie Fox.

In the Day Shift trailer, there seems to be some sort of union of skilled vampire hunters who have come together to hunt and kill vampires.

Foxx gets paid for his “services” once he delivers the vampire’s fangs. Jamie Foxx is starring in this comedy-action film as a hard-working father who just wants to provide a good life for his 8-year-old quick-witted daughter.

He works for a San Fernando Valley pool cleaning job which is a cover for his real job, which is to hunt and kill vampires; which is a part of an international union of vampire hunters.

This movie is directed by J.J.Perry who is making a directorial debut with this film. He has previously worked as a 2nd unit director and stunt coordinator on movies such as Fast and Furious 9, Bloodshot, The fate of the Furious, and John Wick chapters.

Once you’ll get to know who is in the cast, you’ll be way more interested in watching the movie.

Daily Shift was released on August 12 in theaters, after which it is available on the streaming platform Netflix.

The main lead Jamie Foxx is now becoming a regular performer on Netflix, having previously acted in films such as Dad Stop Embarrassing Me, Project Power, The Amazing Spider-Man 2, Spider-Man No Way Home, etc., in addition to the upcoming science fiction comedy film They Cloned Tyrone. The first draft of the script was written by Tyler Tice, and some changes were made by screenwriter Shay Hatten (who also worked in Zack Snyder’s Army of the Dead, and the John Wick movies). Tice received the grand prize in the Slamdance writing competition for the script, and then Redick’s found him and convinced  JJ Perry to direct.

Even though Jamie Foxx is the lead, the supporting cast is no less popular. Zion Broadnax from Abbott elementary is playing the role of Paige, the daughter. Steve Howey from Shameless is there and his character’s name is mike, Nazarian. Tetiana Gaidar, who has previously worked as the tactical weapon trainer, plays the role of Sophia. She has worked in television shows like Hunters, Borderlands and Resident Evil.

Perry convinced Snoop Dogg by saying “I will make you an action star brother”.  The film is produced by Chad Stahelski, who also produced John Wick.

Fans have been eagerly waiting for this vampire-hunting Day Shift. They have been sharing the trailer and posting reaction videos on YouTube. The level of action drama seen in the trailer was not expected by the audience. Our infamous Snoop Dogg is already very well known among the fans and people were excited to see him in this movie alongside Jamie Foxx.

One tweet read, “OMG! Jamie Foxx, Dave Franco, Megan Good, and The Snoop Dogg in one movie!! Sign me up for day shift”.

Cinema news houses have been sharing the trailer, posters, and looks of the cast members.

One tweet read, “Alright everyone! bring out the holy water, the crucifers, stay in the sunlight coz Jamie Foxx and Snoop Dogg are doing some vampire hunting…day shift coming out on Aug. 12th, 2022”.

Instagram had some really great comments on the trailer of the movie. Fans made comments like- “definitely watching this!”, “Snoop is on it! We are most definitely watching it”, “this looks fire!”, “I have been waiting for another vampire movie with a black lead.” One of the comments described Jamie Foxx as “one of the most talented artists of our time. Snoop and him! I can just imagine the comedy!? Lmao.”

What Is The Movie Day Shift To Be About?

This movie is JJ Perry’s directorial debut. As he was the stunt coordinator for john wick: chapter two, producer Chad Stahelski said in an interview- “I’ve known and worked with Perry for a long time. He has this unique vision for Day Shift, which makes it a fantastic directorial debut project for him.”

The trailer has a lot of energy and hints of comedy and violence. With Foxx seemingly embracing his role, fans had a lot of action and shocking moments. And it is worth watching Snoop Dogg contributing to his acting career with his role in this film. While the premise seems entertaining with “pool cleaning job”, and “vampire hunting” it’s a no-brainer why Netflix chose to commission this film.

A dad has a pool cleaning job which is actually a cover for his side hustle which is- “vampire hunting” and he gets paid after collecting the “fangs”.

As there is a mention of John Wick in this movie, as the director is directly related to it, fans expected it to be perfect.

The trailer highlights the action scenes and shows a bright, fun world of secret societies and high-risk fighting scenes.

Netflix released an “inside look” of Day Shift which showed us behind-the-scenes footage and Jamie is seen saying that this movie has a lot of “eating popcorn moments”, which left the audience wanting more.

Avengers: The Kang Dynasty Release Date Officially Confirmed!! Here Are All The Updates