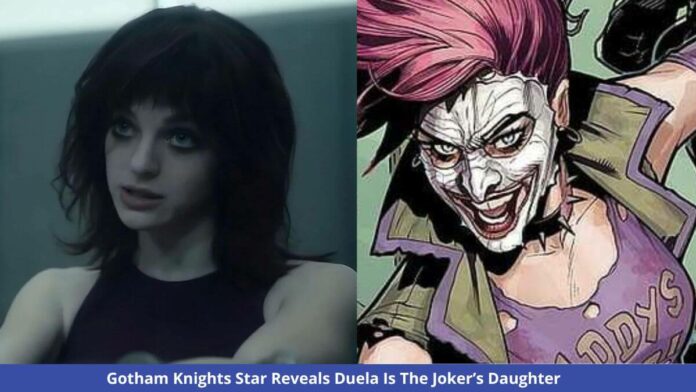 Olivia Rose Keegan, one of the Gotham Knights cast members, has confirmed that Duela would be portrayed as the Joker’s daughter in the next DC series. Through the release of one show after another starting in 2012, Greg Berlanti’s Arrowverse has helped The CW gain some notoriety for its superhero characters.

A television series adaptation was said to be in the works at The CW in December 2021. As executive producers alongside Greg Berlanti, Sarah Schechter, and David Madden through Berlanti Productions, Natalie Abrams, James Stoteraux, and Chad Fiveash are presently penning the series.

The Court of Owls are antagonists in a video game with the same name that occurs in a post-Bruce Wayne Gotham, but the two endeavors are unrelated. The CW requested a pilot episode in February 2022 for evaluation. Gotham Knights were picked up by The CW for a series in May 2022. In 2023, the first episode of the series is expected.

The channel is adding an extra DC TV series to its currently small portfolio of comic book programs in 2023, so it won’t be any different. The CW’s second Batman-related program, Gotham Knights, will premiere in 2023 and was created by a team that includes writers and producers for Batwoman.

Despite sharing the same creative team as Batwoman, Gotham Knights won’t be an Arrowverse spinoff and won’t be associated with the forthcoming video game of the same name.

In the planned television series Gotham Knights, Turner Hayes, Bruce Wayne’s adoptive son, and several of the villains’ kids are charged with killing Batman. One of the DC characters that will appear in Gotham Knights is Duela, who will be portrayed by Olivia Rose Keegan. DC aficionados will recognize Duela as the Joker’s daughter, who has a very complicated past in comic book history.

Even though Gotham Knights won’t debut until the following year, one important aspect of Duela on The CW has been confirmed. In an interview where she also describes her character’s development, Keegan directly reveals that she is the Joker’s daughter, contrary to what the Gotham Knights teaser merely hinted at.

Out of all the main characters, Duela, according to Keegan, will probably be a wildcard, sharing the following traits:

“Duela is like the full manifestation of all your crazy instincts, and I believe we all have those parts of us,” the author said. But to watch and say, “Oh, what if you let it take up your entire self?” is totally ridiculous. She is referred to as “Fireball,” “Wildcard,” and “the Joker’s daughter” as a result.

Even if it was expected that Gotham Knights’ Duela would somehow be connected to the Joker, it makes sense why there was some skepticism.

She or he is the child of Three-Face, also known as Evelyn Dent and the Two-Face of Earth-3, and goes by the name Duela Dent in comic books. Although Duela’s existence has been altered numerous times in the comics, Gotham Knights is not the first time the character has appeared on a CW program.

Duela made an appearance in the episode “Grinning From Ear to Ear” of Batwoman season 1 performed by Alessandra Torresani. Despite this, Duela was revealed by Batwoman to be Evelyn’s daughter and Harvey Dent was her uncle.