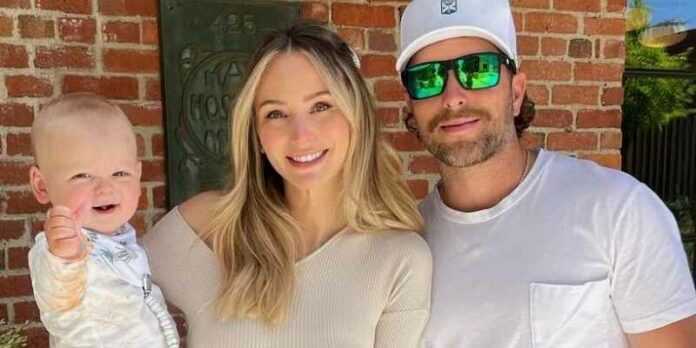 It is a precious moment for Lauren Bushnell and Chris Lane. The couple is ready to welcome their second baby very soon. Moreover, the fans became excited after they declared that the second pregnancy was like an “unexpected surprise”. For some, this was really a weird comment from the would-be parents. But on being asked, they only stated that the incident was a big surprise.

They Revealed Monday About The Second Child Together, Due Last This Year

The expansion of the family is truly overwhelming news for the couple as well as their followers. Yesterday, on 6th June 2022, the couple revealed this good news in front of the public. The 32-year-old Lauren and the 37-year-old Chris are already the parents of a 1-year-old cute baby boy. The name of this star kid is Dutton Walker. But now, he is going to have another companion to play it with in the family.

The cute photo of the family revealed Lauren’s baby bump so clearly. In between the duo, the little Dutton made a place. His t-shirt had the word “Brother” written on it. This indicates the only son of the couple is going to turn into an elder brother.

The expected time of delivery is October. The family is thus experiencing a splendid time with all the new feelings every day. Although Chris Lane and Lauren Bushnell already embraced parenthood, this was indeed a special moment. Moreover, this time they have the apple of the eye with them also to share the moment.

Shocking News For The Couple

In 2019, Bushnell tied the knot with Lane and the two seemed to be a very happening couple. In the words to Chris, their relationship became stronger after their first pregnancy with Lauren. Reports say that he expressed how lucky he is for getting a woman like Lauren in his life. He feels that no one could have been a perfect life partner for him ever more than his beloved Lauren.

Amidst these loving words, he also mentioned how Lane’s parents wish to have a baby girl this time. However, the proud father thinks that the newborn will be another boy. Now, all is in the hands of the Almighty.

Now the would-be mother finally revealed how shocking this news of the pregnancy was for her. Moreover, she even expressed with laughter that the second time conceived was totally an unplanned event. Hence, when she came to know about it, it was the biggest surprise and shock that she has ever got. However, although the timing for the second child did not match the expectation of the couple, it was a happy feeling. The duo always wanted to have only two kids. Hence, the news of the second pregnancy was like a complete family feeling.

Planning For The NewBorn

The Bachelor icon did not hide the emotions and excitement while talking about her sweet struggle. But they have some other plans this time. In a recent interview, the couple said that this time, the activities will not be similar as they did at the time of their first baby’s birth. Moreover, the special occasion will be celebrated in a different and more pompous way.

Apart from this, the parents are now more mature and prepared to welcome the little bundle of joy. The mother is looking more confident this time without any doubts in her mind. Previously, they were not very much planned about the child. But this time, they already have experience in handling a child. Hence, the level of preparation will be much more than the time of the first delivery.

Lauren also added that they are having mixed feelings many times. Often, the duo feels that they are absolutely ready with all the expected things on their bucket list. But on the other hand, the thoughts of some uncertain events let them be in a little doubt. It is indeed a great awakening for both the actors as they are going to welcome the second baby.

The special news of Chris and Lauren filled all the fans with joy. The good news came to them as the year began. Hence, we can easily conclude that 2022 is going to be a rocking year for this fabulous couple and their families. Moreover, the infant is also ready to welcome his little brother or sister. In the white shirt, he also looked very smart along with his parents.

The stylish lady flaunted the cute baby bump with pride and declared that very soon the addition to the family will complete the family picture. They received numerous good wishes on the Instagram handle from friends, family, and fans. Let the couple enjoy the moment and give birth to a healthy baby.