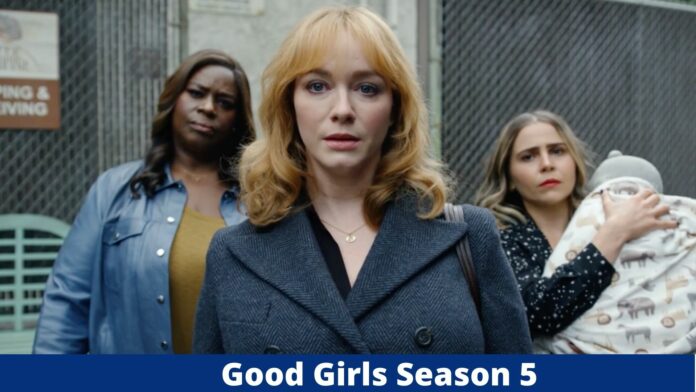 Good Girls is an American crime comedy-drama television series created by Jenna Bans that premiered on NBC on February 26, 2018, and ended on July 22, 2021. The series is executive produced by Bans, Dean Parisot, and Jeannine Renshaw for Universal Television. The series was canceled in June 2021, following four seasons.

Why Was Good Girls Season 5 Cancelled?

Good Girls remains one of the most peculiar situations in television since the acclaimed series was canceled after its fourth season before it could reach a conclusion. Today, Good Girls season 4, apparently, its final season has already ascended to the number two spot on Netflix’s list of most popular shows, prompting new doubts about why the program was canceled.

Parts of this are available to the public, while others remain a mystery. Despite Hendricks, Retta, and Mae Whitman all agreeing to take pay cuts for season 5, Montana’s contract is the most frequently cited story in the media. Christina Hendricks and Manny Montana reportedly did not get along on set, despite the fact that Hendricks, Retta, and Mae Whitman all agreed to take pay cuts. Nonetheless, it is odd that a program might be canceled due to the intransigence of a single actor, as one would generally assume that the character would be written out and the show would continue.

When the cancellation of Good Girls was revealed, however, the other cast members openly lamented the show’s demise. Netflix reportedly examined the prospect of acquiring the series, but negotiations with NBC did not result in an agreement. Also suggested as a reason for the cancellation of the series is “financials.”

Three suburban Michigan mothers, two of whom are sisters, are struggling to make ends meet throughout the series. They are fed up with having everything taken from them, so they plan to commit an improbable heist by stealing a supermarket, only to find that they are in for more than they bargained for. Their successful heist attracts the notice of the shop manager, who remembers one of the ladies, for a purpose other than the money, as well as the attention of a mafia crew using the supermarket as a front. Now entangled in a succession of gang robberies, debts, secrets, and familial problems, the others are steadily led down a path they never considered taking. This women-empowerment series challenges patriarchal norms and demonstrates how strong, independent women maintain their families and alter their lives.

The Ending Of Good Girls Season 4

When the fourth season of Good Girls concluded, there was still talk that the show might be renewed for a fifth season, which is why the season finale left certain narrative threads unresolved. At the conclusion of the fourth season, Beth Boland (Hendricks) is elected to the city council. Beth’s husband Dean (Matthew Lillard), sister Annie (Whitman), and pals Ruby (Retta) and Stan (Reno Wilson) are all going to travel to Nevada to escape their criminal lifestyles, but Mick (Carlos Aviles) arrives at Beth’s home and shoots her.

In a flash-forward, we find that Beth, Dean, Ruby, Stan, and Annie have really relocated to Nevada. Beth understands, however, that their new lives are just as tangled as their old ones, and she pushes her companions to commit yet another crime, during which she is again shot. Beth awakens in Michigan and realizes that Nevada was all a dream. Her gunshot wound is not deadly, and the shooting was really staged. It was Mick’s pistol that was used to kill counterfeit money maker Lucy (Charlyne Yi) during season three. Beth knows that her fingerprints are on the pistol, which might land her in jail. Beth rejects Ruby’s suggestion that they all move to Nevada to put their criminal pasts behind them, stating that she has no desire to do so. Annie understands that Beth might be in grave danger, so she gives herself in for the crime and takes the fall so that Beth would not have to.

In the meanwhile, Ruby and Stan must decide if they truly wish to relocate to Nevada. Stan provides her with an ultimatum: come with us, your actual family, or remain with Beth and Annie. In the show’s closing scene, Ruby is seen packing. Or, will she leave? Or she may have been unpacking. Never will we know.

Beth and Rio, the money launderer she has been working for/flirting with for three seasons, sit on their park seat in the last scene, but the tables have been turned. Because he has always held the upper hand in their relationship, she has lived her whole life up to this point as a low-level criminal. She ultimately informs him, “You now work for me,” to which he replies, “You got it, boss.” Now that Beth is a member of the city council, she has more authority than she ever has, and she can finally become a major criminal.

As we stated above season 5 was canceled after season 4, and there is no trailer for good girls season 5. Let’s watch the trailer for season 4 of good girls.

Where You Can Watch Good Girls?

Netflix is presently broadcasting all four seasons of Good Girls in the United States. Amazon Prime Video also offers the option to purchase individual episodes as well as entire seasons.

The review aggregator website Rotten Tomatoes reported a 63 percent approval rating based on 51 reviews of the series’ first season, with an average rating of 6.3/10. The website’s critical consensus states, “The narrative of Good Girls may not be fully credible, but its leading actresses provide outstanding performances.” On the basis of 22 reviewers, Metacritic assigned a weighted average score of 60 out of 100, signifying “mixed or average reviews.”

The second season of the series has a perfect rating with an average score of 6.3/10 from nine reviews.

Six critics have given an average score of 8.5/10 to the third season of the series, giving it a perfect score. Based on 6 reviews, the fourth season has an approval rating of 83% and an average rating of 7.4/10.