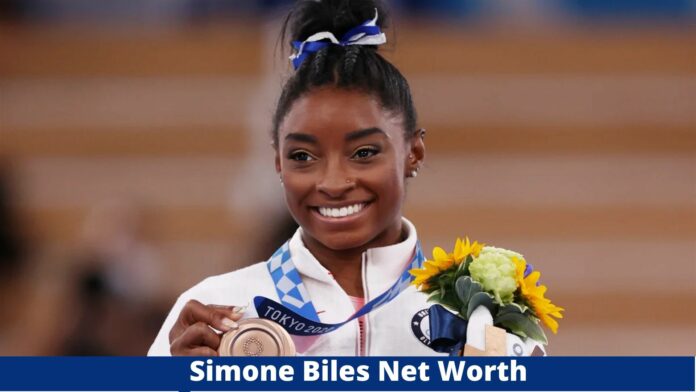 Simone Arianne Biles was born on March 14, 1997, in the United States. With a total of 32 Olympic and World Championship medals, she shares the title of the most decorated gymnast in history. She is tied with Shannon Miller for the most Olympic medals earned by an American gymnast with seven. She is regarded as one of the finest and most dominant gymnasts ever.

Shanon Biles, her biological mother, was unable to care for Simone or her other children, Adria, Ashley, or Tevin. All four entered and exited foster care.

In 2000, after learning that his grandkids had been in foster care, Biles’ maternal grandfather, Ron Biles, and his second wife, Nellie Cayetano Biles, began temporarily caring for Shanon’s children in the north Houston suburb of Spring, Texas. The couple legally adopted Simone and her younger sister Adria in 2003. Harriet, Ron’s sister, and Shanon’s aunt adopted the two eldest children. Biles is a citizen of Belize through her adopted mother and considers Belize to be her second home. Biles and her family adhere to the Catholic faith.

In 2012, Biles decided to transition from public education to home school, enabling her to expand her weekly training time from 20 to 32 hours. She completed her secondary education at home, graduating in the middle of 2015. Biles committed verbally to UCLA on August 4, 2014. She intended to delay enrolling until after the 2016 Summer Olympics in Rio de Janeiro; she signed her National Letter of Intent with UCLA in November 2014. She stated on July 29, 2015, that she will become professional and renounce her NCAA eligibility in order to compete for UCLA. In January of 2018, Biles was enrolled in online business administration courses and acted as a brand ambassador for the University of the People.

It is estimated that Simone Biles has a net worth of $16 million. Due to her numerous championships and endorsements, she has acquired considerable wealth. She is well-known and has over 4 million Instagram followers under the account @simonebiles.

How did Simone Biles accumulate her wealth?

Simone Biles is the most accomplished gymnast in history. She amassed most of her income by competing in gymnastics at the Olympic level, and she is affiliated with a number of renowned sporting companies.

Simone also had a sponsorship arrangement with Nike, but she opted to sever connections with them and sign with the “Athleta” brand because she believed the latter was more aligned with her basic athletic and personal ideals.

Biles began her gymnastics career at a very young age; at age eight, she was practicing with trainers such as Aimee Boorman. She competed in the American Classic in Houston when she was 14 years old. She placed third. In 2012, she won the American Classic held in Huntsville. She was chosen to the US Junior National Team that year. In 2013, she made her senior international debut at the American Cup before competing at the City of Jesolo Trophy and contributing to the United States team’s gold medal victory.

Márta Károlyi invited Simone to a private camp after her dismal performance at the 2013 US Classic, and the young gymnast also began training with a sports psychologist. Following the improved performance, Simone was picked for the World Championships team. She won another first-place finish at the 2013 Artistic Gymnastics Championships because of another flawless performance. By that point, the 16-year-old had already proven to be an extraordinary talent, outperforming far more seasoned international gymnasts.

Due to a shoulder injury, Biles had a poor start to 2014, but she quickly recovered to win the US Classic in Chicago by a significant margin. She participated in the World Artistic Gymnastics Championships for a second time, assisting the United States in achieving another triumph and gold medal. In 2015, she won the AT&T American Cup competition in Arlington, Texas. This performance contributed to her James E. Sullivan Award candidacy. The City of Jesolo Trophy, the U.S. Classic, and the U.S. National Championships brought further triumphs.

Biles, among other prominent American gymnasts, won the 2014 World Artistic Gymnastics Championships in Glasgow, Scotland, for the third consecutive year. In this time, she had won a total of 14 medals at the World Championships. Biles was picked to represent the United States in the 2016 Summer Olympics in Brazil as a consequence of a streak of outstanding performances in 2016.

Simone helped the United States team qualify for the 2016 Olympics in the first position, and she also qualified as the best gymnast in four of the five individual finals. She quickly won her maiden Olympic gold medal in the team event, followed by a second in the individual all-around competition. She won a total of four Olympic gold medals, including a bronze in the balance beam final and another gold in the women’s floor exercise final. After a temporary break from competition, she resumed her gymnastics career in 2018 with improved routines.

Over the years, Simone Biles has supplemented her gymnastics revenue with a variety of business sponsorships. She famously starred in a Tide ad alongside a lot of other gymnasts prior to the 2016 Olympics.

In 2015, she secured a long-term, exclusive contract with Nike. She also inked a partnership with GK Elite Sportswear to create a line of Simone Biles leotards in the same year.

Simone and her other “Final Five” colleagues were featured on the cover of a limited-edition Wheaties box in August 2016.

After her victory at the 2016 Olympics, Simone obtained significant endorsement deals with, to mention a few, the following brands:

In terms of endorsements, Simone was the highest-paid Olympic athlete prior to and during the 2020 games. From 2019 through 2021, she earned at least $20 million from endorsements.

In April 2021, just three months before the 2020 Olympics, it was widely reported that Simone had signed with Athleta instead of Nike. Included in the agreement was a pledge by Athleta to stage a nationwide show for Simone following the Olympics, in direct competition with an exhibition organized by USA Gymnastics. Additionally, Simone and Athleta will launch an activewear collection.

According to reports, Simeone quit Nike because she no longer believed the firm shared her ideals. She was particularly concerned about Nike’s history of scandals, employee complaints, and other difficulties that have plagued the dominating sportswear manufacturer in recent years.

From August 2017 until March 2020, Biles was in a relationship with fellow gymnast Stacey Ervin Jr.

Since August 2020, she has been in a relationship with professional American football player Jonathan Owens.

Owens and Biles confirmed their engagement on February 15, 2022.

How did Simone Biles get so wealthy?

Simone Biles, like many athletes, derives a substantial percentage of her money from brand sponsorships. Yahoo Finance reports that Hershey’s, Nike, and Kellogg’s, to name a few, have sought her award-winning appeal.

Simone Biles is a very popular name in America. She has achieved significant international achievements on behalf of her country. Simone Biles also owns many properties in the United States. She has a home in Spring, Texas, where she resides. She has other real estates in Texas and Ohio.