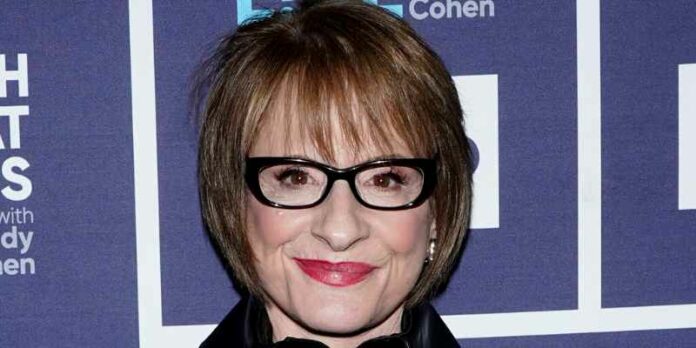 After the pandemic, wearing masks is one of the mandatory things that people should practice. However, nowadays, many are risking their lives by not wearing masks at all places. Patti LuPone is very strict about this and thus lashes out at the theatergoers for not observing this precaution.

During the talk-back after Company, he warns two patrons that they should wear the mask covering the nose. It is essential to learn the correct way of wearing the mask. Otherwise, the effect is of no good. Patti lost his temper when the patrons were not ready to follow the restrictions during the talk-back on Tuesday.

The details of the issue are hereunder.

Patti LuPone Calls Out Theatergoers For Not Wearing The Mask

The legendary artist of Broadway can now be seen in one of the recent movies of Stephen Sondheim titled Company. American Theater Wing recently organized a Question and Answer session of the star cast to address the queries of so many viewers.

But the ceremony took a different turn when Patti LuPone interrupted two Theatergoers as they were making an entry without masks. Someone captured this shot and posted it on her Twitter account. After repeated warnings when the patrons did not follow the rules, the actress was forced to lash at them and told them to leave the venue at once if they could not abide by the rules.

One must follow the rules and restrictions while being in a public event. Moreover, the theatergoers must show responsibility amidst this coronavirus pandemic and observe precautions. Although the effect of the virus is now low, the doctors are continuously telling us that going off without masks is not okay. Hence, if some people do not realize the fact, it is the responsibility of others to make them understand the importance of wearing masks.

LuPone did only that, and there is no harm in it. However, it was not the correct way of behaving in public for a renowned personality like her. So, it caught the attention of many. But the patrons were not very polite either and misbehaved with the star openly.

Lifting Of The Mandate Of Masks

In March, the New York City government lifted the mandate to wear masks in every place. However, there are some specific restrictions of the National Trade Association for Theater Industry. Hence, this industry’s protocols may not match the overall ruling of the government.

Therefore, if you are attending any program under this association, you must maintain the rules. It will be deemed that the audience will follow the restrictions and maintain all the protocols of COVID-19. It is an initiative by the theater industry to protect the cast and crew members from the harmful effects of coronavirus.

Patti also became the victim of the disease in February and March. Unfortunately, this led to the absence of the personality from 10 performances. For consecutive 18 months, Broadway remained closed due to the worldwide pandemic engulfing almost every corner. Thus, the premiere of the Company was also delayed for all these months. Finally, after the lockdown, Broadway opened for the first time to launch the film.

Version Of The Insiders

One of the insiders of the show stated that the actress kicked the arrogant theatergoers from the event. It was unlikely that someone behaved so rudely with such a prestigious personality on being asked to wear the masks properly. As a result, they also received a similar reaction from the other side.

The video clip showed that the patrons uttered that they pay the salary of Patti Lupone. This is a very vague comment which does not have any truth. Hence, as a reply, the artist said that she was being paid by the producer Chris Harper.

Patti’s incredible bond with the audience has always remained a talked-about thing. Moreover, her efforts as a responsible citizen and advocate are definitely notable. All her associates and organizers of the show supported her in this issue. Moreover, they thanked the lady for thinking so much for the welfare of the society at large. In one of the statements, the producer added that the cast, crew, ushers, patrons, and all other associated persons are standing with Patti in this connection. Broadway can remain open only if the situation stays within control.

This incident is not the only one where Patti faced a negative and disturbing experience with the audience. A similar clip came out in public in 2009 when Patti was performing on a number of Gypsy. It involved taking pictures of the artist without her permission. The famous personality believes that everyone should maintain decorum while in public.

However, it is unfortunate that most of us are now not bothered about public manners. The star felt insulted by the action of the offender and ordered the authorities to make them leave the show. Moreover, she even refused to sing the penultimate number as per the prefixed schedule.

The American football sector is incomplete without Michael Oher. His specialty is offensive tackle. By 2022, he collected lots of money by playing for various teams. Moreover, the world also appreciated his book, which came out in 2011. Does Michael...
Entertainment