Joey Defrancesco, the munificent Jazz Organist, saxophonist, and trumpeter of America died on...
HomeNewsWild Fire Under... 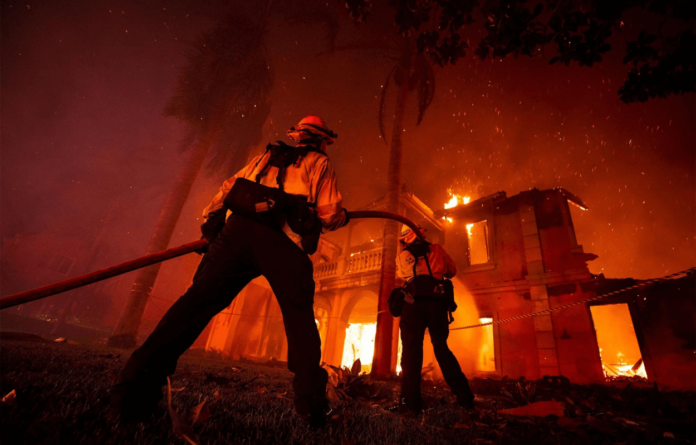 A fire broke out by the intense pacific ocean winds in a community in the Laguna Niguel region in California which outlooks the pacific ocean on Wednesday. It paved the way for the burn down of at least 20 homes. It is said to be the effect of climate change in the California region.

The fire spread across the region to about 200 acres burning many homes. The firefighters were trying continuously in the process to prevent the fire from spreading out more to other parts of the region. There has been no reported injuries or death.

The orange county supervisor Katrina Foley said on Wednesday night that the fire was 0% contained and a local emergency order remains in the Laguna Niguel region. It has been estimated that more than 20 homes have been destroyed in the fire.

The chief of the orange county fire authority, Brian Fennessy has said, “the winds have died down a bit but not before pushing the blaze to 200 acres”. The fire was spread to 200 acres. The coastal wind that caused severe damage has emerged from the pacific ocean.

The national weather services neurologist Brandt Maxwell said that the wind gust reached 30 mph in orange county “I guess it’s just disheartening that we are already seeing a fire that is this aggressive and its only may. Usually this is something that we see later on in the summer and especially the fall” he added to the statement.

The orange county fire authority chief, Brian Fennessy said that the drought conditions in California have left the vegetation so dry that it doesn’t take much time for the fuel to ignite. “The winds we see today are normal winds, we are seeing spread in ways we have never before. Fire is spreading quickly into this very dry vegetation and taking off”

“The threat to life and property and firefighter life is extreme” Fennessy added.

The fire first emerged near a water treatment plant. There was a tremendous spread of fire and smoke afterward. It is said to be having an adverse effect on the air quality in the area making it hazardous to breathe. The official has evacuated hundreds of homes. Temporary shelters have been provided in the crown valley community center for the residents of the Laguna Niguel and their pets.

Climate change is the key factor behind the wildfires or coastal fires that just happened. It has been the major reason for the wildfire in the western united states. The number of wildfires happenings has been on an increase. It not only affects the environment and the people but also the state’s financial system as a whole.

According to the California Department of Forestry and fire protection, there have been many fires in the past five years and they have burnt about 4% of the state’s total area. It can be expected to be more in the upcoming years.