Joey Defrancesco, the munificent Jazz Organist, saxophonist, and trumpeter of America died on...
HomeEntertainmentHouse Of Dragons... 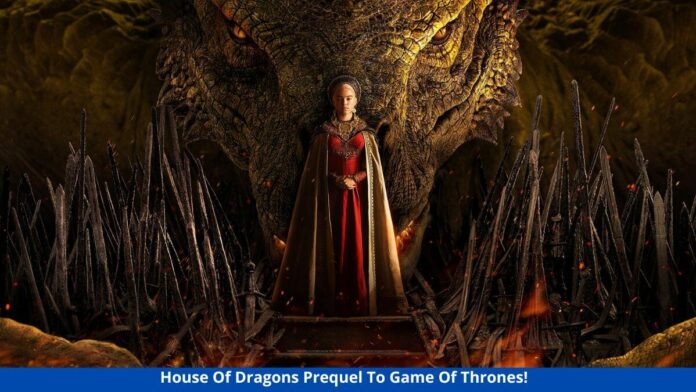 House of Dragons is definitely the prequel to the most highly acclaimed series Game Of Thrones. On 21 Aug 2022, at 2 am this Prequel will be at the hands of the viewers and will be a binge-watching spree. Without watching Game of Thrones one doesn’t understand the prominence of the House of Dragons. This is the reign of the House of Targaryen, which is the true heir to the throne.

House Of Dragons Prequel To Game Of Thrones!

Without the brief description of what happened in Game of Thrones, watching House of Dragon would be in vain. This new show is based on George RR Martin’s astounding novel ‘ Fire and Blood’ and it is set two centuries before the events of Game of Thrones.

Since the original show ended with eight seasons in 2019, the fans were eagerly anticipating the prequel around the globe.

The main theme or the plot around which Game Of Thrones revolves is around, in its most basic peripheral level is the power struggle. Their insatiable hunger need for power is the fundamental point where the story revolves. The power struggle, who wants it, how they attain it, and by what means is the axis of this remarkable series.

The mad king Robert Baratheon years after a rebellion sits on the Iron Throne. He seeks help and protection from the most powerful family among the nine other families. The Stark family was the most vulnerable and highly powerful and King Robert sought the hand of the lord Eddard Stark to be the hand of the king.

The story commenced when  Eddark Stark was killed mercilessly. He was labeled as a traitor to the Iron Throne and his head was severed. The rivalry between the nine families sprouted and they declared war against each of the families. These nine families fought for power and they were unaware of the return of an ancient enemy which was dormant for millennia.

The true heir to the Iron Throne was that of the Targaryens. But the circumstances made the Targaryens flee from their homeland. The intoxicated mad king was killed by an attack and now the iron throne was in the hands of his younger son Joffrey.

But when the story unfolds we could learn the fact that Joffrey is not the true heir to the Iron Throne because he is not the son of the mad king and Cersei  Lannister.  He was the by-product of an incestuous relationship with Cersei and her handsome brother Jaime Lannister.  Incestuous relationships were common in the era when brothers and sisters could have sexual relationships. We can interpret this series in different ways and the highest interpretation based on Game Of Thrones is related to Feminism.

It is a wide range of the spectrum, where women are objectified. In most series, films, and dramas women are often portrayed as an object. The early seasons of Game of Thrones were criticized because of the misogynistic content and demonstration of women as sex objects. So the game of thrones is not a feministic friendly show since it vehemently depicts women as being vulnerable and a mere substitute for sex.

Women are only subjected to sexual pleasures and the series, of films depicting this, only accentuate the misogynistic attitude towards women. Since it is a highly renowned series, it never falls short of criticism because of the stark portrayal of its women characters though powerful, but always bending their knees in front of enticements.

This series is of esoteric nature because there are umpteen characters and always a background story behind every character. Daenerys Targaryen was forcibly married to Khal Drogo because her brother firmly believed that Khal Drogo’s army could retake the Iron Throne. We cannot write the entire plot of the Game Of Thrones, because it is too prolix to be explained.

The Game of Thrones, albeit so prolix and befuddling, has a wide range of fans because it depicts the disintegration of cultural and religious values and where people are deeply affected by the trials of their ego and enticements.

The heroes of this series strive for prosperity and control amidst the chaos. Art, literature, and music could give a pleasant life and will fill the lacuna for the Americans who are not interested in church or have a religious affiliation.

So watching these sorts of series, and films, and engaging in these kinds of habits would replenish lives with new perspectives through television was deemed as a cultural wasteland.   This television series would make the viewers astonished as its sequel Game of Thrones did before.

Fan’s anticipation is now coming to an end with the premiering of  House of Dragons, but the disappointing thing is that viewers couldn’t see their heartthrob characters from Game of Thrones since this prequel is starring new characters.

House Of Dragons Release Date, Cast, Plot, Trailer, And What To Expect