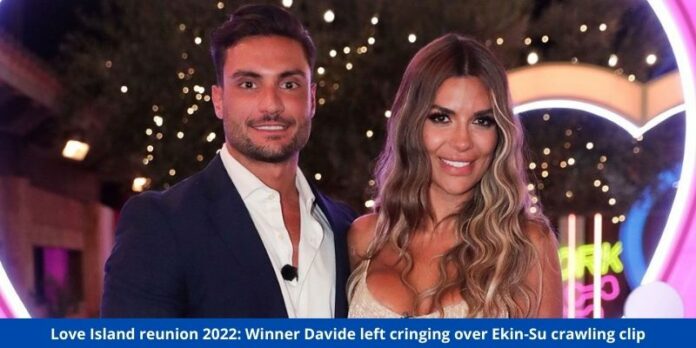 The Love Island 2022 contestants once again united under the same roof on Sunday as the showrunners arranged a reunion episode that ultimately turned the table, exposing the truth of the Turkish actress Ekuin-Su- Culculogu.

Ekuin-Su Culculogu was exposed before Davide Sanclimenti, who happened to realize what his lover was up to in the villa. The footage uncovered the highly sealed secret of Ekin-Su who crawled to the terrace to sneak a kiss from Jay Younger.

Davide was totally blanched when he happened to see with his own eyes what his partner was doing behind his back. When asked about the incident, Davide replied to the host Laura Whitmore that he was blindfolded by Ekin-Su and that he could not see the drama which had been played before him.

At the exact moment when the kiss was being shown on the screen, Ekin-Su extended her slender hands and tried to cover Davide’s vision.

The funniest reaction was given by Jay himself, who giggled when the footage of him kissing Davide’s girlfriend during the beginning of the show was screened before all. The clip clearly shows how Ekin-Su was desperate to meet Jay as she went to the terrace being concealed from others, literally by crawling through the floor, and her effort finally paid back when she shared a steamy hot kiss with Jay.

However, the confrontation did not worsen as Davide explained that they had already moved on. Davide also assured Jay, the former fling of his girlfriend by saying that he would always be one of Ekin’s boys. That cleared the air all of the sudden among the group.

Ironically, the winners of Love Island were summoned to show that their love was not real as one was cheating on the other. The reunion episode of Love Island was literally heated with arguments popping from either side of the venue including the conversation between Coco Lodge and Summer Botwe, both Casa Amor girls, over Josh Le Grove.

The boiled exchange of words made the fans go crazy as they reacted on social media claiming that the episode was dry, awful, and awkward. The Love Island fans were pissed off as the highly maintained impression was damaged with the reunion episode.

Coco and Summer were precisely fighting before the camera as the duo started to get heated over the exchange of opinions over Josh Le Grove. The heated brawl only ceased when the host Darren Harriot meddled among the pair to get them apart from getting into a horrible fight.

The argument was rooted when Coco shared on Saving Grace’s podcast about how she rejected Josh as the villa winded up when he was clearly sexually interested in her. The exact words were not suitable to the ears of Summer, who was dating Josh ever since they left the villa. Of course, Summer would be annoyed by the comment.

Darren went on asking silly questions with the former contestants and when a query regarding ‘who was getting a couple up’ was thrown at Billy Brown, Summer chipped in between and indirectly hinted saying that she knew someone who was wishing to get along with someone.

The statement was clear as water as Summer was hinting at Coco and she even intruded advising Summer not to drag herself into the television shows if she cannot handle her so-called big personality.

Coco then challenged Summer and between which Darren chimed in telling them that it was not the right time. Although the concern was calmed, Summer’s urge of owning the last word in the argument was still there as she spilled saying that she would never fight with anyone as long as she did not see any competition there. Just when Coco was beginning to mention Josh as her mate, Darren again interrupted and the line was cut off in the middle even before Coco completed it.

Even though the reunion of Love Island was filled with drama and emotions, the fanatics took to Twitter, naming it boring. One of the Twitter users keenly observed that none of the Islanders were actually present there mentally and thus it was too boring.

Hilarious of the comments was that one said that people were sleeping in the studio as if they were forced to sit on the couch and attend the reunion.

However, love and appreciation were only seen in the ways of the winners Davide and Ekin-Su as the fans were hoping to see the pair spending more time together before the screen.

Apart from the major names, finalists Andrew Le Page, Iniyah Polack, Luca Bish, Dami Hope, and Gemma Owen were spotted sharing the screen, unveiling the ups and down they had while being at the villa.