The much-awaited volume 2 of Stranger Things Season 4 is releasing today on...
HomeGamesMadden 23 Release... 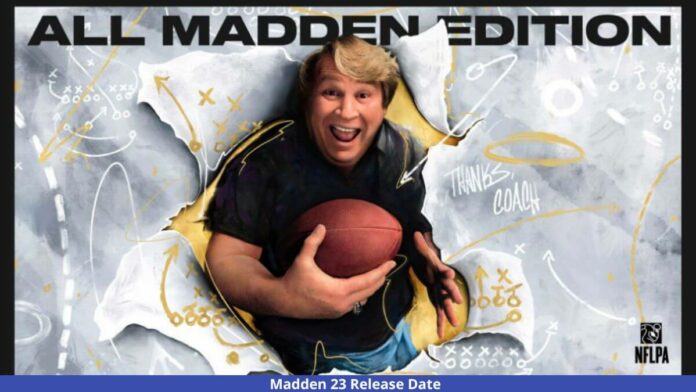 Coach John Madden himself is being featured as the madden 23 cover star for this game this year. Madden NFL Madden game series is named after Coach Madden, he was a football coach and television commentator who transformed the base of American football. He died at the age of 85 and as a tribute to his massive contribution to this sport he has been chosen as the cover star. Madden 23 trial release date was 2nd June 2022, it is now accessible on the internet.

The beginning weekend of the actual NFL campaign is the time when EA likes to launch its game. Though it got delayed for Madden 21 due to pandemic complications, this year’s Madden 23 is on time. It will hit the streets halfway through this year’s preparatory matches, releasing on date August 19, Friday. Consoles that will be getting Madden this year will be Sony and Microsoft only.

Madden NFL 23 new features include introducing a new physics-based gameplay system “FieldSENSE” and its subsystem “Hit-Everything”. FieldSENSE is estimated to entirely transform the Madden impression. It controls everything from the movement of the players to the detection of targets. This physics-based system provides players with ultra-realistic simulation and better control thereby giving authentic results. FieldSENSE comes along with the subsystem named “Hit Everything”, it introduces very new mechanics that allow the players to be wilder and more turbulent on defence. In other words, it redefines defence actions. It lets one execute tasks such as blowing up blocks, mid-air knockouts, force turnovers etc. Then comes the new “Skill-Based Passing” that allows only the receiver to catch the pass with surgical accuracy. Skill-Based Passing also conditions a new accuracy reticle and passing metre. New “360° Cuts” make it much easier for the ball carrier to hit the gaps from any position.

There has been an introduction of a brand new free agency feature, increased authenticity to Franchise Mode due to the introduction of Player Tags and Player Motivations, upgradation in scouting etc.

Free Agency is crucial to the team’s making in the NFL game. As the teams and players keep negotiating among themselves, a single move has the capacity to alter the whole landscape of the NFL. To increase the strategy and zeal of this period this season, better developing systems are created in Madden 23. These new additions are new screens, player motivation, extra evaluation periods, added salary cap etc.

Inside the new Agent Hub, the focus is put on making the information accessible and understandable while also enhancing the standard of flows through experience. In the centre and front are the player details, how team alignment is taking place with respect to the motivations, along with Interest from opponent teams.

Previously in older versions, the only player motivation was money, i.e. teams presenting more money were the ones a player directly signed in with. But now the scenario has changed, in this madden NFL 23 game version the players will have three motivations. At the beginning of the game a player will be provided with three motivations but with each passing year a player continues with the franchise new updates may add suitably. The game motivations will be provided in contrast with the composition of the team, location, coach supremacy etc. Some anticipated player motivations are Super Bowl Chase, Historic Championships, Scheme Fit, Head Coach Historic Record, Big market, Close to Home, Warm Weather State, Tax-Free state etc.

Various scouting improvements have been made with this year’s Madden 23 launch. A roundabout of 50 scouts is added, free agent scouts are doubled, and each position is made to have a minimum of one scout of special proficiency in each level.

What Do We Expect In Madden 23?

When Does Madden 23 Come Out?

The release date has been finalised and Madden 23 is coming out on 19 August 2022 on 29 August all versions of Madden NFL 23 will be available on sale.

Players now have the opportunity to avail of early excess of the All-Madden edition on 16 august 2022. The All-Madden edition can be availed via Xbox Games or Playstation store. The Madden 23 rating is relatively higher i.e. $99.99 than Xbox 1 and madden 23 ps4 versions i.e. $59.99.

The Madden 23 reveal video debut on June 16, 2022, along with a slew of additional announcements.