Joey Defrancesco, the munificent Jazz Organist, saxophonist, and trumpeter of America died on...
HomeEntertainmentSons Of The...

Sons Of The Forest Release Date, And More About Endknight Games Survival Game 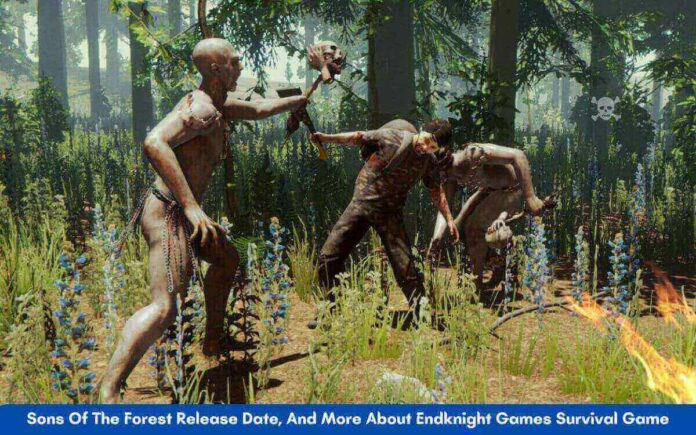 Sons of the Forest is the highly predictable sequel to the 2014 survival horror hit, The Forest. The Forest followed a 4-year long early access beta phase and was released for Microsoft Windows in April 2018, and for PS4 in November 2018.

This horror video game was developed and published by Endnight Games. The game takes place on a remote peninsula, heavily forested. Where the main character, Eric LeBlanc, takes a flight to go somewhere (undiscovered in the game), but the jet crashes and lands on this peninsula. They are left unconscious for a while.

Sons Of The Forest Survival Horror Game Release Date, Trailer, And What To Expect

Then, when our main character, Eric, seems half-conscious, he sees a man covered in red paint (which, to his surprise, turned out to be blood) taking off with his son. Now his mission is to find his son. With Eric, the game follows non-linear gameplay in an open-world environment and is played from a first-person perspective.

He has no set mission or quest, which in turn empowers the player to make their own decisions in order to survive. Later on, encounters locals on this peninsula, who turn out to be cannibals and mutants.

From the trailers released by Endnight Games, it can be speculated that Sons of the Forest might follow similar gameplay, and, of course, the game is set to be in a forest like The Forest. A trailer for the game released on the developers’ YouTube channel showed early waiting fans a glimpse of the upcoming game,

The very first trailer for the sequel was released at the 2019 Game Awards, but since then there have been only three trailers. With each trailer, you get more and more insight into the new game, be it its features, improved gameplay mechanics, or creatures. Yet it is unclear if Sons of the Forest will be a sequel or a sideways follow-up to The Forest.

The official description from the game’s Steam page tells us that a billionaire goes missing on a remote island, and the player finds himself on a cannibal-infested island. Fans have made theories around the description.

They believe that the billionaire talked about is actually Timmy from the first game, because at the end of “the Forest,” Timmy was seen investigating the island, and the map had a note that read “Site 2,” and it is believed that he has gone to Site 2 in search of answers regarding his condition.

Assuming he is suffering from the side effects of the Resurrection Obelisk, which previously mutated Megan Cross, she turns into a horrible monster (who kills her own father) towards the end of the first game.

Earlier, Sons of the Forest was scheduled to be launched in May 2022, but the developers from Endnight Game informed us through a tweet that it would take some time.

The team confirmed that they were “overly ambitious” with the early release date and that the delay would allow the team to deliver according to their vision for the next step in this horror survival game series. They have decided to move the release to 2023.

What To Expect From Sons Of The Forest Survival Game

In order to know about what can be accepted from the sequel, The Sons of The Forest, players can read the Steam listing for the game. Players have complete freedom to tackle the game the way they want to.

They don’t have any NPC (non-player character) shouting orders at them, nor are they given any missions that they don’t want to do. They have freedom. They can give orders and choose what happens next in the game.

As mentioned before, it’s a nonlinear game in an open environment. The player has to fight against a range of mutants and demons. Some might be human-like, and some might be something humans have never seen before. To protect yourself and those you care for, you must carry pistols, stun batons, axes, and more.

You can either survive alone or group up with your friends and share items and work together to build defenses against the demons. You will be able to feel every interaction, like using an ax to break down windows and cut out floors, or breaking sticks to make fires. It’s totally up to you if you want to build a seaside compound or a small cabin.

The seasons change in the game too, just like they do around us. So, you can either collect fresh salmon directly from streams in spring and summer or store meat for the cold winter months. On this island, you’re never alone. So, when the winter strikes, you won’t be the only one looking for meat, especially when food and resources become scarce.

The tweet posted by the team regarding the delay in the release of the game got 897 retweets and 132.9k views. which clearly shows the wait for this horror survival game. Fans eagerly waiting for the Sons of the Forest seemed upset by the delay but commented that they could be patient and wait for it.

Many tweets read ‘yes, it’s better to wait for a fully functioning, developed version which can be played for a long time rather than something that’ll only work for a few weeks.’ Despite how many seem excited about the sequel, Players believe the more time it takes, the better the game will be.

Park Chan-wook produced, co-wrote, and directed the 2022 South Korean romantic mystery film Decision to Leave. Tang Wei and Park Hae-il star. The film was chosen to compete for the Palme d'Or at the 2022 Cannes Film Festival, where...
movie

Rodrigo Garcia has directed the upcoming comedy-drama film titled Raymond and Ray which has already made its premiere at the Toronto International Film Festival this year. The Raymond and Ray release date has been confirmed and the film is...
News

Ryan Murphy’s Monster: The Jeffrey Dahmer Story is now on Netflix. Although the series gave us an idea about how not a child should be raised and how poor parenting results, it also has another side, where it talks...