The much-awaited volume 2 of Stranger Things Season 4 is releasing today on...
HomeEntertainmentInvincible Season 2... 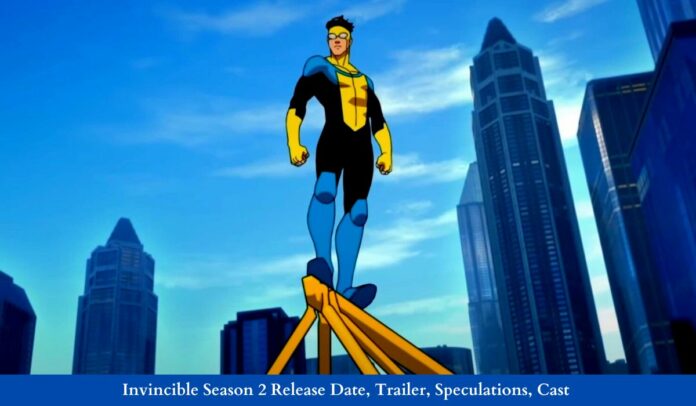 All those comic book fans waiting to watch Invincible Season 2 are in for good news. The story of the legendary hero, Nolan Grayson-voiced Omni-Man’s son, Mark Grayson, is what everybody is looking forward to. Released back in 2021 on Amazon Prime, the story followed how Grayson inherited his father’s superpowers.

The animated show garnered quite a few positive reviews for its bloody violence. It was hailed as one of the best-animated series in a long time. However, the eight-episode series ended quite faster than expected. For the unversed, the series ended with the devastating fight between Invincible and Omni-Man.

The series left many questions unanswered. The question arises, if Mark Grayson will take a new lead with his super-ego avatar, or will the world change its stance on superheroes? Now, comic series aficionados can only find out in Invincible Season 2.

Now, Amazon Prime, the OTT Giant, is yet to confirm when it will air Invincible Season 2. Robert Kirkman, the writer of the series, opined that it should not take a long time. However, the production seems to be taking a tad bit longer. 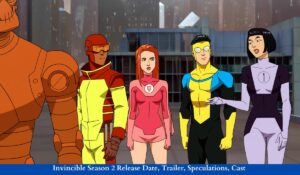 The acclaimed writer of the superhero comic series is keeping his fingers crossed on the release date of Season 2, as the excitement and craze surrounding the comic book series increase. According to the sources, Amazon Prime seems to have also given the go-ahead for Season 3.

And the sad part is, there is no trailer. The under-the-wraps stance taken by Amazon is driving fans crazy at times. Amazon’s Twitter account has released quite a few memes surrounding the comic series and some funny content.

The audience is also relying on all the posts released by Amazon, which include funny jokes and Robert Pattinson’s monologues.

In January 2022, one of the lead stars, Steven Yeun, revealed that voiceover work had not started. So, maybe that is the reason why the poster release has also been delayed. Everyone seems to be quite excited and looking forward to the release of Invincible 2.

The first series has already given away what the audience can expect in Season 2. At the event itself, Mark Grayson speaks to Allen, reprised by Seth Rogen, about the plans for the future. Moreover, the show ended with clips of all the dangers lurking in the corner, which he would probably have to deal with.

Firstly, there is the Squid’s Invasion of Mars, the Flaxans getting ready for a war, and Titan becoming much more powerful in crime. Then the audience also came face-to-face with snippets of the Battle Beast.

The audience also received an inkling of the mad scientist, D.A. Sinclair, reprised by Ezra Miller. He probably works for Cecil Stedman at the Global Defense Agency. So, Mark is probably going to have a lot of tasks on hand. The audience must not forget that Omni-man may still be around.

And Invincible may have to face him once again. Grayson also knows Viltrum’s true nature by now. Furthermore, he probably has to take on the responsibility of preparing the earth for the onslaught.

All those who have gone through the comics will remember how the superhero clad in a yellow and blue suit had to bear the mincing words of the Immortal Man, who had survived in the fight with Omni-Man.

Alongside, he has also been working relentlessly with the Guardians of the Globe and Cecil. Moreover, Invincible finds Omni-Man sitting on a throne and ruling one and all.

While speculating all of these, Robert Kirkman, responsible for bringing every character to life, revealed that Angstrom Levy would be a big part of Invincible 2. He is also one of the main villains of the series. The writer also revealed that all those who have read the comic books or seen the TV shows know what’s coming in Season 2.

Also Read: Never Have I Ever Season 3: Release Date, Cast, and Much More

At the end of the first season, the audience was treated to the idea that the world would know about Omni-man’s death. However, in reality, he would still be there. The last fight in Season 1 also affects Mark’s relations with his mother, Debbie Grayson. Sandra Oh will also be around, probably for a second time.

The audience will also get to see more of the Guardians of the Globe. So, it is time to get ready for more from Gillian Jacobs’s voiced Atmo Eve, Jason Mantzoukas’s voiced Rex Splode, and Khary Payton’s Black Samson, to name a few. Then, there is Grey Griffin’s Shrinking-Rey, Malese Jow’s Dupli-Kate, and the Monster Girl’s character as well. Whew! That is one stellar star cast that the audience will have to deal with. If the audience thinks that’s all, it’s time to think again.

The Invincibles Season 2 makers are not taking things slowly, yet. Ross Marquand will be back as Rudy Conners. He might even give the voiceover for the robot in place of Zachary Quinto. For all those waiting out there to catch up on the show on the video-on-demand platform, Amazon Prime can actually make guesswork of what is to come if they watched Season 1.

The majority of the characters that made it out alive there will definitely be coming back in Season 2. However, there will be some new characters as well. However, the audience has their fingers crossed as Amazon has not announced anything yet.

All those wanting to catch up on the superhero series, Invincible 2, must get a Prime subscription as soon as possible. There is a lot of confrontation that is yet to happen between the father-son duo too. And the world is waiting. More secrets from the Viltrumite Empire surface in Season 2.