Joey Defrancesco, the munificent Jazz Organist, saxophonist, and trumpeter of America died on...
HomeSeriesIn The Soop:... 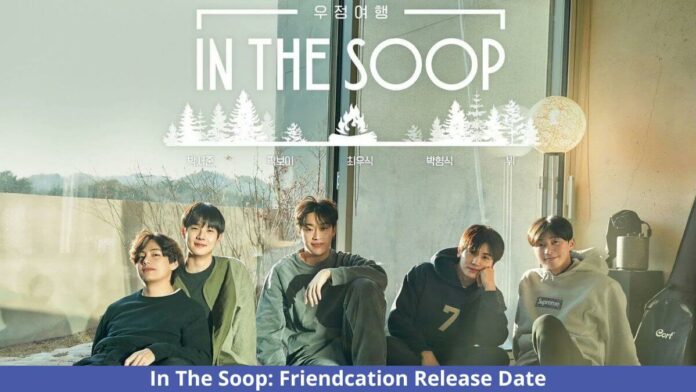 The new BTS offshoot series of In The Soop, dubbed In The Soop: Friendcation, is much fun. With the help of some of his renowned buddies, BTS member V (Kim Tae-Hyung) is set to feature in a new television series. It’s time to find out who the cast members are and what the show is about. The Soop: Friendcation was shown on JTBC on July 22, 2022, at 9 PM (KST). The show aired at 11 PM (KST), or 7:30 PM, on Disney Plus Hotstar (IST).

In The Soop Friendcation ft BTS’ V And The Wooga Squad

It initially premiered as a reality show involving members of BTS members. It premiered on the weverse app in August 2020. The show’s plot revolved around the septet’s vacation in a distant woodland. Many people were excited to see their favourite characters doing cooking and other activities. The show was so successful that it would make a return for fans.

Meanwhile, viewers were looking forward to V’s spinoff series, which premiered this fall. A spinoff of In the Soop, it sees the five celebrities embark on a vacation to the countryside of their home South Korea to seek recovery. In Korean, the word ‘soop’ means ‘forest’.

V is taking an orientation during his little break from BTS. In The Soop: Friendcation, a new mini-doc series about V and his friends, was published on July 11 with a new trailer.

In The Soop: Friendcation Release Date

In The Soop: Friendcation series premiered on July 22 in certain regions. Then, the new episode aired on Fridays and Will be available on Netflix.

There’s no word yet on when the series will be released in the United States.

Billboard reports that there will be four episodes in the series. The last episode of the season aired on Friday, August 12, at 10 p.m because it airs once every week.

In The Soop: Friendcation Cast

In The Soop: Friendcation Where To Watch?

This new release of in the soop: friendcation disney+ will have netizens ready for some genuinely healthy Wooga Squad entertainment if the first teases weren’t enough to pique their interest. Major networks have come together for Wooga Squads In the SOOP. Episodes of the show will be accessible on both the JTBC network and Disney+. Despite the fact that both networks will show the same programmes, those who have access to JTBC will have the advantage of seeing them first. Episodes of JTBC will be shown at 9 p.m. KST each night. Two hours later, at 11 p.m. KST, it will be available on Disney+.

In The Soop: Friendcation Teaser

Two teaser trailers for the series were released. As soon as the trailer begins, the whole Wooga Squad has congregated at HYBE’s headquarters.

The video showed the guys relaxing on a beach and posing for a group picture. Disney+ will make it available to subscribers. Additionally, TV Guide adds that the series will be available to watch in Japan, Malaysia, Thailand, Indonesia, and Singapore beginning on July 22.

Nothing pleases Korean netizens more than seeing their favourite stars engage with the pals they’ve grown to adore over the years in the business. The Wooga Squad made up of BTS members V, Park Hyung Sik, Park Seo Joon, Choi Woo Shik, and Peakboy is one of the most recognisable buddy groups in pop culture.

No one could contain their joy when it was revealed that In The Soop: Friendcation will include all five members of the Wooga Squad.

A clip showcasing members travelling through snow and towards the sea before snapping a cute picture has also been posted.

In The Soop: Friendcation Plot

Netizens will be able to see the entire series soon, and it’s already shaping out to be much fun. After BTS announced their partnership with Disney+, it’s possible that it was V who came up with the idea for the show. The army will treasure the front close to their hearts. THE PLOT revolves around the vacation of cast members.

But despite everything being set in motion, the first scene suggests that no one was quite sure what was happening. Amid everyone’s seated astonishment, Peakboy said, “So this is all of a sudden?”  the squad will travel to the gangway for some days and nights. they will explore the vacation with BTS band member V.

As if that weren’t enough of a rush, the party jumped on the ice to cool down. V’s exclamation that he was having a great time wasn’t surprising, as he usually enjoys experiencing life to the fullest. While it may have seemed like a simple case of a group of people having a good time, this was anything but. After the final scene, a caption states that the group will discuss how they first met.

In light of their hectic schedules, it’s not unexpected that the Wooga Squad had a good time reminiscing about their first encounter.

In The Soop: Friendcation, BTS previously shot two seasons of In the Soop. This time around, V and the other group members opted for family-style meals and free time activities instead of a forest theme. The Wooga Squad’s camaraderie extends deep friendship openly cheering for one other and awarding each other.

Fans will finally get to watch the quintet in all their splendour on JTBC and Disney+ starting July 22, 2022, thanks to In The Soop: Friendcation.