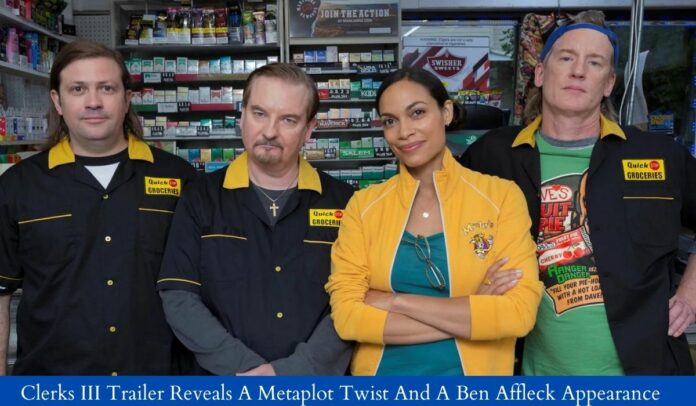 On September 13, Clerk III, the trilogy-capper of Kevin Smith’s iconic semi-autobiographical series, which debuted in 1994, will be released. This marks the return of Kevin Smith to the convenience store where it all began.

The first Clerks III trailer, which has been in the works for more than a decade, debuts today and has Kevin Smith going completely meta for his moving follow-up.

The movie opens up 15 years after Randal and Dante made the decision to purchase the Quick Stop and the nearby video shop in order to reinvigorate their lives, but Randal has just survived a catastrophic heart attack. Randal decides to convince his buddies to help him make a movie about their experiences working at the convenience store after getting a fresh lease on life.

The movie’s newly released first trailer depicts how the director’s personal life would once more converge with that of his New Jersey register jockey. As for Ben Affleck, you better believe he makes an appearance.

Smith has been working toward this goal for about ten years. Back in 2013, the director initially disclosed that he was developing a very different, far darker version of Clerk III.

However, Smith’s public heart attack in 2018 caused that recurrence to be abandoned. Because of that near-death incident, Page 1 of the movie was revised to feature Randall, the Quick Stop clerk who is now invariably humorous (Jeff Anderson).

Eventually decides to continue on his feature filmmaking goals after overcoming a cardiac attack, much to the chagrin of his patient friend Dante (Brian O’Halloran).

After initially intending to debut the first trailer at San Diego Comic-Con, Clerks III production wrapped up in August, but moviegoers are now getting their first look at the movie early.

As Randal develops a film based on his and Dante’s lives, the video provides a glimpse of Kevin Smith‘s emotional and wholly meta sequel. It also reveals the return of several regular collaborators, including Ben Affleck and Justin Long.

The first trailer for Kevin Smith’s eagerly anticipated sequel “Clerks III” reveals a metaplot twist and a Ben Affleck cameo. For “Clerks III,” which features appearances from a number of well-known figures, Smith drew inspiration from his own near-death experience.

The official Clerks III trailer has been made available by Lionsgate with just a few months till the movie’s premiere.

The first Clerks III trailer arrived a little later than Smith first anticipated; the writer, director, and star had hinted that it would do so in May.

Despite the delay, the trailer’s release will undoubtedly be a thrilling look at Smith’s dramatic and meta sequel, in which Randal and Dante recreate a number of key sequences from the original Clerks film while also filming in black-and-white, much as Smith did with his directorial debut.

The Clerks III trailer even makes fun of Smith’s original Clerks ending, in which Dante was shot and killed by a robber and was widely criticized for being too depressing. In this scene, Dante jokes that his death never actually occurred.

Randall plans to produce a movie about working as a clerk, thus Clerk III, with callbacks and numerous appearances, it is a meta-comment on the conception of the original clerks.

Along with Affleck, who portrays one of the New Jersey natives who go to Randall’s version clerk auditions, other well-known actors who have been cast in film roles include Fred Armisen, Sarah Michelle Gellar, and Justin Long.

Capitani Season 2 Release Date, Cast, Review! Will It Be Renewed By Netflix?