In news that came as a shock to all Euphoria fans, Barbie Ferreira,...
HomecelebrityDavid Beckham Net...

One of the most famous faces on the planet for a number of years now, David Robert Joseph Beckham is a former English professional footballer. One area where he particularly stole the show on the football pitch was in any set-piece situations, with Beckham scoring a number of iconic goals with his wand of a right foot.

Since David Beckham’s illustrious playing career, the former Manchester United and Real Madrid star has been involved in a number of businesses and been the face of numerous advertising campaigns thanks to his global appeal. From Australia to Asia to the States, Beckham is an instantly recognizable celebrity.

David Beckham’s net worth is said to be at a staggering $450 million. Aged 46, the retired professional footballer is considered to be one of the best players ever in his position. As a result of his evident talent, Beckham secured numerous moves to big clubs over the years, which enabled him to earn large sums of money while also playing an integral role in the formation of a number of businesses.

Having enjoyed successful spells at major clubs such as Manchester United, Real Madrid, AC Milan, LA Galaxy, and Paris Saint-Germain, as well as turning out for England, Beckham’s wealth is unsurprising and has enabled him to live the high life. For example, in 2010, the New York Times estimated that he had made $190 million in endorsements in his career. Beckham’s status has also led to numerous endorsement deals, replica shirts being sold, and a range of other money-making avenues. Beckham can be seen at red carpet events, on television shows, and he is the type of individual who would enjoy the VIP treatment at a popular casino. His wife, Victoria, is also a high earner after being a member of the Spice Girls and forming her own fashion brand that has managed to achieve success globally.

Born in the Leytonstone area of London on the 2nd of May 1975, David Robert Joseph Beckham is the son of Alan Beckham and Sandra Georgina. Coming from humble beginnings before reaching his level of fame, Beckham’s father worked as a kitchen fitter and his mother was a hairdresser in the local area. David Beckham attended Chase Lane Primary School growing up, before moving to Chingford County High School during his later childhood years. Combining education with his love of football, Beckham joined local side Ridgeway Rovers as a youngster and showcased his football skill immediately. From there, he certainly didn’t look back. 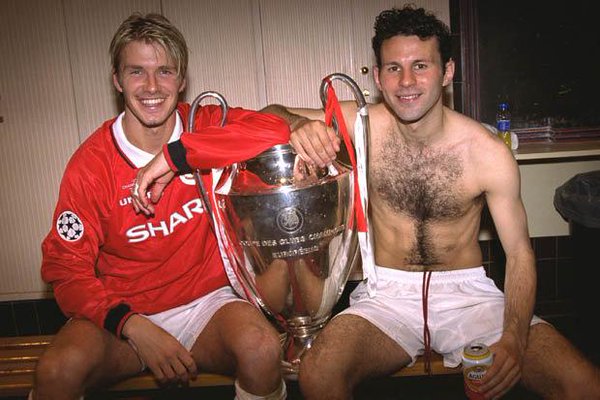 Playing for sides such as the aforementioned Manchester United, Real Madrid, AC Milan, LA Galaxy and Paris Saint-Germain, Beckham was a world-class talent. After helping Manchester United to win the FA Youth Cup, Beckham made his senior debut for the Red Devils in 1992. During a hugely successful time at United, he won the Premier League, the FA Cup, and the UEFA Champions League in his career. Beckham also played for England in the World Cup, as well as turning out in America for LA Galaxy and Italy with AC Milan.

After announcing his retirement from the beautiful game in 2013, Beckham’s love for football has never waned. As a result of his passion for the sport, especially when it comes to growing soccer in America, Beckham’s main focus has been behind the formation of his MLS expansion team that he purchased for $25 million, Inter Miami. As well as being the current president and co-owner of Inter Miami CF, he is also a co-owner of League Two side Salford City.

When thinking of starting a business, choosing a name is probably one of the first things you need to prioritize. Most people think that naming a business is simple and easy. However, it’s much more complicated than that since your...
Sports

There is no doubt that thanks to advancements in technology and the enticing bonuses offered by online casinos, gambling can be a highly thrilling experience. However, there is no shortage of horror stories when it comes to rogue casinos...
Business

Today, the Internet and social media development allow people to create companies that operate solely in the digital sphere. Such businesses depend on online business promotion, while their owners carefully pick where to promote their brand online. Choosing the right...