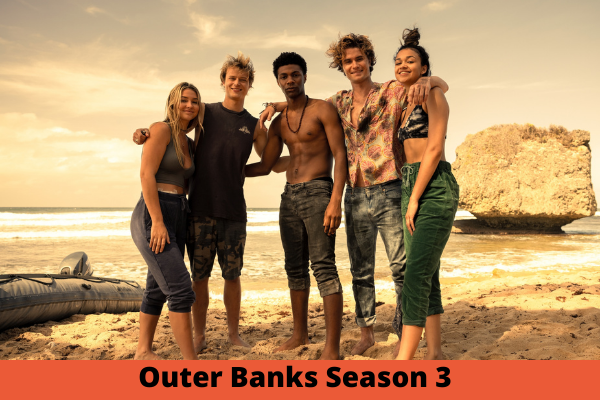 “Outer Banks,” a mystery adolescent drama created by Josh Pate, Jonas Pate, and Shannon Burke, follows a gang of working-class North Carolina teens known as The Pogues. During their investigation into the disappearance of John B’s father, the teens in the episode go on a treasure hunt.

Big John, John B’s father, becomes sucked into the treasure hunt as the Pogues battle a clear economic difference in the area due to the rich summer inhabitants. His son and friends follow suit.

The film ‘Outer Banks,’ which premiered on April 15th, 2020, was well received by reviewers who praised its stunning photography and gripping storyline.

The audience also received the social commentary on the Banks’ economic and cultural inequality. The second season concludes with shocking discoveries and new concerns about Big John’s disappearance.

What do we know about season 3 of Outer Banks as fans are left in a state of disbelief after the season 2 finale?

Netflix has announced the third season of Outer Banks. “From Poguelandia, season three, baby!” the actors of the program said in a video shared on the streaming service’s official Twitter account.

According to our best prediction, Outer Banks season three is expected to be available on Netflix before the end of the year.

Season one premiered on Netflix in April of 2020, while season two followed a year and a half later in July of 2021, a one-year and three-month delay.

Second season filming started in August 2020 and wrapped up in April 2021. The earliest we may see Outer Banks on our televisions is in July 2022, given the eight-month production period and the possibility of delays due to COVID-19.

“Outer Banks” finale is a mind-boggling confrontation that concludes Season 2. For the sake of his family’s safety, Ward tells Sarah that he is still alive and that his death was a ruse.

John B’s buddies accompany Sarah and John B to recover the Cross of St. Dominic from the Camerons. As a result of the ensuing mayhem, the Pogues find themselves stuck on an island. That Big John is still alive and well in Barbados and contact with Carla is one of the most significant revelations of Season 2.

With the Pogues attempting to go back to their treasure search, the program’s third season is set to begin. To recover the gold and cross, they’ll have to face a battle against the Camerons.

With Big John still alive, the treasure quest may take a new path, with the possibility of a team-up with the teenagers. According to the show’s makers, the enigma surrounding the wealth is expected to deepen in the third season.

We may also see a lot more adolescent romance in the story. Josh Pate gave a glimpse of what’s to come in an interview with EW earlier this month. ‘Obviously, we’re conscious of how the fans feel regarding JJ and Ki.’ We wanted to examine the Ki-Pope connection.

We wanted to hint at what was to come for the third season. That surprised us, much as how the public was pulling for JJ and Kiara’s relationship,” Josh added. “We didn’t want to do it quickly, but we want to do it simply because that caught us by surprise.”

It’s safe to say that we can look forward to the Pogues’ third excursion to be just as entertaining as the first two.

Unfortunately, a trailer is out of the question at this point. However, if you bookmark our site, we’ll notify you as soon as we learn more. Guys, you’ll reap the rewards of your patience!