Joey Defrancesco, the munificent Jazz Organist, saxophonist, and trumpeter of America died on...
HomeEntertainmentFriends From College... 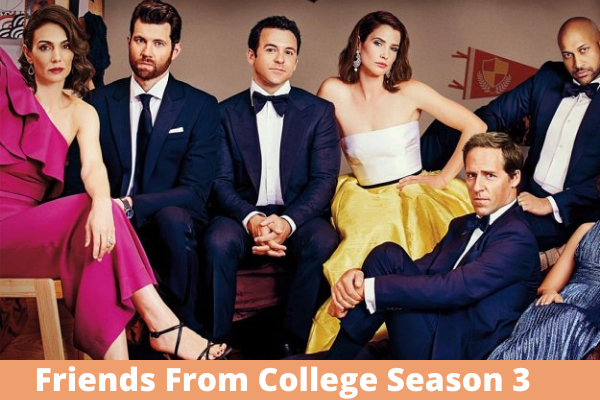 Season 1 of ‘Friends from College’ had a star-studded cast, and despite the show’s lack of quality, many viewers tuned in because of the handy half-hour episode length.

It looks like ‘Friends from College’ has finally run out of luck since fans of the program returned for a second season, which was much more entertaining and sophisticated than season one.

That means there won’t be a third season of Friends from College. Let us investigate this further.

Friends From College – Renewed Or Canceled?

On January 11, 2019, Netflix released the second season of Friends From College.

February 18, 2019, Netflix announced that it would be canceling the program. Announcing the show’s cancellation on Twitter was co-creator Nicholas Stoller, who also used the microblogging site.

As a result of the show’s dismal ratings, Stoller took some time to express his gratitude to those who stuck with it despite its boredom and lack of character development. As a result, Friends From College season 3 may be considered canceled for all practical reasons.

The sitcom centers on a group of close friends from Harvard who are now in their forties and dealing with the challenges of aging. Reunited after a 20-year absence, they find themselves in a sequence of tragicomic escapades, affairs, and attempts to find true love.

‘Friends from College is a lighthearted look at old friendships, ex-lovers, and the problems of integrating adulthood with nostalgia in an interwoven plot.

On the other hand, Friends from College fails to live up to its potential as a well-rounded comedy about the mid-life crisis of close-knit Harvard alums. Critics have panned the program despite its impressive ensemble, calling it boisterous and even cringe-worthy.

A mere 24 percent of the reviewers gave the first season of “Friends from College” Season 1 a positive review on Rotten Tomatoes. Metacritic likewise gave the program a low rating, awarding it 44 out of 100, based on the reviews of 31 critics.

Although each member is nasty in their way, it is difficult to overestimate the group’s lack of appeal. Most reviewers agreed that if they were seated next to you at a restaurant, you’d get up and leave, including Tim Dowling of The Guardian.

“The trouble with the horrible ‘Friends from College’ is not that its fundamental characters are sometimes greedy, misguided, or heartless; that is almost to be anticipated in the darker regions of the key half-hour scene,” Variety writer Maureen Ryan said in her review of the program.

The program fails to develop interesting people worth watching despite their flaws to a large extent.

Season 1 was widely panned by critics, although the program nonetheless managed to attract a fair number of viewers. Season 2 of the sitcom launched in January after a one-and-a-half-year hiatus, thanks to Netflix’s decision to continue the show.

In the year after the events of Season 1, we take up the tale a year later and see how the close-knit group of friends has drifted apart due to their secrets, adultery, and difficult interpersonal connections.

While Season 1 received a lot of flak for its lackluster quality and relatability, Season 2 attempts to make up for it by enhancing the show’s quality and the characters’ relatability.