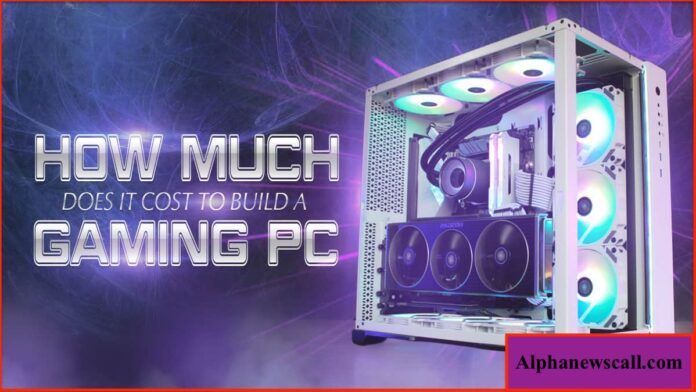 We all know that gaming is an expensive hobby. It’s not just the games, you also have to buy a computer powerful enough to run them at their best settings. But how much does it cost to build a gaming PC? Well, there are many factors involved here – your budget for starters – but generally speaking, one can expect it to be anywhere from to build the best gaming pc under $500 and up. And we’re talking about top-of-the-line equipment! So if you want the most powerful system possible without spending too much money on peripherals like keyboards and mice, then this article should help you out!

What factors determine the cost of a Gaming PC

There are many factors that come into play when trying to determine how much it costs to build a gaming PC. Your budget is naturally going to be one of the most important deciding factors, but there are other things to consider as well. For example, do you want an all-in-one system or will you be building your own custom machine? And what kind of games do you plan on playing? If you’re mostly interested in first-person shooters then you’ll need a very different system than someone who wants to play the latest MMORPGs.

The different types of Gaming PCs and their prices

There are four general types of gaming PCs: budget, mid-range, high-end, and extreme. The prices for each of these systems can vary greatly, but we’ll give you a general idea of what you can expect.

Budget gaming PCs start at around $ 300 and can go up to about $ 700. They typically have a weaker graphics card and less RAM than the other types of gaming PCs, but they’re still capable of playing most games on lower settings.

Mid-range gaming PCs usually cost between $ 700 and $ 1500. They offer more powerful graphics cards and CPUs as well as more RAM than budget gaming PCs. This makes them ideal for gamers who want to play current games on higher settings.

High-end gaming PCs cost anywhere from $ 1500 to $ 2000+. They offer the best performance possible, with top-of-the-line CPUs, GPUs, and tons of RAM. These systems are capable of playing games on very high settings or even maxing them out completely.

Extreme gaming PCs go beyond the $ 2000 mark with stuff like multiple graphics cards, overclocked processors, and ridiculously large amounts of memory. If you have a lot of money to spend then this is where you’ll find the most powerful system possible.

Which type is best for you, based on your budget

The budget PC probably won’t be as good as those from the other types when it comes to frame rate performance but it’s still more than enough for many gamers. It can run modern games pretty well without problems plus it will likely last longer than the other types of Gaming PCs.

The mid-range system is a pretty good choice for most gamers who want a powerful machine without spending too much money on it. It’s better than the budget PC if you want better graphics performance, faster load times, and smoother frame rates. However, it won’t be quite as good as high-end or extreme PCs in this regard.

If you have more money to spend then you should definitely go with a high-end or extreme gaming PC because they offer significantly better performance while still being fairly affordable compared to some other types of computers. The main reason why we don’t recommend going with an extreme machine right away is that their prices are usually only justified if you’re going to use them for professional gaming or other extremely CPU and GPU intensive tasks.

Types of hardware that are essential in a computer system

There are certain pieces of hardware that are essential for any computer, regardless of what it’s being used for. At the very least, you’ll need a motherboard, CPU, RAM, power supply, and a case to put everything in. You’ll also need an operating system such as Windows 10.

However, if you’re looking to build a gaming PC then there are some other components that you’ll want to consider. A powerful graphics card is essential for getting the best gaming performance, so that’s something you’ll definitely want to focus on. Other important things include a fast hard drive, lots of memory (RAM), and a DVD drive instead of a CD drive.

Which hardware you should be spending money on

Your computer’s performance will be determined by the three most important pieces of equipment: the graphics card, CPU, and RAM. These components work together to determine how quickly your games will load and run.

With that said, you should always choose the best hardware within your budget. Don’t try to build a $ 500 computer and then complain about how it’s not as good as something else. There is such a thing as too much money when it comes to building PCs, so just spend what you can afford and don’t waste any more cash unless you really need to.