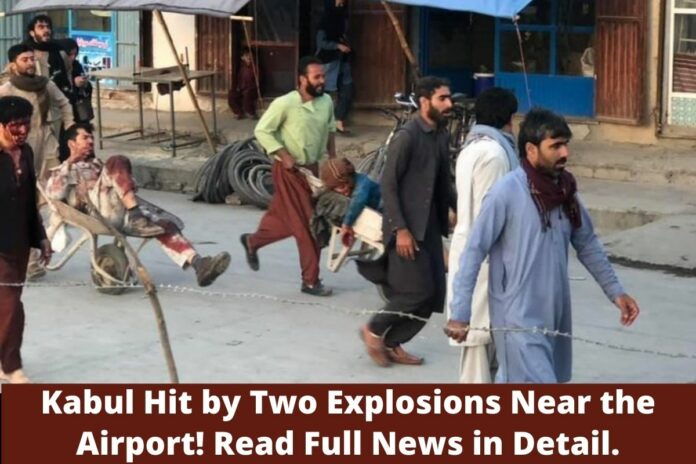 One of the explosions at Hamid Karzai International Airport in Kabul, where the evacuation of the Afghanistan population is underway, occurred at the Abbey gate, where many people were trying to leave the airport and enter the country in a crowd.

According to witnesses, the Taliban, which took power in Afghanistan last week when the United States and its allies withdrew their troops after nearly 20 years of war, fired from the air and used batons to force people to make queues at the airport.

There were multiple reports and tweets of several injured Afghans and reports that a U.S. soldier was wounded in an explosion outside Hamid Karzai International Airport in Kabul, where efforts are underway to evacuate people from Afghanistan.

Few tweets are following regarding this sad news.

Kabul hit by two explosions near the airport, at least 13 die in suicide attack by suspected ISIS terroristshttps://t.co/vj7IJNlvHj

Two explosions have occurred outside the Kabul airport gates, killing many & injuring several Americans. Yesterday the Biden administration was bragging to the media about how successful their departure was. This is a disgrace.

At least 13 people have died in one or more explosions outside Kabul airport, a Taliban official says.

Both American soldiers and Taliban militants are reported to be among the wounded.

On Thursday night, the Pentagon said that one explosion hit an area of Kabul International Airport, where large crowds have gathered in recent days and another outside Baron Hotel.

The area was hit as evacuation flights from Kabul Airport continued to take off, which had warned the Western governments, U.S. officials said.

The explosions occurred hours after the United States and its allies warned of possible terrorist attacks as thousands crowded into the airport in a desperate attempt to flee after the Taliban took power.

One of the explosions occurred in a crowd waiting for the entrance to Kabul airport, which Western governments had previously warned of, said Adam Khan, an Afghan who was waiting outside.

The first attack began as crowds waited for the airport as thousands of people gathered to attempt to leave the country in a massive aerial evacuation since the Taliban seized power earlier this month, Khan said.

The Pentagon confirmed that several explosions occurred at the airport in the Afghan capital Kabul on Thursday, killing several U.S. civilians. On Thursday, two explosions ripped through Afghan crowds at Kabul’s airport, causing several deaths and disrupting the last attempt at a U.S.-led evacuation.

According to Russian officials, two people were killed in an attack at Kabul airport and 15 wounded in one attack. Pentagon spokesman John Kirby said the first attack occurred at the airport’s abbey gate.

Thousands of people gathered to try to leave the country in a massive aerial evacuation after the Taliban seized power earlier this month.

An Italian humanitarian group that runs hospitals in Afghanistan stated they treated six patients with gunshot injuries at the airport. At least seven Afghans died in a mass panic of about a thousand people.

In recent days, thousands of people gathered at the airport – both American civilians and Afghans – to ask for evacuation flights from the U.S. military before leaving Afghanistan on 31 August.

The Taliban have fired warning shots and used batons in recent weeks to control crowds in the swollen airport, where a day earlier, seven Afghans died in a panicked onslaught of thousands but did not make any comments.

Pentagon Says There Were Two Explosions In Kabul

Two airport bombings on Thursday claimed an unspecified number of civilian casualties in the United States, creating a bloody and chaotic picture as U.S. forces and allied forces tried to evacuate people from the Afghan capital.

The U.S. military said on Monday that no American or NATO coalition troops were injured in a brief firefight that broke out at one of the airport gates. Soldiers were helping to evacuate Western citizens and vulnerable Afghan nationals.

Two suicide bombers and a gunman targeted a crowd at Kabul Hamid Karzai International Airport that had gathered for a massive airlift in recent days brought thousands of people fleeing a Taliban takeover of the country Thursday.

President Joe Biden said on Sunday, the United States is steadfast in its commitment to get U.S. citizens and vulnerable Afghans out of Afghanistan after thousands of desperate escape attempts to the airport repelled by Taliban fighters.

Secretary of State Antony Blinken said Wednesday that he warned Americans to avoid airport gates overnight in defense of national security as the breakneck evacuations continued.

Biden is considering a deadline for Britain to tell citizens to avoid Kabul, citing a high threat of terrorist attacks. On Wednesday, 1,500 Americans remained in the country waiting to evacuate.

The White House said Thursday that 13,400 people evacuated from Kabul International Airport in the last 24 hours. It brings the total number since the Taliban retook the capital to 95,700.

In the past 24 hours, the Pentagon has flown 13,400 people out of Hamid Karzai International Airport in Kabul, officials said Thursday. It is a sharp decline from the last few days when the Middle East’s reception centers were filling up.

The United States and other countries, including Britain, have sent several thousand troops to help evacuate vulnerable foreign citizens and Afghans from Kabul. Still, they have been careful to avoid clashes with the Taliban.