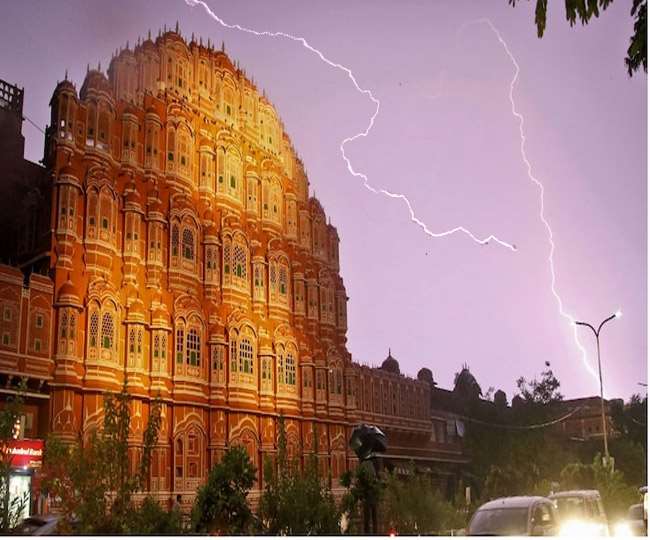 Many people have lost their lives due to lightning in many states of the country on Sunday. PM Modi has expressed his condolences to them. Lightning is a natural phenomenon. But it can also be fatal.

New Delhi: Lightning is considered quite common during rain. But this common thing often kills people. On Sunday, people lost their lives due to this in some other states, including Rajasthan, Jharkhand, West Bengal, Uttar Pradesh. According to the correspondent of Alpha News Call, 23 people died in the state in Rajasthan. There 28 were injured. Governor Kalraj Mishra, including PM Narendra Modi, has expressed condolences to the dead. About 16 people have died in Jaipur itself due to lightning. Of these, 11 died on the watchtower built at Amer Fort in Jaipur when these people were taking selfies here.

PM Modi’s condolences on the accident

About 35 people were present here at the time of the accident. Due to the lightning, many people jumped and fell down the hill. The government has run a rescue mission here. The injured have been admitted to various hospitals. Only a few of these are said to be in critical condition. PM Narendra Modi has expressed his condolences to those killed in these incidents. In one of his tweets, he has written that ‘Many people have lost their lives due to lightning in some areas of Rajasthan. This has hurt a lot. I express my deepest condolences to the families of the deceased.

why does lightning flash

Such phenomena are seen almost everywhere on earth. That is why it is important to know why this happens. Let us tell you that during the rainy days, clouds are often seen moving in the sky. When these clouds collide with the clouds coming from the opposite direction, the water droplets present in them get charged, and energy is generated directly towards the earth. Because of this, many times, we hear the loud sound of lightning.