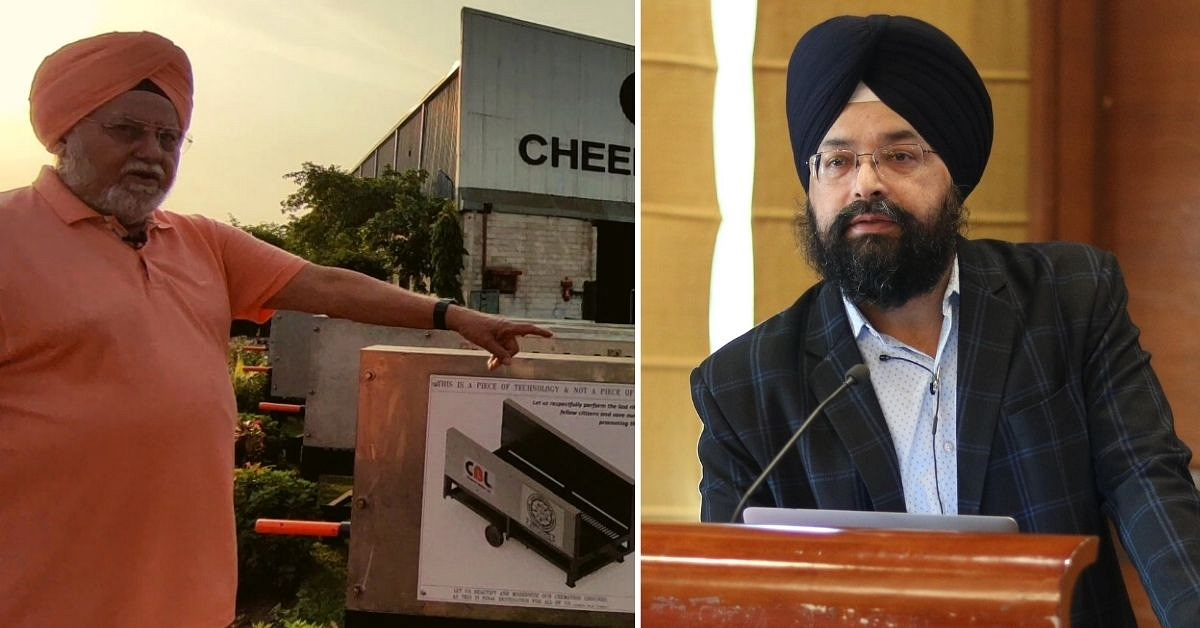 ‘Noble Cause’, a cart-shaped eco-friendly crematorium, is fitted with wheels. It can be taken anywhere as per the need. The system has been developed by Harjinder Singh Cheema, Chairman, Cheema Boilers Limited, with the help of IIT Ropar.

Since the beginning of the year 2020, India is facing the brunt of the Corona pandemic. The lives of crores of people have been affected due to this pandemic. Someone’s job was snatched away, someone’s life. But the biggest irony is that many people did not even get a respectful funeral after leaving the world. There was a time in the middle when people were not coming forward for the last rites of those who died of the corona; then, people could not get a place in the crematorium.

“I saw in the news how people are throwing dead bodies in the water. Then saw the news that a good-hearted person from Delhi is performing the last rites of people who died of the corona. But there came a time that he had to perform the last rites of people in the parks because the place was not available in the cremation ground. Then I thought whether we could devise a system for this,” says Harjinder Singh Cheema. Harjinder Singh is the chairman of Cheema Boilers Limited, a Mohali based company.

He said that through his company, he makes ‘boilers’ for big industries. But due to the corona pandemic, seeing the bad condition of the people, he felt that he should do something for society. So he decided to create a new system for cremation. First of all, he understood the problems with the method used for burial in general. After that, he worked on his technique. He says that he got full help from IIT Ropar for this work.

The crematorium built by 72-year-old Harjinder Singh for the funeral; he named it – ‘Noble Cause’. For this, he got technical support from IIT Ropar. Harjinder Singh explains, “First of all, we decided that we will make such a system, which is eco-friendly and which can be taken anywhere according to the need. We got the inspiration to build this crematorium from the ‘wick stoves‘, which is smokeless. We have used ‘stainless steel’ to make the crematorium, and it has been made so that it can be cremated in a short time.

They started work on this technology in April 2021 and, with the help of IIT Ropar, completed the job by May 2021.

The ‘Noble Cause’ is a cart-shaped crematorium with wheels. It can be taken anywhere as per the need. Dr Harpreet Singh, Professor, IIT Ropar, says, “It takes less time to burn the dead body. Also, much less wood is needed than usual, as the steel plates on both sides do not allow heat loss. There is also a tray at the bottom in which the ashes are collected.

Harjinder Singh says that people are still hesitant to use electric crematoriums. In such a situation, ‘Noble Cause’ can solve their problems. The best part is that it can be taken anywhere. “It can be easily used by rotary clubs, temples, gurudwaras etc. Wherever there is a shortage of space, it can be used to bid farewell to loved ones,” he said.

After this technique was ready, first, a crematorium was installed at the cremation ground in Mohali. This crematorium here has got a good response. Ramratan, the servitor of the cremation ground, says that he was given this crematorium for cremation by the Cheema Boiler Company. But after use, it was found that it is much better than the usual way. During the Corona period, so many funerals were taking place that pollution also started increasing. But when cremated in this (noble cause), the wood burns completely, and the smoke comes out to a minimum. Also, it takes about four quintals of wood to perform the funeral typically, but it takes only two and a half quintals.

Ramratan said that it usually takes about six hours to complete the funeral. But it gets done within three to four hours. If the deceased person’s family members want, they can come on the same day and pick flowers and take away the ashes. This innovation is very effective in the time of the corona epidemic. Because people are not getting a place to perform the last rites of the dead body, you can respectfully bid farewell to your loved ones in such a situation by placing ‘Noble Cause’ anywhere in the open space.

Harjinder Singh says that he has built ten such crematoriums. One has been given to IIT Ropar, and others have been sent to Patna Municipality and Gurugram Municipality. Recently, Chandigarh Municipality has also contacted him.

Harjinder Singh, who did Marine Engineering, worked for about 12 years and started his own company in 1990. He says that his journey has not been easy, but he has always made his ideas a reality. Initially, he used to repair only boilers, but in 1999 he also started manufacturing boilers for the industry. Today the boilers made by his company go to other countries as well. A few years back, his company tied up with IIT Ropar for technical collaboration. Since then, he has been working closely with IIT Ropar on different technologies.