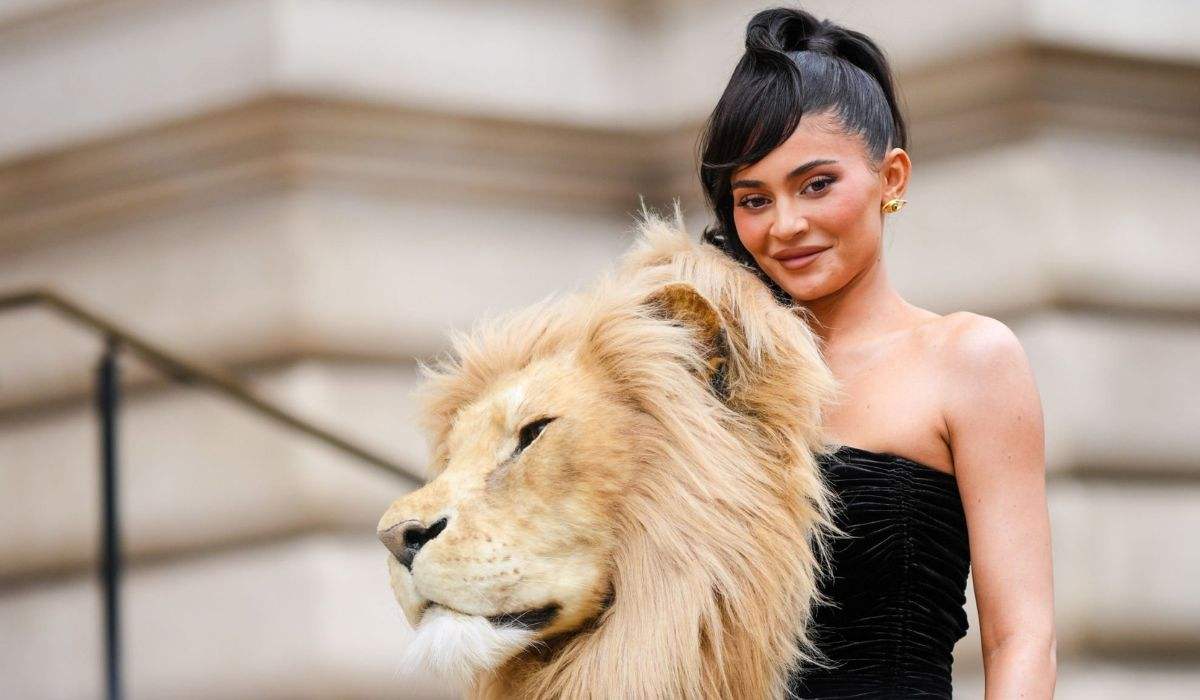 Kylie Jenner is not a stranger when it comes to new trends and fashion. Being a prolific American personality and businesswoman, she does not fail to make her fans intrigued. So recently her appearance at Paris Fashion week was quite the topic of discussion as she had a life-sized lion’s head attached to her gleaming black dress that made everyone’s jaw-dropped. Let us have a wide look into this interesting new style of Kylie Jenner.

Kylie Jenner arrived at the star-studded Schiaparelli show on Monday, and the whole stars just turned their heads to see the beauty icon in her astounding look as she walked the red carpet.

Some of us have not heard of this Paris Fashion Week that is currently taking place, and each show would see nuanced styles of renowned personalities from all over the universe in their trendiest and most elegant and ostentatious attire.

So when it comes to Kylie Jenner she just met all the criteria of the show by taking such a massive fashion step none have ever tried. When we closely analyze her look, she appeared in a gleaming timeless black strapless velvet ensemble that enhanced her beauty inexplicably.

The most interestingly intimidating feature was the replica of a life-sized head of the lion that was pinned across her torso. She completed her massively trendiest look with a pair of bold, gold shoes with toe marks and with a snakeskin bag.

After the event, Kylie Jenner decided to take her new dashing look to her Instagram handle and shared these photos with the caption “Beauty and the Beast”. She wore her lion headdress as a token of honor and she celebrated this huge event and shared “No animals were harmed in making this look”.

Her sleek ponytail and her subtle but undeniably glamorous makeup look made her even more drop-dead gorgeous. Kylie Jenner thanked Daniel Rose Berry for pulling such a dashing look for her and she was truly happy about it.

As enrapturing Kylie Jenner looked in her dashing look at the event, many appreciated her for taking a different move in fashion and dress sense. But many of her fans did not take it in the same way as she or others in the event did.

Social media hit with numerous backlashes and claimed that the lion head really promotes trophy hunting and that her look really intends that. Many of the social media users, raved about how illogical this look is and how badly it interprets. One of the users claimed that this is her worst fashion mistake in her entire life and many of them with similar opinions flocked to the comment section.

One of the most liked comments of a user was, “The only thing this is glorifying is killing these animals, even if this is fake. The lion, cheetah, and wolf seem like they are meant to look as if they were killed and used for clothing. How is this celebrating the glory of the natural world? Make it make sense”.

Many users of social media critically viewed her new look as utterly disappointing and they raved vociferously about how badly it promotes animal cruelty. Be it a fashion event or what, hanging animals’ heads and figures really creates a misinterpretation.

As we all know Kylie Jenner is one of the most high-profile and sensational television personalities with hordes of fans across the globe. She is a prolific businesswoman and her Kylie Cosmetics is one of the top-notch and highly expensive cosmetic products.

Kylie Jenner is the mother of two kids that she shares with Travis Scott. The duo’s relationship is indeed a whirlwind of public on-again and off-again ones. She became a mother to her sweet daughter in 2018. After that, it was recently that she revealed her son’s name and photographs.

Within a matter of minutes, her son’s photo and the name went viral on the internet. So she was in the spotlight for quite some time and her recent look just had a severe backlash over social media beyond what she anticipated.

When we dig deeper into these sorts of interesting appearances Kylie Jenner was not the first one to try this. Other models walked through the red carpet wearing other animal faces attached to their attire at the Schiaparelli show. For example, Naomi Campbell wore a wolf’s head perched on her shoulders in a furry black trench coat with a furry black hat.

Irina Shayk’s dress was really intimidatingly stunning as she wore a snow leopard’s head embellished into the bodice of Shalom Harlow’s leopard print dress. So Kylie Jenner is not the one who stylized in a way that really screwed up the netizens.