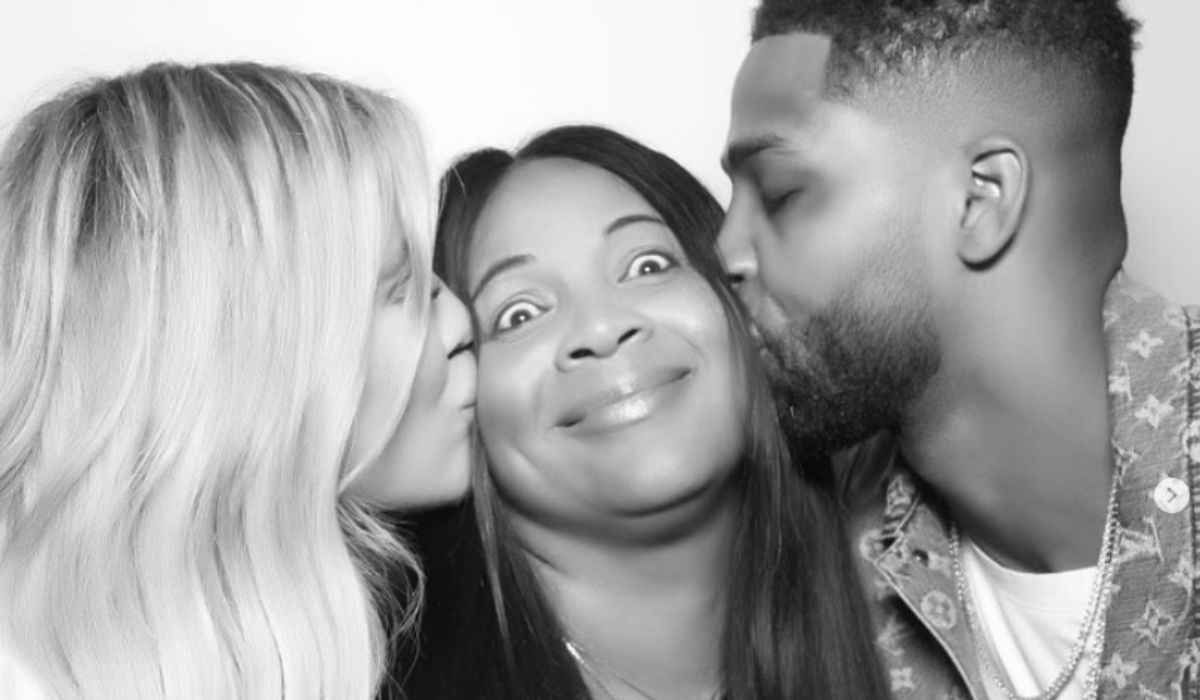 Khloe Kardashian pays soul-crushing tribute to Tristan Thompson’s late mother Andrea. She was deeply saddened to hear about the unexpected death of Andrea. As we all know Tristan Thompson’s mother died due to a heart attack earlier in January and it was really a piece of disheartening news many paid tributes to the Canadian American- professional basketball player’s mother.

It was on Tuesday, that the renowned American television personality shared a tribute to her ex-boyfriend’s mother Andrea Brook. Khloe Kardashian posted a series of photos as well as videos of the late Andrea Brook that fondly captured moments and golden memories with Tristan Thompson’s mother.

Khloe Kardashian was actually trying harder to garner the strength and courage to finally make it to her Instagram to share how profoundly sad she was by the death of Andrea Brooks. She was inexplicably finding it hard to say goodbye to Andrea and it was one of her toughest times to cope with.

Khloe Kardashian with a deep perforated heart wrote: “I have been avoiding this, avoiding accepting this is real. I have so much to say but nothing at all. I have so many emotions and still, I feel numb. Life can be brutally unfair at times in so many of our lives. But at the same time, I feel blessed that I am lucky to have had someone that makes saying goodbye so incredibly difficult. I am choosing not to say goodbye for good because that is something I cannot fathom. Goodbyes for good are something I don’t believe in. I KNOW I will see you again. I know I will hear your sweet voice and infectious laugh again. I know I will get to feel that embrace of yours.

I will see you again with the many that have gone before you that I so desperately miss, love, and cherish. So I am choosing to say, that until I see you again in Heaven, I miss you and I will continue to miss you more and more every single day. I know you are with our Lord and Saviour. I know you are rejoicing up there. Dancing and singing and probably yelling who does that!!’ because we are crying at your loss”

Khloe Kardashian knew how much Andrea loved her sons and she even commented about how unlikely it was for you to leave your boys here. And as she stated, her sons will live with leaden hearts for eternity as their loss is unfathomable.

Khloe further added that she will be looking out for Amari, the youngest son of Andrea and her other boys Daniel, Deshawn, and Triston would be guided by the guardian angel to protect them.

Tristan Thompson shares a Daughter named True and a five-month-year-old son with Khloe Kardashian. It was in the 2021-2022 season that Tristan played in the NBA for the Chicago Bulls. Later after he decided to part ways, with the team Triston Thompson has been remaining as a free agent and played for the Sacramento Kings and the Boston Celtics, previously.

As per sources, Andrea suffered a cardiac arrest when she was at her home and was rushed to the hospital for immediate treatment, but medical science failed miserably to save her and she took an unexpected heavenly earthly departure that left his sons and other friends and relatives in a deep pit of agony and despair.

Khloe Kardashian stated that she will stand by Tristan Thomspon during his most difficult time as they co-parent their daughter True and their son they welcomed via surrogate.

Over the course of years, Tristan Thompson has shown his ardent love and respect for his mother through his social media he even posted a Mother’s day wish, and each of his words really pleased everyone who saw the post.

It was back in 2016 that the Canadian-American basketball player and the most astounding American television personality started dating. It actually did not take much time to switch into a serious relationship. It was in December 2016 that Tristan and Khloe celebrated Thanksgiving and New Year’s Eve together. And people were so thrilled to see the pair enjoying their life.

On 2017, January 11, Khloe Kardashian publicly said she is enamored with Tristan and they are really hoping for a good life together.  Tristan joined Khloe on the show Keeping up With Kardashians and their public appearances really made their fans so overwhelmed.

After dating for quite months, Khloe Kardashian divulged that she is ready to marry him and have children with him. Khloe Kardashian never tried to conceal how serious she was about Tristan Thompson. She had implicit faith in him and was all ready to be parents. So it was in September 2017, that the pair announced the arrival of their first child. After welcoming their daughter, back in 2018, it was rumored that Tristan had been cheating on Khloe Kardashian this scandal really put a toll on their lives and friction started to brew up.