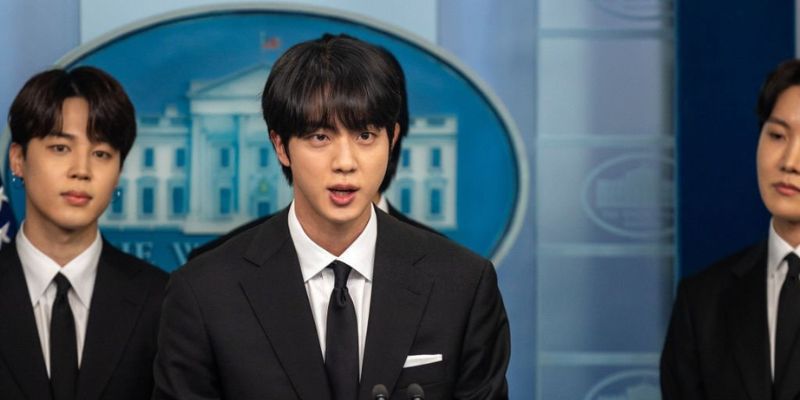 Today Jin Joined the 5th Division’s boot camp in Cheongsan-myeon gun, Gyeonggi-do at around 1 pm on 13 December, all the other BTS members were with him bidding him an emotional farewell.

After Hybe Entertainment initially announced that BTS “World Wide Handsome” Jin will soon join the military, fans across the globe have been distraught. With his cute smile and handsome face, the star has requested the fans to wait for him while he is gone to perform his military service. His latest single, The Astronaut, is a special song to all Army across the globe.

Recently Hybe again took to their social media page to request the fans to not visit the enlistment site, as a commotion may disturb the star as well as the others who are enlisting the same day. For the same reason, the day and time of Jin’s enlistment will be kept a secret from the public.

Bts jin took to his Weverse account to show off his buzz cut, meaning the star will join the military service shortly and today finally the day has come, Jin posted on his Wevesre that The photo of Jin has gone viral as fans were eagerly waiting to see the star in his military look.

Are the fans ready to let them go? Army’s around the world have taken to their social media to promise their favourite star that they will eagerly wait for his comeback, everyone is sending his wishes and prayers.

Below is the full official statement released by Hybe Entertainment to the fans and public:

We are informing you regarding BTS Jin’s military enlistment.

Jin will be enlisting in the army as an active-duty soldier to fulfill his military duty. As we have announced before, there is no separate official event on the day of admission to the recruit training center.

On the day of, the site is expected to be very crowded with enlisting soldiers, family members, and some fans. We ask the media to please refrain from visiting the site.

In order to prevent safety accidents caused by on-site congestion, Jin will enter the grounds of the recruit training center while in a vehicle without greeting the media or fans separately. Due to the nature of the venue, we ask for your understanding that there is no separate waiting space for reporters.

The agency will not spare its efforts and continued support until the day Jin fulfills his military service duties and returns in good health.

Here Are Some Fun Facts About Kim Seok-Jin

After the huge speculation rounds about BTS military enlistment, the fans have finally got their answers.

According to sources, Jin will be followed by Suga who will probably enlist by March next year.RM and Jhope may enlist together and finally be followed by Jimin, V, and Jungkook.

All 7 members will complete their mandatory service and meet their fans by the end of 2025.

If you love The Ellen Show then you cannot miss "tWitch", everybody's all-time favorite DJ who entertained the masses over the years has committed suicide. The news is shocking to his fans as he is one of the best...
movie

Speaking of K- dramas that can flutter your heart, the list is long, but today I chose to talk about “The Descendents Of The Sun”. Cult favorite, classic, and call whatnot. Honestly, the drama is pure gold and words...