Joey Defrancesco, the munificent Jazz Organist, saxophonist, and trumpeter of America died on...
HomeNewsMbappe Poses With... 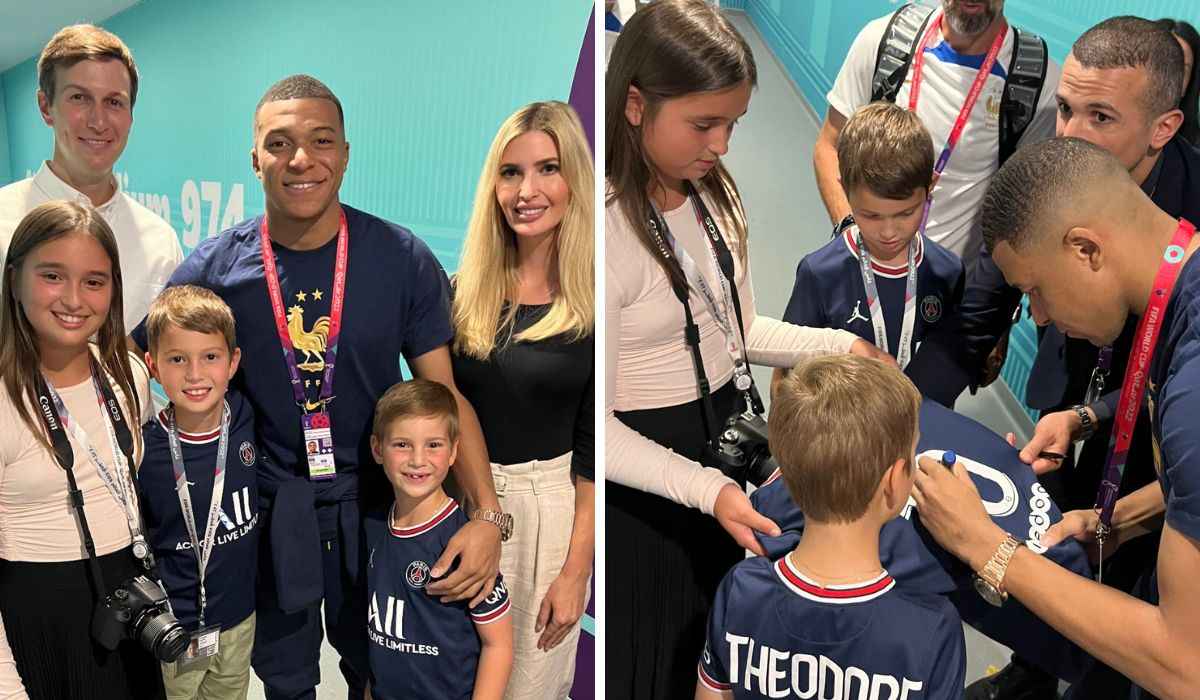 On Saturday, Nov. 26, Kylian Mbappe and his team wound up the game with their impressive performance and he clicked a decent picture with the former president’s daughter, Ivanka Trump, husband Jared Kushner, and their three little children. According to various reports, Trump’s daughter is currently in Qatar along with her entire family for the incredible soccer tournament.

Ivanka took a string of photos posing with the prestigious footballer on her Instagram. In a particular post, Ivanka praised the 23-year-old Frenchman, saying he was both “kind,’ and “talented.” In a picture, Mbappe was seen signing on a jersey for the Trump-Kushner family.

The former first daughter and her family were previously spotted on Thursday, during Brazil’s opening match with Serbia and she was also seen cheering for Cristiano Ronaldo in the match of Portugal vs Ghana. They were seen sitting side by side with Khalid bin Khalifa bin Abdulaziz Al Thani, Qatar’s Prime Minister. Meanwhile, Kushner was also seen laughing with Paris Saint-Germain president Nasser Al-Khelaifi. It is believed that he likely arranged the meeting for the Trump-Kushner family with Mbappe.

Ivanka has recently announced that she will no longer participate in politics amid Trump’s declaring his bid for a presidential run in 2024. Considering her retirement statement and Jared’s involvement to make peace in the Middle East, it is feasible that the Qatar Prime Minister might have personally invited them to see the match.

Kylian Mbappe has been already making headlines and setting the internet on fire with a short clip going viral where he was showcasing his incredible piece of skill during his last game with Denmark. Fans have been pouring with comments and wonder how a skilled player like Mbappe is being as down to earth as possible. With his talent, he could have been conceited.

Paris Saint-Germain international Mbappe produced a grand performance for his team on Saturday, defeating their nemesis Denmark. France recorded 2-1 against them, eventually leading France to the knock-out stages of the World Cup 2022.

Initially, Denmark and France were at a draw, but Mbappe proved to be the match-winner later. With someone like Mbappe as a teammate, there will apparently be no worries. He is currently preparing himself to lead the French team for a second straight World Cup.

Regardless of the result of their last game with Tunisia, Mbappe and his team will play in the knockout next Wednesday for the French national team. Meanwhile, Tunisia is already out of the 2022 World Cup as they lost their first pair of games. And, any result they end up with would bring no change to the decision.

Fans who have been following Mbappe since his career began, would know that he has almost all the qualities like skill and pace scoring prowess that are essential for a fine player. Apparently, Mbappe has matched Pele’s record for scoring the most World Cup goals before being 24 years old. In fact, Mbappe still has an entire World Cup to dethrone Pele.

No other player in the World Cup is creating such a massive impact on the viewers other than Mbappe. Recently, Manchester United’s Bruno Fernandes matched with the France ace by contributing multiple goals.

With three goals, two wins, and straightly leading the team to the knockout, Mbappe is literally on the seventh cloud. With a victory in history, France is once again getting ready to hold the World Cup. the incredible football player is expected to leave the club in 2023. And apparently, being a member of Real Madrid seems to remain a dream.

Very recently, the former PSG manager Mauricio Pochettino has professed that he has eventually become a better coach after training the football behemoths like Lionel Messi, Neymar Jr., and Kylian Mbappe. While Mbappe and Neymar were already learning under Pochettino, Messi on the other hand, left Barcelona and joined Pochettino.

When asked about the experience he has while training the three big players, Pocherttino said that it was far from what the world imagines, saying things were different in the room, away from the chaos and the three were humble. He further mentioned that all they ever looked for was space and they all needed to approach it differently.