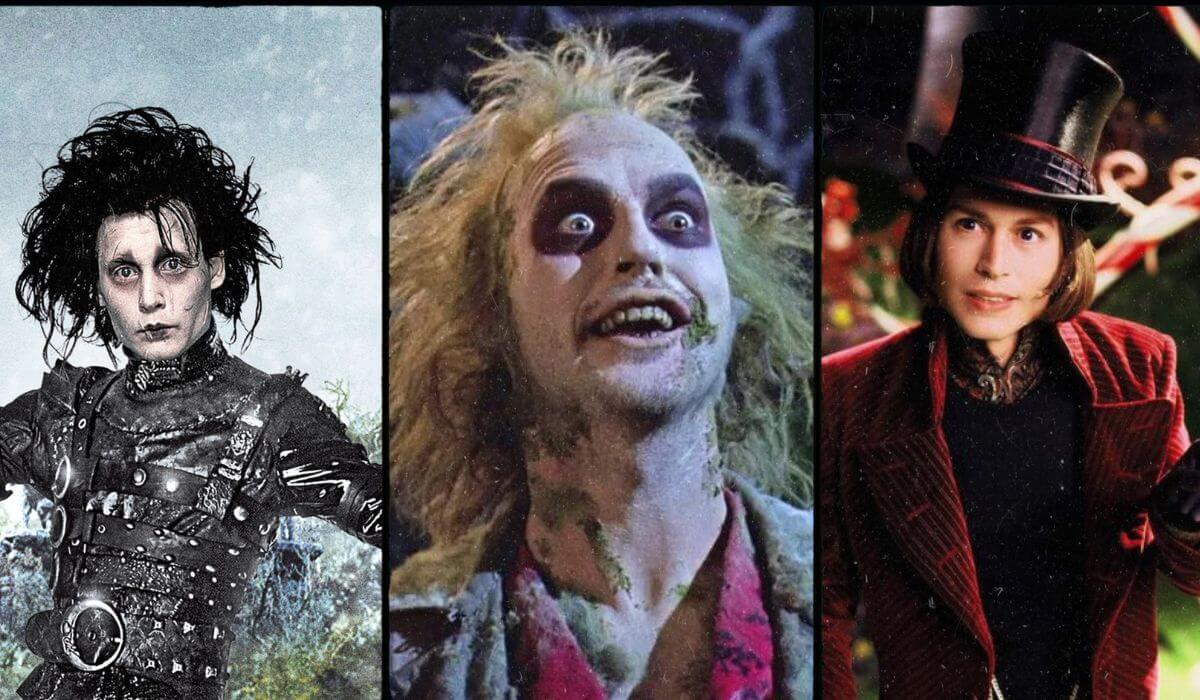 Hollywood has not seen another iconic filmmaker and director like Tim Burton, who has created a series of eccentric characters that populate his macabre movies,  in its history so far. In fact, Burton is better known for his films that are based on their characters in their entirety. Don’t you know Buton’s films that are named after his characters?

What is even more interesting is that Tim Burton characters have his personal features. He is famed for his unique directing style and the presence of elements like fantasy and gothic horror in his movies.

Unavoidably, his movies are more personal, with Tim Burton characters reflecting either himself or the individuals around him. Until today, the tycoon has worked with a number of superstars in Hollywood like Winona Rider, Johnny Depp, and Michael Keaton. they all have contributed their best in playing certain Burton characters on the big screen as well.

From Beetlejuice to Batman to Frankenweenie to Chocolate Factory, Tim Burton characters in the movies are all our favorites, and so are Tim Burton’s Best movies characters.

His many quirky creations have made it nearly impossible to rank them. However, we have got a hard job done for you. So, without further ado, let’s dig into the top 10 best Tim Burton characters, ranked.

10. Willy Wonka In Charlie And The Chocolate Factory

Although Gene Wilder played Willie Wonka in the original adaptation of Roald Dahl’s children’s book, it was Johnny Depp, who reprised the role in Tim Burton’s remake. Both Wonkas are unavoidably different from one another, but the audience accepted the two in their entirety.

Tim Burton managed to add elements of a gothic visual style to a family movie about a trip to the chocolate factory, with the lead character being beyond quirky.

9. The Penguin In Batman Returns

With Robert Pattinson’s solo DCEU movie being the talk of the street, fans have been debating on whether he can dethrone Danny DeVito or not. Let us be honest here, in our personal opinion, only DeVito himself can portray the role as best as Penguin in Batman Returns.

Only he has that look to play Oswald Cobblepot in its entirety. The penguin was one such character that clearly quenched the thirst of Burton fans when released as it had that melancholic visual representation of Burton movies.

8. The Headless Horseman In Sleepy Hollow

Originally, the movie was planned to be directed by Sleepy Hollow as a run-of-the-mill slasher film. But when Burton entered the scene, the entire talk was changed. The flick got eventually ballooned into a sumptuous multi-million movie, presenting gothic romance.

Inspired by Washington Irving’s “The Legend of Sleepy Hollow,” Tim Burton’s film was something that has the potential to place itself with the original short story. The character of the headless horseman played by both Ray Park and Christopher Walken still is irreplaceable to the viewers.

Just like what the name suggests, the movie is all about a barber who slit people’s throats, bakes their flesh, makes a pie out of it, and ultimately serves the pie to the public. Speaking of the present, it is not that hard to make a musical movie work. But, back then, if anyone was daring enough to walk that line, it was the one and only Tim Burton.

He was confident enough to adapt the Stephen Sondheim musical while bringing his own flair to it. But, the effort would have gone in vain, if the titular character himself was badly represented. Fortunately, Johnny Depp was able to beautifully play the role of Mr. Todd, the cold-hearted murderer.

With the end of the director’s relationship with Bonham Carter, Tim Burton was left in search of a new muse and got himself landed before the talented Eva Green. With the mystique and dark charm, Green was absolutely the finest choice to portray a Tim Birton character and she clearly relished her part as well.

Tim Burton’s FranenWeenie was a flick that didn’t make a huge splash at the box office but was quite fun to watch. The 1984 animated stop-motion movie was different from the usual spooky flick he directed and because the viewers were not adaptive to changes, it failed to receive tremendous attention.

The movie was nothing but a simple take on the Frankenstein story with a boy bringing his pet dog Sparky,  back to life. And technically speaking it’s the boy who is the lead character in the flick and is definitely one of the best characters born from the masterminds of Tim Burton.

4. The Joker In Batman

While there is no question about Heath Ledger’s Joker being the best in the franchise, Jack Nicholson’s iteration from the 1989’s Burton-directed movie Batman is a close second. However, that doesn’t mean Mr. J was anything short of phenomenal. Moreover, it was this version that went in-depth into the history of the character who turned pale white, like a clown makeup, when his face came in contact with some kind of bleaching agent. While the film had a different intention from the movie, Nicholson’s Joker ended up stealing the entire show.

From laughing a burst of iconic laughter at his own appearance in the mirror to dancing in the pale moonlight, Nicholson’s Joker has a series of iconic moments that have created fans all around the globe.

It is also a matter of fact that his character looked most like the character presented in the comic book version.

Must Read Who is Tim Burton Wife Lena Gieseke? Everthing You Need To Know

So, when we shortlist the top 3 best Tim Burton characters, we cannot sit there still without mentioning the character Edward Scissorhands. As we said earlier, Burton owns credits for a number of films, of which the character name itself holds distinct fame.

The film Edward Scissorhands might be the director’s quirkiest film of all time. Besides, it is also one of the emotional works of Burton. Usually, people might judge an appearance like that of Edward in the movie- a pale-skinned man with long and messy hair and blades for fingers- as a monster, but Burton gave it a very unique touch that urged viewers to feel sorry for the character.

He presents the character as a helpless creature who was unintentionally born with scissors sticking out of his hands. In short, Edward is coupled with a frightening appearance and an innocent demeanor.

2. Jack Skellington in The Nightmare Before Christmas

Apparently, you must be wondering why Jack Skellington is ranked second or even mentioned in the list as he is born from the iconic Tim Burton Characters, as that credit completely goes to director Henry Selick. However, Burton did work on the plot and also served as a producer for the flick, so it’s pretty fair to call Jack Skellington a Tim Burton character.

Jake Skelligton is an incredible antihero- better known as the “Pumpkin King” of spooky Halloween Town. Although the story of the movie is quite adorable, it still manages to instill fear within the viewers. Moreover, Jack Skellington itself is a character that is born to fascinate with the macabre as well.

Isn’t it pretty weird to consider a parasitic ghoul who takes glee in tormenting the recently dead a likable character? Yes, we know it is. But we have no other choice rather than ranking Michael Keaton as the best Burton character.

The reason why we have chosen Betelguese over Jim Carrey or Robin Williams is pure because of Michael Keaton’s ability in walking the fine line between wacky and nuanced to deliver an absurd character without making the viewers annoyed. Plus, the costume designers have done an incredible job and as far as his makeup is concerned, we are speechless. The audience was delivered with a character that can never ever be forgotten. And, it is a matter of fact that the 1998 classic Beetlejuice turned Tim Burton into a label in the industry, cementing a legacy in Hollywood.

The hilarious yet terrifying character of Betelguise was an epic one in the 80s and still reigning over other spooky characters.