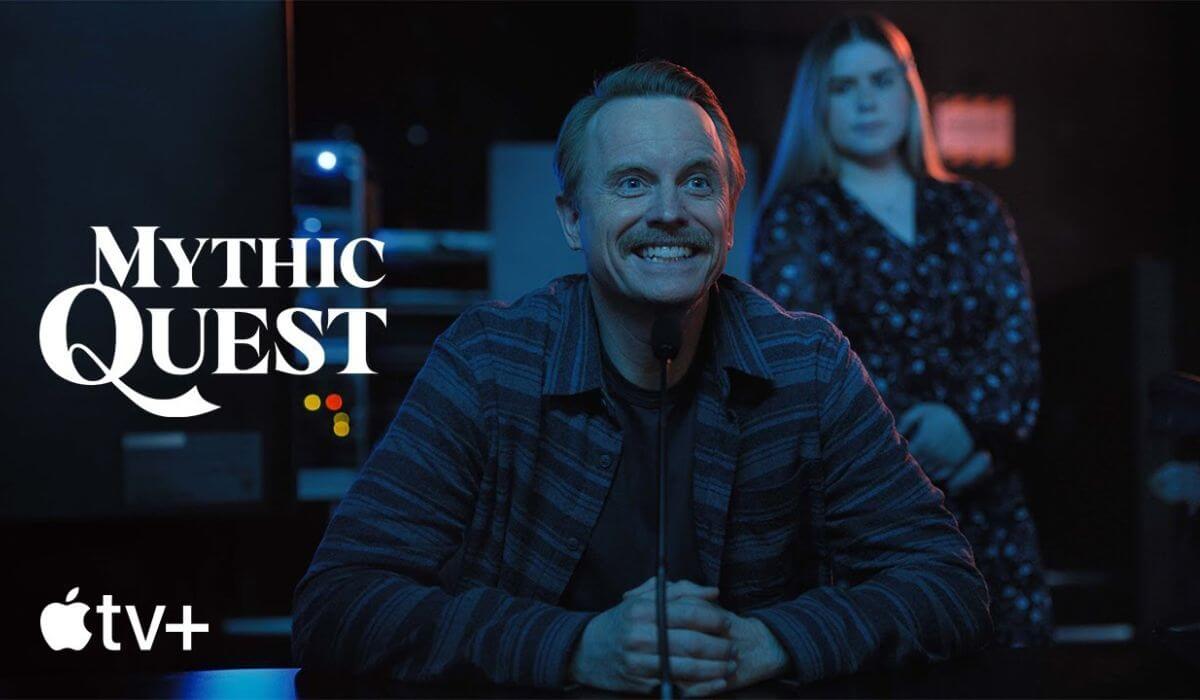 Mythic Quest is an American television series exploring the genres of comedy and drama. The show was previously also called Mythic Quest: Raven’s Banquet for season one. Mythic Quest season 3 release date is November 11, 2022. The show is set to be released on the online streaming platform Apple Tv plus.

The United States is the country of origin with English as its original language. The production companies involved with this incredibly famous series are RCG Productions, 3 Arts Entertainment, Ubisoft Film & Television, and Lionsgate Television.

Also, the show will be following a weekly release pattern just like the series’ previous seasons and the finale episode is set to be released on January 6, 2023.

Mythic Quest season 3 release date is November 11, 2022. The show is set to be released on the online streaming platform Apple Tv plus. It is also expected that once after the series’ official release it will also be available to stream on other online streaming websites as well, but no official information has been released by the makers of the show.

What Will Mythic Quest Season 3 Plot Be About?

Mythic Quest season 3 plot will revolve around a bunch of video game builders who will be seen building some amazing video game worlds, shaping up new heroes, and forming new thrilling and exciting legends.

The real drama associated with these game developers will be displayed in their real-life offices but not in their video games. The upcoming season 3 will also be featuring Ian and Poppy navigating their way through the hardships and challenges coming their way in their newly formed partnership at the GrimPop studios.

The show will witness David acquiring his new role as the boss and Jo will be coming back as his loyal and diligent assistant. The upcoming season will be filled with comedy and drama, it will be an extension of the series’ main plot.

Where To Watch Mythic Quest Season 3?

Mythic quest season 3 will be available to watch on the online streaming platform Apple Tv Plus. As of now, no information has been revealed by the makers of the series about its release on any other streaming service except Apple Tv Plus but hopefully the show will be releasing its episodes on other sites as well. The audience can watch the episodes of the previously released season one and two on Apple Tv plus.

Mythic Quest season 3 cast will be the same as that of the show’s previous seasons. The main cast members that will be reprising their roles for the upcoming season 3 include:

The guest members of the previous seasons include

The Talk On Social Media About Mythic Quest Season 3

Fans are readily excited for the upcoming season three of Mythic Quest. The released trailer and information look very promising and have created a buzz all over the internet.

The official Twitter handle of Apple tv plus named as @AppleTvPlus recently posted a tweet reading “How does a janitor rise to power? er? Maybe he does not…A new season of #MythicQuest returns November 11 on Apple TV+” followed by a short fifty-five-second-long teaser of the upcoming season three.

Many other Tweets and posts regarding Mythic Quest’s season three have been trending all over social media.

What To Expect From Mythic Quest Season 3?

Mythic Quest season 3 will witness the show’s main characters reprising their roles. It is expected that more drama and comedy will be the central theme of the upcoming season three. A few of the main events that will be witnessed by the audience will be David returning to play his newly acquired role of being a boss, he will find himself in charge and will be seen working a lot.

Talking about return, Jo will also be returning as David’s loyal assistant. Carol will be seen trying to navigate her way through after her promotion. Poppy and Ian will be figuring out their new partnership at GrimPop Studios. It is expected that the show will take off from season two ending and will also be addressing a few cliffhanging incidents from season two.

Mythic Quest season 3 complete episode guide has not yet been revealed by the makers of the show. The series will be officially released on the online streaming platform Apple Tv Plus. It is expected that the show will not be dropping all its episodes in just one single go, it will be following a weekly release pattern.

t is expected that it will have a total of ten episodes with each episode having an average run length of about twenty-four minutes to thirty-seven minutes.

The first episode will be released on November 11,2022 and the show will conclude with its last season finale on January 6, 2023. Also, the series is primarily made in English Language, but it will also be available in other dubbed versions as well.

Mythic Quest season 3 trailer was released by Apple Tv on October 11, 2022. The one-minute and fifty-five-second-long trailer display the show’s main characters returning for another fun season. The people working at the studio were seen clapping at the introduction of a potential Masterpiece named “Hera”.

The characters were seen in their full energetic mode and the trailer also introduced a newly added employee, who was shown in handcuffs. There were some comical references as well. The trailer hinted that the upcoming season is going to be an epic showdown.