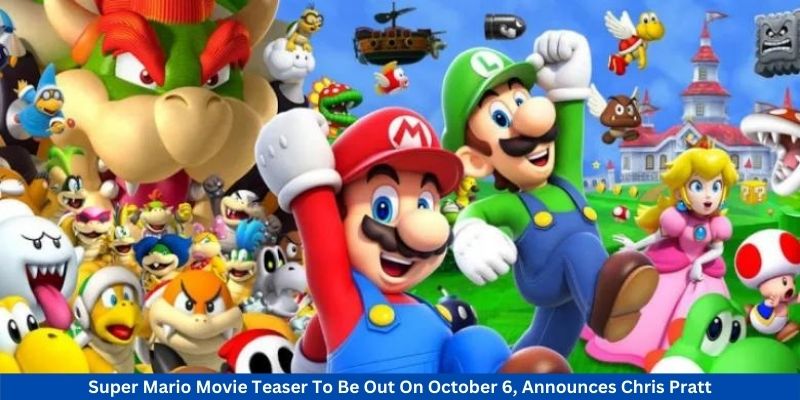 With all the hype it deserves, the Untitled Super Mario movie based on the ever-favorite game Super Mario is all set to release its teaser trailer on October 6 Thursday. Being such an iconic game and a very fond memory of an era, the movie had made headlines since its official announcement.

The all-new animated Super Mario movie was announced in September 2021 by Nintendo, the Japanese-based multinational video game company that developed the game Super Mario and Illumination, which is an American animation studio that was founded in 2007. The release of the official teaser trailer was announced by Chris Pratt who is to be the sound of Mario in the movie. Chris’s tweet about the news quoted “This one is VERY special. Cannot wait!!! Get ready to be blown away.” It is to be hoped that the teaser trailer will also be well received by the fans just as they did the teaser poster.

Earlier this month, a teaser poster was released by Nintendo regarding the movie. The poster went viral instantly as the poster was done exceptionally well and it lived up to the expectations of the Super Mario fans out there. The poster featured Mario and the very colorful elements of the Mushroom Kingdom which do complete justice to the game. The center of attraction of the poster is Mario with his iconic plumber suit, hair, and red hat.

The detailing done on him is outstanding, with the proportion he is familiar to us. In the poster, Mario is shown facing a palace that is placed on top of a hill. The palace belongs to Princess Peach. The poster also shows a slightly ‘upgraded version’ of the Toads with much better-looking pants and even with teeth! The poster also features an important element -the pipes! There are green, red, blue, and yellow pipes that are eye-catching and vibrant. If the movie ensures the same quality that they put forward in the poster, there is no doubt in saying that the movie will be a huge hit at the box office.

Super Mario Bros was developed by the Japanese video game company Nintendo for Nintendo Entertainment System. The game which was developed from the simple arcade game Mario Bros helped launch one of gaming’s most successful franchises. The game takes us on the adventure of the two main characters Mario and Luigi. Mario and Luigi are two Italian plumbers who try to rescue Princess Peach from the evil King Bowser.

The event takes place in the Mushroom Kingdom. The game is based on many side-scrolling levels with different types of enemies trying to stop us from rescuing the princess. There are many enemies or obstacles in the game like the Goombas which are enemies that almost resemble a mushroom and Koopa Troopas, which are evil turtles. The main villain of the game Bowser has many imposters all along. The game is only finished when the real Bowser is defeated and the Princess is rescued.

Must Read Who is Black Panther in Wakanda Forever? Is it Shuri?

A movie titled ‘Super Mario Bros: The Movie’ in 1993. The movie was also based on Nintendo’s game Super Mario. It was directed by husband and wife team Rocky Morton and Annabel Jankel. Despite the popularity of the game, the movie did not do well at the box office. The expectations were not met and the movie ended up on several lists of worst movies ever made. Nintendo being ready to offer the game and its characters for a movie once more is a sign of hope for movie and game lovers as it ensures a  certain quality that can be expected, considering their previous experience but still as soon as the cast for the movie was made public, there was an instant dissatisfaction from the fans.

As the news of Chris Pratt being the sound of Mario surfaced fans were skeptical about the choice. The main concern for this was the iconic Italian accent of Mario. Chris Pratt, though a successful and popular actor, is of American origin. Fans are concerned about how Chris will showcase his accent and do justice to the character.

Chris Pratt is an American actor who rose to fame through the character Andy Dwyer which he played in the NBC sitcom ‘Parks and Recreation.’ But Chris owes the popularity and stardom that he enjoys today to the character ‘Star-Lord’ which he plays in different films of the Marvel Cinematic Universe and the character Owen Grady which he played in the Jurassic World film franchise. As Chris Pratt fills in for the voice of Mario, Anna Taylor-Joy will be the voice of Princess Peach. With Charlie Day for Luigi, Jackson Black for Bowser, Seth Rogan for Donkey Kong, and Keegan-Michael Key for Toads, the movie is all set to satisfy the anticipated fans all over the world.