Joey Defrancesco, the munificent Jazz Organist, saxophonist, and trumpeter of America died on...
HomeNewsWho Is Christine... 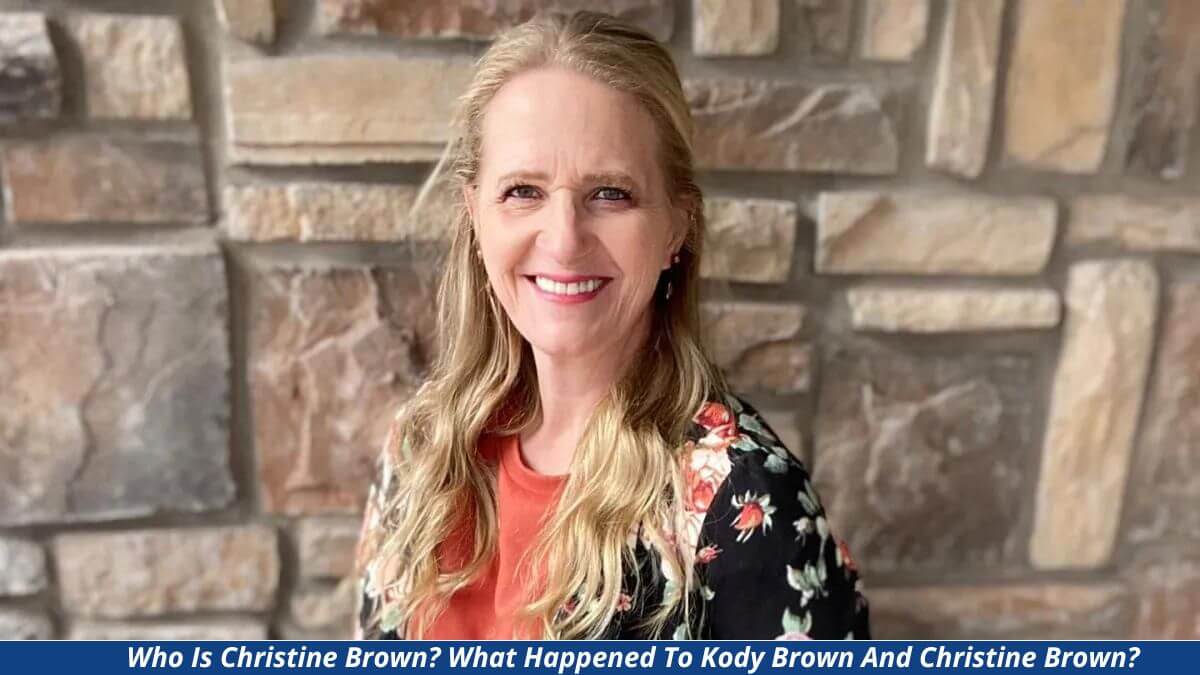 Since 2010, the viewers of “Sister Wives” have been setting unique standards for what a marriage is, exclusively from the ups and downs of Kody Brown’s plural marriage. Four is finally going to be three!

Christine Brown, one of the sister wives, has ultimately taken the biggest step in walking out of her wedlock with Kody Brown and has sent the internet into a frenzy.

Why did the split leave the street talking for a long time? Are Kody Brown and Christian Brown too famous? Let us dig deeper into these but before, don’t you want to know who Christine Brown is? How about we have a discussion on that first?

Who Is Christine Brown?

Needless to mention TLC’s incredible reality TV show, Sister Wives, for it has succeeded in garnering much attention ever since the crowd favorite show premiered in 2010. Christine Brown is extremely popular for appearing in Sister Wives, which depicted her life with her husband, Kody Brown, and his three other wives.

Among the four wives, Christine comes third as Kody Brown tied the knot with Christine Brown after he married his two other wives. In other words, Mr.Brown also invited another wife into his life after Christine herself.

How Did Kody Brown And Christine Brown Meet?

Christine who grew up in a polygamous household met Kody Brown in 1990 and they could easily get connected with each other. Though it took 4 years for Kody to pop the question, he managed to pull it on valentines day of 1994. Following the romantic proposal, Christine and Kody tied the knot later that year.

Today, the couple together has 6 children- Truly, Ysabel, Gwendolyn, Mykelti, Aspyn, and Paedon.

What Happened To Kody Brown And Christine Brown?

After more than 25 years together, Christine Brown is all ready to embark on the difficult decision which will part the couple forever. The TLC star revealed the hot news via Instagram in late 2021, just before the premiere of Sister Wives Season 16.

“After more than 25 years, I have made the difficult decision to leave Kody. we will still have a strong presence in each other’s lives as we will continue to co-parent our beautiful children,” Christine said at the time.

As a response, Kody came to the limelight on Instagram, quoting,

“I am sad that Christine has finally decided to leave. We cherished many years together and I respect and admire her a lot. Although our paths are going to be different, we will stay committed to our children.”

In 1994, when Kody was initially offered the marriage, she accepted it not only because she had to live with Kody, but also because she was solely interested in a plural marriage and that Christine was looking forward to the whole family.

“I wanted sister wives more than a husband in my life. I want a family rather than just Kody,” she said. That way, she was happy and proud at the same time to be a third of someone and not the first.

“I didn’t have to be a first wife, because I didn’t want a guy to be married to me. And then, I didn’t want to be second either because that would make me feel like becoming a wedge, and I didn’t like to be a wedge. In short, I only wanted to be the third, which was the simplest among all,” Christine disclosed during a confessional Scene in the show.

Although Christine had everything sorted with the first and second wives of her husband, it was never at all a struggle for her. But the story was different with Robyn Brown, the fourth wife of Kody Brown, whom he married in 2010.

“There were times when I was like, You can’t leave your family and me. You are replacing your family with Robyn and her children. It was necessarily hard although I happened to realize at one point that it was supposed to happen eventually, I again made it complicated for me.”

Now, after a couple of decades, the Sister Wives is currently chronicling the breakup of Christine and Kody, who is presently living with Janelle Brown and Robyn Brown. Apparently, the 53-year-old is neither living with Meri Brown, one of his wives, from the multiple marriages.

Why Are Christine Brown And Kody Brown Getting Split?

Now back for its 17th season, the show is taking the viewers into the former duo’s marital woes. Certain glimpses have also been extracted, which is capable tio shedding some light on why Christine is leaving Kody, her long-time beau.

With a major stress on the couple’s intimacy issues, the new season started to focus on Christine and Kody, while discussing where things went wrong for them.

At one point, the viewers began to expect a split when Christine announced that she was not any more interested in getting into intimacy with Kody, who had previously hinted about the same.

Apparently, Christine thinks Kody is more favoring his fourth wife, Robyn, than anyone else. “That’s just what it is about. I think Kody has a favorite wife, which is why things are turning out this way,” Christine said, referring to Robyn.

Kody on the other hand, claims as a sister wife, Christine has also not tried her part to get along with his other wives.

“You have never tried to maintain a healthy relationship with others and that’s the reason why I am pissed off.”

But Christine was, however, hell-bent on proving her side of the story, asserting their love was on the edge when she was pregnant with their young child, back in 2010. Well, coming back to Kody, he has a different view on the situation.

After being done with the rumors, Kody decided to give up on fixing his relationship with Christine, plus when he heard about the whole break-up thing from his children, he also became less inclined to solve their intimacy issues.

Are Christine Brown And Kody Brown Together?

The pair eventually had a split after which Christine appears to be quite happy. In August 2022, Christine confronted the media where she reportedly admitted being “happier” after leaving the marriage.

In the same interview, she also revealed that she had developed a second thought on Polygamy in 2018, making her question if that was really something for her.

Christine admitted, “I eventually realized that I really didn’t want to live in polygamy anymore. I didn’t prefer being less important or sharing my husband.”

Where Is Christine Brown Now?

Following the breakup, Christine chose to move to Salt Lake City with Truly, and ostensibly she is open to dating.

“I would love to date again. I love the idea of having a loving partner in the end. But when I asked  about it to Truely she went like, ‘ Mom, I like our lives the way it is.’ And now, I am just going to leave everything up to my fate,” she added.