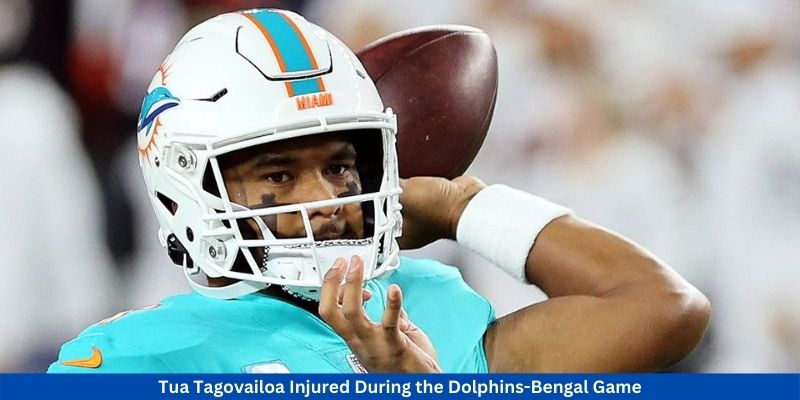 Tua Tagovailoa one of the best quarterback players of the Miami Dolphins has met with an unexpected tragedy at Paycor Stadium and he is taken to the hospital on Thursday night with severe head and neck injuries. Tua Tagovailoa with his perspicacity and shrewdness was playing against the Cincinnati Bengals and all of a sudden things turned pretty nasty when Tua Tagovailoa collapsed by slamming his head and back to the ground causing head and back injuries.

Tua Tagovailoa Suffers an Injury Against the Bengals

Being such an amazing player, this incident crushed the soul of his fans across the globe, and those who were at the event seeing Tua Togovailoa collapsing were flabbergasted.

Everyone was waiting for the Dolphins to tell about Tua Tagovailoa’s condition and after much anticipation, the Dolphins stated that he regained consciousness and had movements in all his extremities. Soon after the game, the Dolphins announced that Tua Tagovailoa would be discharged from the hospital as his injuries are not fatal in any of the diagnoses and he will travel back to Miami with his support team.

During the team’s win over the Buffalo Bills on Sunday, this unexpected incident really bothered everyone who was present there at the spot, and at halftime, after he hit his head on the ground Tua Tagovailoa underwent concussion evaluations. After the hit, Tua Tagovailoa stumbled while desperately trying to return to the huddle. Because of this stumbling and his weird actions, the team initially listed he would be having a severe head injury. But after the diagnosis, they realized that it was really the back injury that caused him to stumble.

Tua Tagovialos’s quick and fervent return to the game made the NFL Association team a bit skeptical and the NFL Players Association requested a review in order to check the NFL’s concussion protocols.

After this sudden hit on Tua Tagovailoa media hovered the team by asking several questions regarding his present condition and about the stance of the team and the NFLPA stated that “ Player health and safety is at the core of the union’s mission. Our concern tonight is for Tua Tagovailoa and we hope for a full and speedy recovery. Our investigation into the potential protocol violation is ongoing”.

After these incidents, players were quite bewildered about their health, and Dolphins outstanding coach Mike McDaniel vehemently stated that his beloved players’ health is the prominent thing according to him and as a coach and as an individual he doesn’t take the health conditions of his players’ lightly. Moreover, he added that his team would strongly comply with any review or investigation that would be put forth by the association and he sincerely felt copacetic with the whole process.

Must Read Marilyn Monroe Net Worth: Who Inherited Her Wealth After She Died?

Tua Tagovailoa is one of the outstanding players of his time and an unexpected injury has caused his pace and stability. But having a strong resilience power Tua Tagovailoa came back with power. Mike McDaniel said to the media about his stance about this incident and the NFL’’s Players associations request for the review “ The one thing I think our players know more than anybody, there are certain things that I am very sensitive to. I have been called emotional from time to time, and one of those things is player health. So I don’t mess around with that at all. They went through the protocols and in that process during the game, and it was something that we wouldn’t have moved forward in the direction we did, had there been any sort of red flags because that’s- you can’t keep quarterbacks out of harm’s way so you wouldn’t- if he had a head issue, he wouldn’t have been back out here”.

After this injury and when Tua Tagovailoa was taken to the hospital, Teddy Bridgewater entered Tua Tagovailoa’s place and superbly finished 14-for-23 for 193 yards. The incident was at Paycor stadium and players of players from the team were befuddled when Tua Tagovialoa was suffering from excruciating injuries.

Tua Tagovailoa is an outstanding and deadly talented American football quarterback playing for the Maryland Terrapins. Tua Tagovailoa was an amazing player and he always harbored a strong passion for sports rather than for any other fields. Beginning with his college Tua Tagovailoa spent his freshman season at Alabama. In 2019 Tua Tagovailoa backed his older brother and started to play football. Though he at first never record any stats, later with a power play, Tua Tagovailoa completed his first career pass for a gain of twenty yards. Tua Tagovailoa with his immeasurably capability holds the Maryland single-season school records for completions and passing yards.