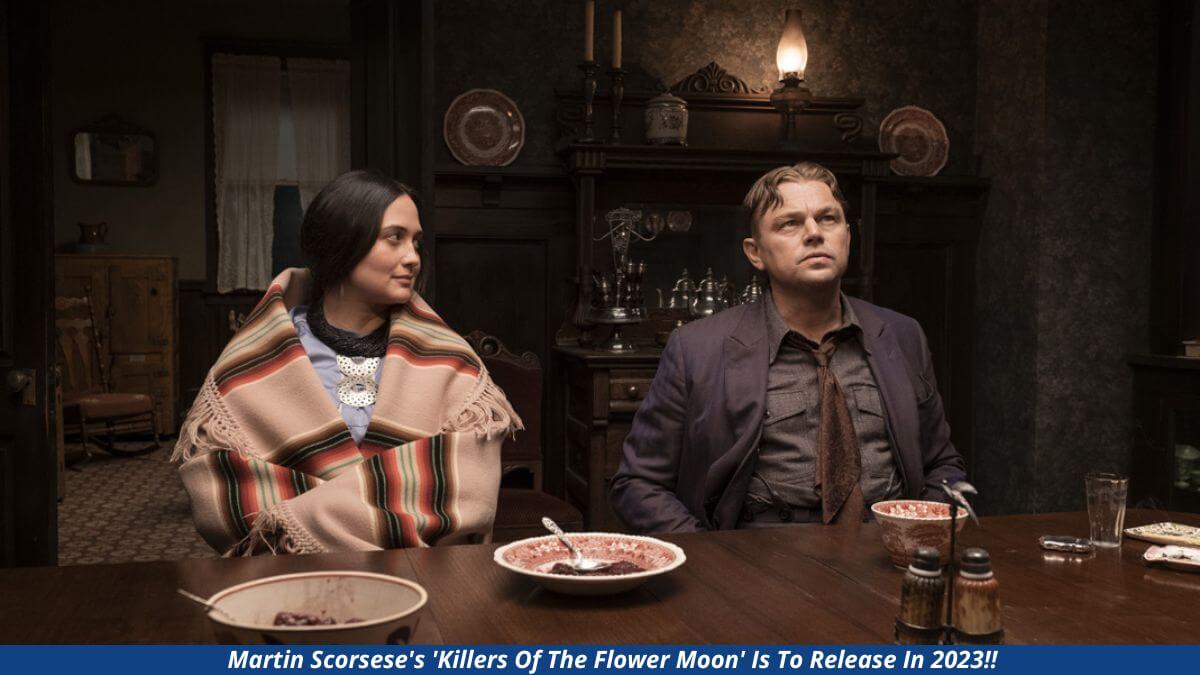 Further in this article, we will get to know more about the Killers of the Flower Moon plot, release date, cast, trailer, where it will be streamed, spoilers, and more.

When Will Killers Of The Flower Moon Movie Be Released?

The director of the upcoming film titled Killers of the Flower Moon is Martin Scorsese and as mentioned earlier it is the adaption of the book with the same title that was written by the American Journalist David Grann. Among the producers of the film is Leonardo DiCaprio who also happens to have a role in the film.

The production companies of the movie are Apple Studios, Imperative Entertainment, and Sikelia Productions. The film is going to be distributed by Apple TV Plus and Paramount Pictures. Killers of the Flower Moon release date has not been officially set yet but the movie is expected to make its premiere at the Cannes Film Festival in the month of May 2023. The movie is expected to have a theatrical release around the same time.

The upcoming film Killers of the Flower Moon was initially going to be released in November 2022 but there was no confirmation of the same. As of now, the film is expected to make its premiere at the Cannes Film Festival which is going to take place in the month of May 2023.

The intention behind the murders was found to be greed and power. Killers of the Flower Moon spoilers have hinted at the film is full of betrayal, murder, greed, and more. The storyline is inspired by a very famous non-fiction book that received a lot of positive reviews and appreciation from the readers.

What Is The Killers Of The Flower Moon Storyline?

As mentioned earlier, the Killers of the Flower Moon plot is going to revolve around the mysterious murders of the Osage Tribe that took place in Oklahoma.

The Osage Indian Tribe was given the privilege to profit from the oil deposits that were discovered on their land. The tribe benefited greatly from this right and became one of the wealthiest tribes in the world during the late 19th century.

A lot of money often leads to problems and people getting jealous, so much so that stoop extremely low. The federal government appointed guardians to assist the tribe with their financial matters. In the year 1921, under mysterious circumstances, a wealthy Osage woman was found dead in the woods.

This was just the beginning of the gruesome murders of the tribe members. A total of 60 wealthy members were murdered in the next 4 years up until 1925. This led to the involvement of the FBI and secrets were revealed.

Where will Killers of the Flower Moon be released?

Killers of the Flower Moon streaming is expected to primarily take place at the Cannes Film Festival after which it will have a theatrical release. The audience will be able to watch this film in the theatres for a limited period and later it will be released on the famous streaming platform Apple TV Plus since Apple Studios is also one of the movie’s production companies.

Along with Apple TV Plus, the film is also being distributed by Paramount Pictures so it is also possible that the film will be available on the streaming platform Paramount Plus as well. The genres associated with this upcoming film are western drama, crime, history, mystery, and thriller. The storyline is promising and based on true events.

Cast and Crew Behind Killers of the Flower Moon?

The Killers of the Flower Moon cast includes a bunch of talented and promising actors that are listed below.

Social Media Message About Killers Of The Flower Moon

The upcoming film Killers of the Flower Moon has already managed to attract a large audience and has created hype. The film has several pages dedicated to it on social media that are keeping the audience updated with news related to the upcoming movie.

The audience took to social media to express that they are extremely excited about this movie since they absolutely loved the book. The avid readers are hoping that the film does justice to the book. The audience has also appreciated the star cast of the film and is expecting to be thoroughly entertained.

The film has created buzz and is even expected to be so good that it might be up for an Oscar. The book which is the inspiration for the film is a very popular non-fiction book that kept the readers on edge and hence they are keen to see how well the movie is going to adapt the book.

What To Expect From  Killers Of The Flower Moon?

Leonardo DiCaprio and Robert De Niro are two of the industry’s most famous actors. The two will be seen in the upcoming film which is titled Killers of the Flower Moon and it is only fair that the audience expects great things from the film.

The film is inspired by true events that took place in the late 19th century and the book with the same title as the film did a fairly good job in giving the details of the gruesome Osage Tribe murders.

We can expect the film to explore themes of jealousy, betrayal, murder, crimes, racism, and more. The film will include violence as well since it surrounds the murders of the tribe and there will be grit and suspense throughout the film which will keep the audience captivated and entertained.

Is There A Trailer For Killers Of The Flower Moon?

Killers of the Flower Moon trailer has not been officially released yet and is expected to release once the film has an official release date set. A concept trailer and fan-made trailer are given below which gives us information about what the movie is based on.