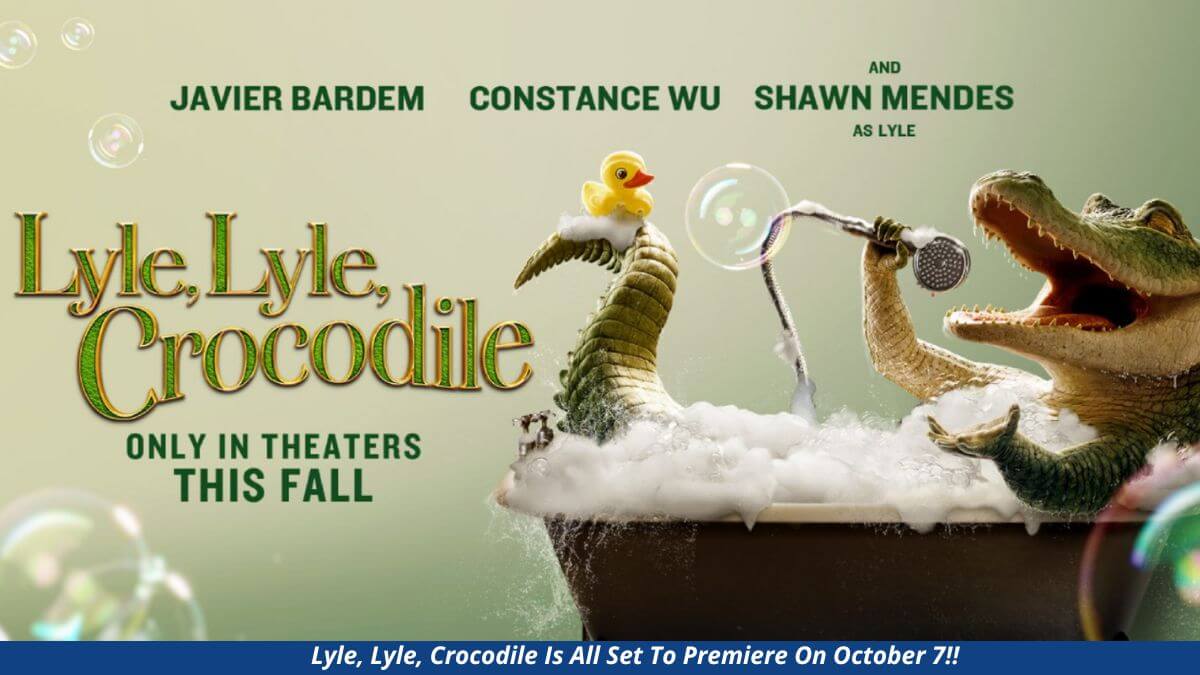 Lyle, Lyle, Crocodile is a forthcoming American live-action/animated musical comedy film directed by Will Speck and Josh Gordon based on William Davies’ script. It is based on Bernard Waber’s children’s story of the same name and its precursor The House on East 88th Street. Shawn Mendes plays the eponymous role in the film, which also stars Javier Bardem, Constance Wu, Winslow Fegley, Scoot McNairy, and Brett Gelman.

Lyle, Lyle, Crocodile is directed by Speck and Gordon, who is well known for earlier films such as The Switch and Office Christmas Party. William Davies, the creator of popular comedic titles such as the Johnny English series, How to Train Your Dragon, and Puss in Boots, wrote the screenplay for the musical.

Move over, felines and canines: Lyle the crocodile is the next home pet that everyone wants. Lyle, Lyle, Crocodile is a much-anticipated live-action/animated musical comedy film based on Bernard Waber’s 1965 children’s book. In the film, a singing crocodile lives in New York City.

It follows Josh, a little child, and his bond with Lyle, a one-of-a-kind crocodile that lives in his attic. But when their wicked neighbour threatens Lyle’s presence, Mr. Grumps, Josh, and his family will have to find a way to safeguard Lyle, who has become a member of their family.

Will Speck and Josh Gordon direct and produce the film, which also includes Hutch Parker, Kevin K. Vafi, Dan Wilson, Robert J. Dohrmann, Benj Pasek, Justin Paul, Tarak BenAmmar, and Andy Mitchell as executive producers. Check out our comprehensive guide to the trailer, release date, narrative, cast and characters, and all we know so far about Lyle, Lyle, Crocodile, and prepare for a musical spectacular like no other. Columbia Pictures will distribute it in the United States on October 7, 2022, through Sony Pictures Releasing.

Lyle, Lyle, Crocodile was supposed to premiere in July 2022, but it was pushed out to November. Columbia Pictures eventually slated it for distribution in cinemas across the United States on October 7, 2022.

When the Primms (Constance Wu, Scoot McNairy, and Winslow Fegley) relocate to New York City, their little son Josh struggles to adjust to his new school and classmates.

All of that changes when he meets Lyle, a singing crocodile (Shawn Mendes) who lives in the attic of his new home and likes baths, caviar, and fine music.

When an evil neighbour, Mr. Grumps (Brett Gelman), threatens Lyle’s life, the Primms must band together with Lyle’s charismatic owner, Hector P. Valenti (Javier Bardem), to show the world that family can come from the most unexpected places and that there’s nothing wrong with a big singing crocodile with an even bigger personality.

Where To Watch Lyle, Lyle, Crocodile?

Based on the best-selling children’s book, the animated and live-action film follows Lyle, a friendly crocodile. Lyle, who lives in New York City, assists and entertains the Primm family.

However, not everyone believes Lyle is a welcoming presence in the community. Mr. Grumps believes Lyle should be in a zoo. Soon, Lyle will have to do everything he can to establish that he belongs in his community. Shawn Mendes, Javier Bardem, and Constance Wu star.

There is no word on whether the film will be available on any internet streaming service. On October 7, 2022, the film will be available solely in theatres. It is anticipated that by the end of 2022, the film Lyle, Lyle, Crocodile will be accessible to view on one or more online streaming services such as Netflix, Hulu, Disney Hot Star Plus, Amazon Prime Videos, and others. Sony Pictures Releasing is set to distribute the picture in cinemas.

The cast of Lyle, Lyle, Crocodile is as intriguing as the film itself. The musical’s cast is led by singer-songwriter Shawn Mendes and Night books alum Winslow Fegley.

The Talks On Social Media About Lyle, Lyle, Crocodile

Based on the best-selling children’s book, the animated and live-action film follows Lyle, a friendly crocodile. Lyle, who lives in New York City, assists and entertains the Primm family.

However, not everyone believes Lyle is a welcoming presence in the community. Mr. Grumps believes Lyle should be in a zoo. Soon, Lyle will have to do everything he can to establish that he belongs in his community. S

I hope this film impresses everyone and allows him to show off his amazing potential in the film industry”. Another fan comments about the film,” This is adorable! It’s fantastic! It just appears strange to me right now.

I may have to get accustomed to it, but I adore Shawn Mendes and am thrilled that the artists who composed the music for The Greatest Showman are working on this film. I’ll certainly look into that.” As a result, we may assume that the film’s directors, Will Speck and Josh Gordon, will not disappoint their fans.

What To Expect From Lyle, Lyle, Crocodile?

It all starts with the Primm family’s relocation to New York City. Josh, the house kid, struggles to adjust to his new surroundings, as do most children. Then he discovers Lyle, their attic’s saltwater crocodile.

But that isn’t all. Josh has never seen a croc sing or boogie like this before. The two quickly become friends, and Josh has finally found his happy place. But, to his dismay, his parents appear to become concerned about having a carnivore in their home. Or the fact that this creature can walk, talk and sing.

Mr. Grumps, their next-door neighbor, is also dissatisfied. With everything working against them, Josh fights to save Lyle from being taken away. Then Hector, Lyle’s owner, arrives and demonstrates to the Primms how unusual and fun-loving his pet can be.

Lyle’s sweetness and charm quickly win over Josh’s parents. But Mr. Grumps is still on the hunt for the croc, and the Primm and Hector must work together to preserve Lyle and his skill.

Lyle, Lyle, Crocodile is ultimately about camaraderie and realizing that you may find your tribe in the most improbable places, with the most unlikely people. In a nutshell, this is a traditional family comedy with a musical twist.

Sony Pictures’ trailer for Lyle, Lyle, Crocodile exposes the audience to Lyle right away. And we quickly discover that he is not like the other crocs we’ve met. He is a refined, domesticated reptile that adores baths and caviar. Most significantly, he enjoys singing.

He may even be considered a music star. We also meet Josh, the youngster who moves into the same house as his family and quickly becomes friends with Lyle. The short provides us a glimpse of what is to come when Josh’s parents and their neighbour discover a deadly monster hidden in the attic.

Lyle’s owner and showman Hector Valenti, played by Javier Bardem, is also introduced. This is certainly not a part we’re used to seeing Bardem portray, so it may be something to look forward to. There’s a lot of humour, drama, action, and music and dancing.

What else do we require for total entertainment? Overall, Lyle, Lyle, Crocodile appears to be a pleasant family film that arrives just in time for the holidays.